In this article, we learn about what makes Bitcoin a currency as far as currencies go.

New bitcoins or Ether are introduced into circulation during mining. Miners compete to solve a puzzle and they are rewarded in bitcoin which is put into circulation. The coins are limited soon they all will be mined and in circulation after which no more can be mined. This ensures resistance to inflation.
Every four years the mining reward is halved, this is after the generation of 210K new blocks. At the writing of this, the reward is 6 BTC and the next halving is bound to take place on May 4, 2024.

Decreasing Supply Algorithm
In Bitcoin, a block is generated after every 10 minutes. In the case where the hash power of the network increases this time is reduced since miners will now have hash power that solves the puzzle faster, on the other hand, if the network shrinks so does the hash power and therefore this time increases, in worst cases, it could take 1 day or even a month to mine a block.

The rate of block creation is adjusted after every 2016 blocks to aim for a two-week difficulty adjustment period. This period is whereby the network tries to return itself to a 10-minute window of producing Bitcoins because in the two weeks new nodes could have been added and removed meaning the hash power has changed.

The following formula was chosen to approximate the rate at which commodities such as gold are mined, it is also used for Bitcoin's decreasing supply algorithm;

Bitcoin will last be mined in the year 2140, of course, this depends on the number of peers and the hashing power the network will have accumulated.
Only 21 million bitcoins will ever be produced. This does not mean that there will be 21 million Bitcoins in circulation. Some Bitcoins are lost in the blockchain because their owners lose keys or pass away without handing over the keys.

Attributes of a currency.

For a currency to be considered a currency, it has to possess six attributes;
These are;

Consider the following image that shows the degree to which gold, fiat currency such as USD, and cryptocurrency fulfill traditional traits of currency as well as new traits that are possible due to the invention of the blockchain; 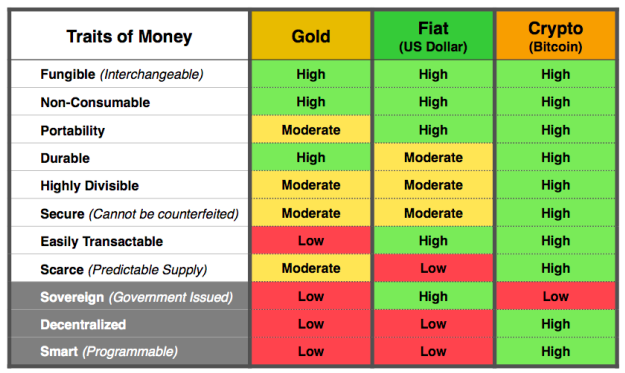 It is inevitable for fiat currency to deflate. This is whereby currency appreciates because of a mismatch in supply and demand which affects the value of a currency by making it go up. Price deflation means that over time the money will have more purchasing power.

In periods of deflation, people hoard money in hopes that prices will fall. In other accounts, deflation is associated with a drop in demand.

In a fiat currency-based system, it is hard to have a deflationary period unless there is a significant drop in demand and unwillingness by governments to print money.
In the bitcoin blockchain, deflation is caused by constrained supply, not a decrease in demand. Meaning its supply is limited and at some point, it will be depleted.

A pro of deflation is the opposite of inflation which leads to a debasement of the currency. Inflation means that people can easily borrow money and accrue debts that are later erased through currency debasement, printing at the expense of those who save.

This involves blockchain participants coming to an agreement of ownership, without the need for trust. Participants trust the technology rather than each other. However this is not the case with traditional monetary systems, in such systems, participants trust that a central authority will validate and verify all transactions and trust that they will not be tampered with. This also extends to technologies such as web 2.0.

The main concept bitcoin introduced was emergent consensus. It is emergent since it is not planned or timed, it comes about as a result of the asynchronous interaction of independent blockchain nodes that follow specified rules.

Miners stay on the network listening for new blocks, competing for the right to mine. The competition ends with the propagation of a new block. Then the race begins again. This continues until all bitcoins are in circulation.

Keep in mind that miners are motivated by the current market price of bitcoin - demand, if the demand is low, and the market is in a downtrend then miners find it economical to stop mining bitcoin and start mining another more profitable coin. During market uptrends, miners increase which leads to a higher hash rate which in turn is very important for the security of the network.

Note that if a miner owns or controls 51% of all available mining nodes then the blockchain is no longer decentralized, records can be changed by the majority which will make the other 49% nodes invalid. This is avoided by more participation on a public blockchain.

Gold is useful but cumbersome to carry around, paper money served as an improvement but can be counterfeited, or manipulated also it requires manufacturing, and storage and is immobile, and it also suffers from inflation.
Digital currency solves all these problems, it is mobile and has moved the concept of money from the physical to the functional.

Currencies both crypto and fiat are perceived as valuable because they can be used as both a store of value and a unit of exchange. In that, Bitcoin's value can be compared to that of precious metals such as gold, diamonds, etc. Both are limited in supply and have specific use cases. For example, both gold and bitcoin can be used as a store of value and as a unit of exchange.

For a currency to be useful it has to be scarce, divisible, accepted, portable, durable, and resistant to counterfeiting.
The main source of value for Bitcoin is in its limited supply, (21 million bitcoins) and increasing demand.