A node is a computer system connected to a blockchain network. In this article, we learn about the four major types of Bitcoin nodes.

In the previous article, we learned about the Bitcoin peer-to-peer network architecture. We learned that decentralized networks are a collection of decentralized peer nodes all involved with the management of the network. We said that in such networks all nodes are equal and have an equal status in the decision-making in a network.

Nodes in a Bitcoin blockchain are equal but can have different roles depending on the blockchain functionality they support. A full node is responsible for functions such as routing, mining, decentralized storage, and wallet services. 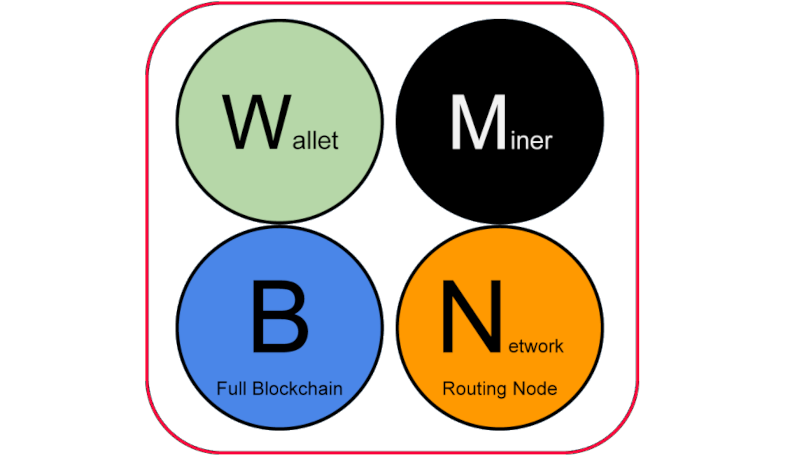 Among the above four functions, routing is universal to all nodes, meaning all nodes participate in the validation and propagation of transactions and blocks on the blockchain. A transaction that is deemed invalid by a single node is not propagated. This structure makes sure that transactions remain immutable. This also ensures transparency at the same time anonymity. All nodes are also responsible for the discovery of new nodes and the maintenance of P2P connections to them.

As we shall see in the next section, full nodes apart from routing can also be used for decentralized storage of transactions among other functions. These nodes are essential since they store the whole blockchain, other nodes use these as references. For example, if we were to participate in the Bitcoin blockchain by hosting a full node, our node will use an existing full node as a reference meaning we will have to download all transactions that have ever occurred on bitcoin.

In this article, we will learn about the various types of Bitcoin blockchain nodes and the roles each of them plays in the management of Bitcoin.

In this section, we look at the various types of bitcoin nodes and their roles.

The different types of Bitcoin Nodes are:

We will go into details of each node.

Mining nodes
Mining is the process of solving a complex cryptographic puzzle for incentives. This is also a way to add new bitcoins into circulation. Mining nodes are responsible for the creation of new blocks that are added to the blockchain.

Mining nodes are a network of miners and ASIC(Application Specific Integrated Circuits) responsible for confirming the validity of blocks through this process of mining. They maintain the blockchain network by creating, validating, and adding new blocks to the chain thus growing the network over time.

Light nodes
These are also referred to as thin nodes since they only store a copy of the entire blockchain. They download previous transactions' block headers to confirm a blockchains validity. Why the block header? A block header holds all information related to the previous blocks, mining time, nonce, and a unique identifier.

In most cases, a light node will need less computational resources such as RAM and hard disk space since they directly connect to a full node that maintains a copy of the whole blockchain.

Full nodes
A full node is probably the most important node since it maintains a copy of the whole blockchain, this includes all transactions that have ever occurred on the blockchain since the genesis block was created in 2009. These nodes are responsible for the distribution of blockchain copies to other nodes such as light nodes. They act as a reference point for the validation of a blockchain's transaction history.
Bitcoin has about 10000 full nodes. More full nodes in a blockchain network ensure security, immutability, and decentralization. In this case, if a single full node is corrupted, other full nodes will invalidate it. This makes sure that no single party can control the network.

Super nodes
These are nodes that operate around the clock. They connect full nodes to each other and spread the blockchain copy across the network. They serve as redistribution relays that ensure all nodes in the blockchain get an accurate copy of the blockchain.

Apart from the four major types of bitcoin nodes, we also have an additional 3 nodes. These are;

Pruned Full nodes
This is a node that saves hard disk space for users by pruning older blocks in the network. This node downloads the entire copy of a blockchain network.
It then starts deleting blocks starting from the oldest to the newest. This process continues until the node now only has the most recent transactions.

Authority Nodes
These are nodes that are used by consensus algorithms for blockchain networks that are not yet fully decentralized. A development team of the whole community can decide the number of authority nodes or the administrators for the authority nodes.

Master Nodes
This node's function is to validate and record transactions. They cannot add blocks to the chain. Users running master nodes earn rewards for their contributions.

Reasons to Run a Bitcoin Node.

At the time of writing this article, there are about 15820 reachable nodes running the network distributed among various countries on various continents.

A node can be any computer with enough resources to run the Bitcoin Core software. It has to store a copy of the entire blockchain, it should have networking to connect to other nodes in the network and propagate transactions. It should be able to validate and invalidate blocks and provide important information such as the number of blocks, transactions, wallet, and address information.

Running a Bitcoin full node means that we don't need to refer to other nodes from peers. Also, trusting others is not necessary. In this section, we look at the various reasons why one should consider running a Bitcoin node.

What happens if the number of nodes goes down?

In the case all nodes shut down, the Bitcoin network would cease to exist and without a network, there is no digital currency meaning no transactions will be processed or confirmed although they will be created and broadcasted. This is, of course, impossible since as the number of nodes decreases, so does the hashing power meaning that finding the next block could take months or years instead of 10 minutes, the transaction fees would increase significantly causing more miners to join the network.

A node is a computer system connected to a blockchain network. In the Bitcoin blockchain, we have four major node types, these are; full nodes, super nodes, light nodes, and mining nodes.

A blockchain is a ledger of transactions, all nodes in the blockchain contribute computational power in order to maintain this ledger.

Nodes are an important component of any decentralized blockchain network. They are responsible for maintaining the blockchain ensuring security, immutability, transparency, and decentralization among other important aspects of a blockchain.
Nodes follow rules in order to validate the blockchain, this means when all abide by the same rules, the outcome is the same.

Validation happens before mining. Consensus happens when mining nodes come to an agreement about the order of transactions. In general, mining and consensus are two different operations.

For Bitcoin to crash, all nodes around the globe would need to shut down. This is impossible. Although a weaker network is vulnerable to attacks such as the 51% attack.