In this article, we learn about transaction pools in Bitcoin, this is where validated transactions awaiting mining are stored.

The following image serves as a reminder of the life cycle of a Bitcoin transaction from when it is initiated to completion; 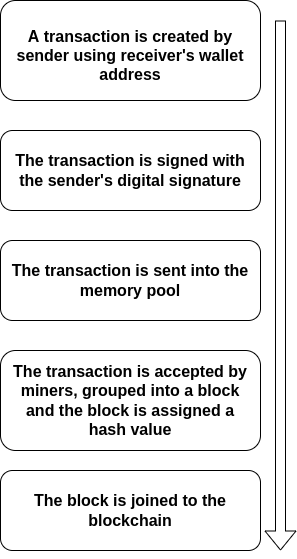 Transaction and orphan pools are stored in memory rather than persistent storage. In the beginning, a new node is empty, later on, it is gradually filled with new transactions received in the network.

Other implementations maintain a UTXO pool that stores all unspent outputs. Note that a UTXO pool is not similar to a UTXO set. A UTXO pool does not start out empty like a transaction or orphan pool instead has millions of entries of unspent outputs since the genesis block. This pool can be stored in local memory or an indexed database table on persistent storage such as a hard disk.

Addition
A transaction that is accepted into this pool should not cause conflicts with existing transactions. In addition to this, the miner also needs to impose a limit on how long they can spend validating complex SV scripts. For example, if a script takes more than a second to validate, it should be dropped. The mempool is limited in terms of the number of transactions it can hold, meaning that once it is full, restrictions are imposed until it becomes empty again.
A fee is imposed and all transactions have to pay it in order to be included in the pool.

Currently, the maximum pool size is 1 GB and the expiry age is 14days/226 hours.

There are cases whereby a transaction manages to make the cut into a pool by paying high fees but the fees are not high enough for the transaction to be processed immediately. In such cases, changing the output from the lower fee transaction is used to make a child transaction with high enough fees to pay for both parent and child. This means that even transactions a miner would not consider to mine are promoted into the mempool properly.

This pool tracks transactions that may need further revisions from the involved parties. Once finalized, they are moved into the primary pool. Note that submitting non-final transactions means that the users are committing to a payment, and if the transaction finalizes before it expires out of the pool, the payment will be executed.
The defaukt maximium size is 50MBs.

Removal
This pool performs periodic checks on all transactions, this is to check if a transaction in the pool is finalized or inactive.
A transaction is finalized if the lock time has passed. This in itself overrides all other pre-existing conditions that make a transaction non-final. It now becomes a candidate to move to the primary pool.

In this pool, the maximum expiry age is 4 weeks/28days, after which the transaction is dropped.

A transaction pool is a data structure that stores a set of transactions that have been validated and not yet mined.

In Bitcoin, transactions are received, verified, and added to the transaction pool awaiting confirmation the relayed to neighboring nodes for propagation across the entire blockchain.