In this article, we learn about blockchain forks, what they are, how they happen, and why they happen.

A blockchain is a decentralized database, every network peer stores a copy of the entire blockchain. In some cases, copies from different peers are valid but not always similar. This can be caused by blocks arriving at different nodes at different times leading to each having a different perspective of the blockchain.

This is resolved by each node selecting and attempting to extend the chain representing the most cumulative Proof-of-Work. In order for the chains to converge into a single chain, nodes have to select the chain with the most cumulative Proof-of-Work. Forks are just temporary inconsistencies in a blockchain resolved by reconvergences as more blocks are added to one of the forks making it the main chain.

As mentioned each node has a different perspective of the blockchain. As each receives blocks from neighboring peers, it updates its own copy of the blockchain by selecting the chain with the most cumulative Proof-of-Work. In the following diagrams in this section, each node has a shape representing the block it believes is at the tip of the current main chain.

This is demonstrated in the image below; 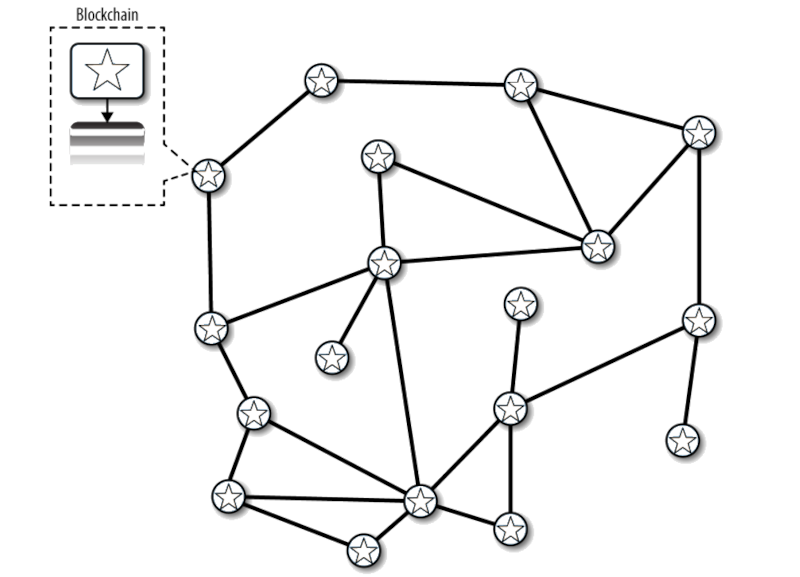 Above all nodes agree on a single tip which is a star.

In blockchain technologies, a fork is the result of two candidate blocks competing to form the longest chain. Forks happen when two miners solve the cryptographic puzzle at the same time and immediately broadcast their winning blocks to their immediate neighboring peers that in turn propagate the block across the network. Each node after receiving and validating the new block from each of the miners propagates to neighboring peers that incorporate it into their own copies of the blockchain thus extending the blockchain by one block. If a peer node later sees another candidate block that extends the same parent, it connects the second candidate to form a secondary chain.

The following image demonstrates the above concept; 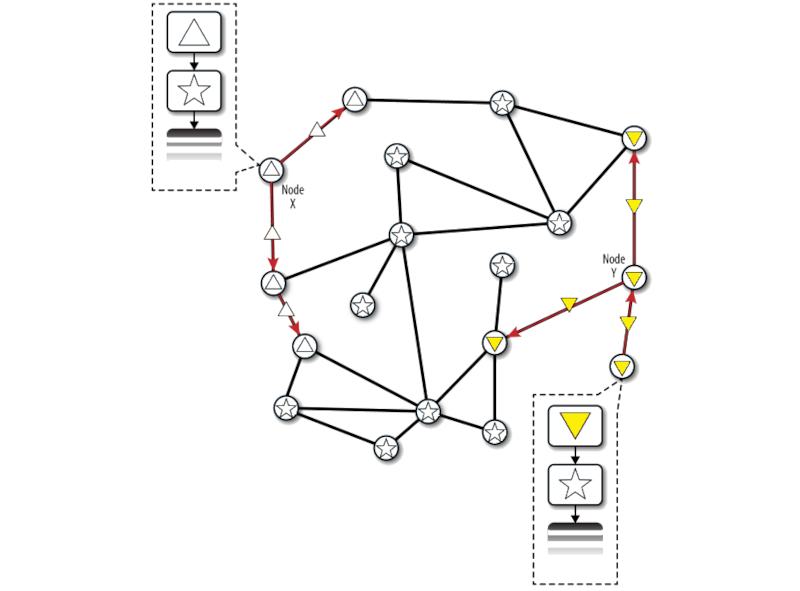 Above we have two miners who solve a cryptographic puzzle at the same time. Both blocks become children of the star block - main chain. In our case, we have the triangular block that originates from Node X(miner X) and a downward-facing triangular block originating from Node Y(miner Y). 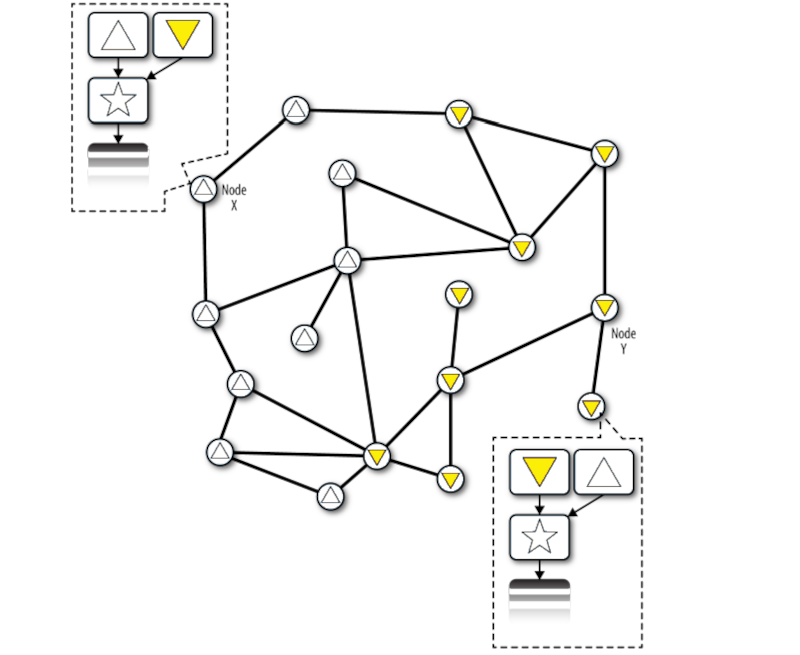 On the other hand, Node Y builds a chain based on the downward-facing triangular block. When it later receives the upward-facing triangular block, it connects it to the star block parent as a secondary chain. Neither chain is invalid, these are just different valid perspectives. A single chain is expected to come out as the winner and this is determined by the cumulative PoW for each. Nodes that agree with Node Y start mining a candidate block with a downward-facing triangular node as their parent extending the chain they believe to be the main chain. This is the same for nodes agreeing with Node X, they also start mining a candidate block that extends the chain with a triangular node as its tip.

Note that the network hashing power is also divided into two, the first is used to develop the downward-facing triangular chain and the second is used to develop the triangular chain. This computational power in most cases will be evenly split however a single side will most likely solve the cryptographic puzzle first and propagate the winning block before the other does. 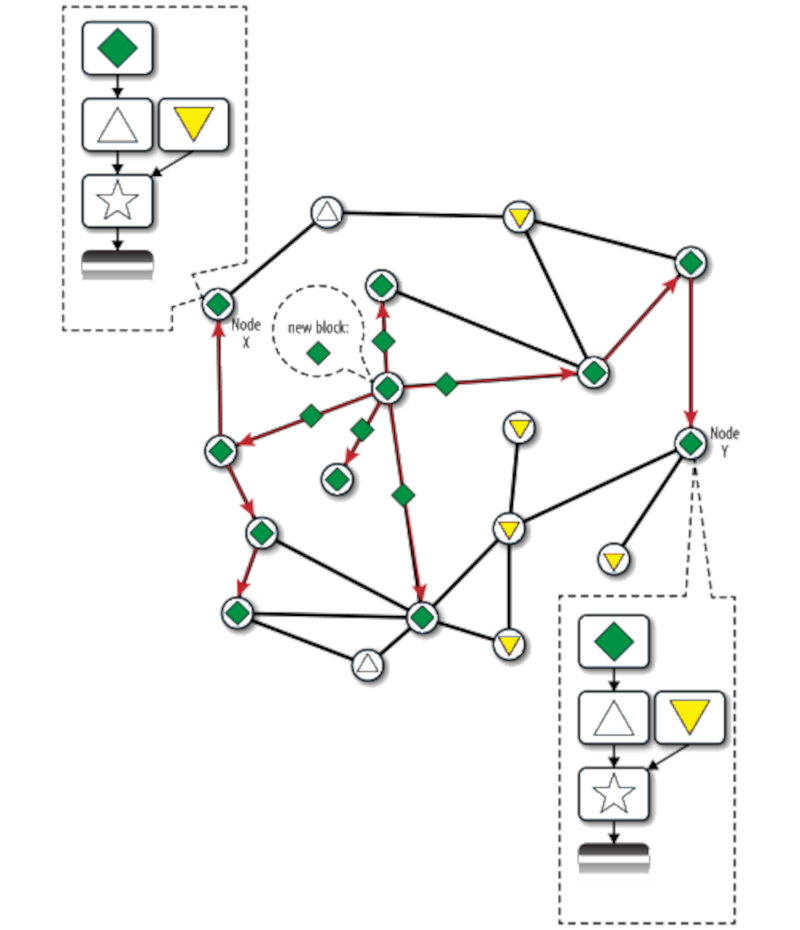 Now, since the star-square chain is now the longest chain, this is because it has more cumulative PoW(Proof of Work) than its counterpart, it makes other nodes select it as the main chain. This results in a convergence. Now we have a single chain that all peers agree on.

A reconvergence comes as a result of nodes revising their views of the blockchain to incorporate the new evidence of a longer chain - the main chain. A miner who previously worked on a candidate block that referenced the square chain as their parent now has to extend to the star-square chain since it is the longest chain.

We now have the network looking as shown in the following image; 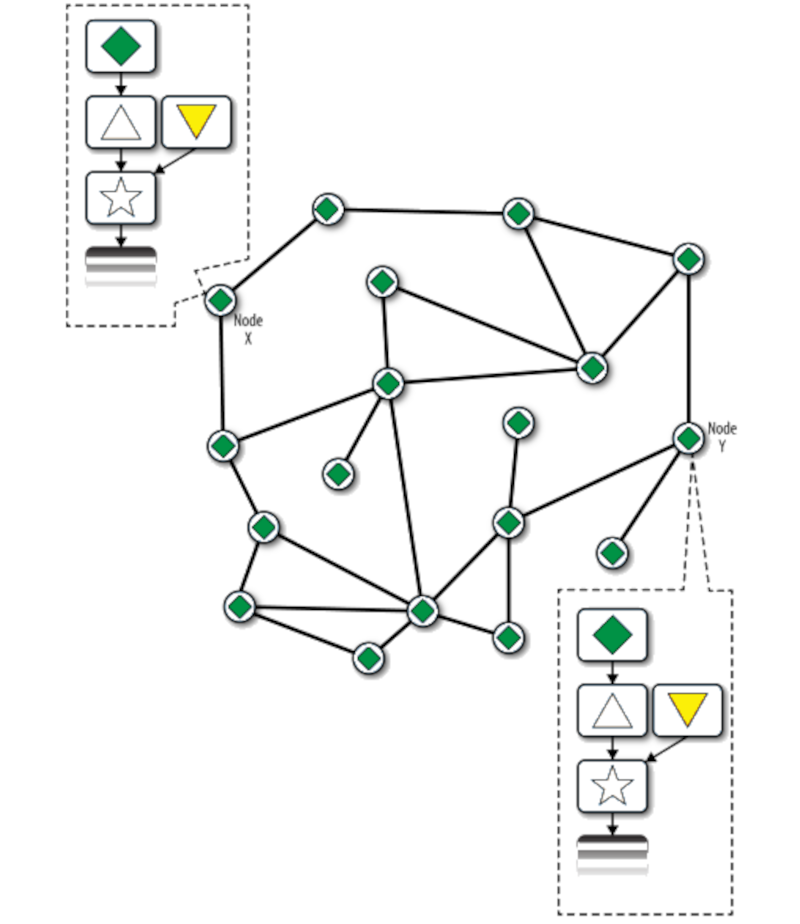 The 10-minute block interval is designed as a compromise between fast confirmation times and the probability of a fork. A faster block time leads to transactions being processed faster and more forks being created while a slower block time reduces the number of forks that can be created at a time but makes processing transactions slow.

This refers to Bitcoin's limited capacity to handle large amounts of transactions in a short period.

This comes as a result of the size of Bitcoin blocks which is small(1 MB). Remember blocks are responsible for storing transactions, the problem with Bitcoin is that the number of transactions it can handle compared to Ethereum is small.

Bitcoin's transaction processing capacity is limited by the average block creation time of 10 minutes. This combined with the small block size is a constraint on network throughput. That is, the network can only process 3 to 7 transactions per second.

Such issues are what cause blockchain forks to emerge. In the next section, we learn about the two different types of forks and give examples of Bitcoin forks that came about as a result of its scalability issues.

In this section, we learn about the major two types of forks that can happen in a blockchain, what causes them, and examples of both.

Hard forks result in two chains of the blockchain, one following a newer protocol and the other abiding by the old. The latter's nodes and transactions are rendered invalid through such a fork.
What does this mean for participants with a stake? Well, the coins are not lost as they are issued back in the new protocol. Miners have a choice on which blockchain they will choose to direct their computational power to.

Examples of hard forks in Bitcoin include; Bitcoin Cash, and Bitcoin Sv.

These forks when made result in previous transactions being invalidated. In this case, old nodes see the new nodes as valid this makes a soft fork backward compatible. For this fork to occur, miners must come to a consensus and decide to upgrade so the new features or rules can be incorporated into the network.

A soft fork can be used to add blockchain features such as new types of transactions, in this fork, miner nodes and other participants are left to understand the new transaction type.

Note that soft forks follow the same rules are their predecessor therefore, they don't need any node to upgrade for consensus to be upheld.
An example of a soft fork is the SegWit update made to the Bitcoin blockchain in 2015.

Blockchain forks occur when two or more blocks have the same block height.
Forks happen as a result of transmission delays in the network. Forks can also be induced deliberately as a result of disagreeing interests between participants or occur accidentally. The latter happens when two or more miners solve the cryptographic puzzle simultaneously. Intentionally induced forks aim to change the rules of the existing blockchain.

Intentional forks can be hard or soft. Hard forks change the rules of a blockchain. In this case, when the rules change, nodes/peers that agree with the rules upgrade their software and they are no longer participants of the old blockchain. Case on point, Bitcoin Cash - a hard fork of Bitcoin with lower transaction fees and faster than its predecessor.

Soft forks allow nodes to be backward-compatible. In this case, nodes can choose not to follow the new rules but remain valid.