Let us get started with Contractive Autoencoders.

A simple autoencoder is used to compress information of the given data while keeping the reconstruction cost as low as possible. Contractive autoencoder simply targets to learn invariant representations to unimportant transformations for the given data.

It only learns those transformations that are provided in the given dataset so it makes the encoding process less sensitive to small variations in its training dataset.

The goal of Contractive Autoencoder is to reduce the representation’s sensitivity towards the training input data. In order to achieve this, we must add a regularizer or penalty term to the cost function that the autoencoder is trying to minimize.

So from the mathematical point of view, it gives the effect of contraction by adding an additional term to reconstruction cost and this term needs to comply with the Frobenius norm of the Jacobian matrix to be applicable for the encoder activation sequence.

If this value is zero, it means that as we change input values, we don't observe any change on the learned hidden representations.

But if the value is very large, then the learned representation is unstable as the input values change.

Contractive autoencoders are usually deployed as just one of several other autoencoder nodes, activating only when other encoding schemes fail to label a data point.

Link between denoising and contractive autoencoder

There is a connection between the denoising autoencoder and the contractive autoencoder:

There are some important equations we need to know first before deriving contractive autoencoder. Before going there, we'll touch base on the Frobenius norm of the Jacobian matrix.

The Frobenius norm, also called the Euclidean norm, is matrix norm of an mxn matrix A defined as the square root of the sum of the absolute squares of its elements.

The Jacobian matrix is the matrix of all first-order partial derivatives of a vector-valued function. So when the matrix is a square matrix, both the matrix and its determinant are referred to as the Jacobian.

Combining these two defintions gives us the meaning of Frobenius norm of the Jacobian matrix.

The loss function is: 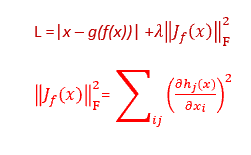 where the penalty term, λ(J(x))^2, is the squared Frobenius norm of the Jacobian matrix of partial derivatives associated with the encoder function and is defined in the second line.

Now calculate the Jacobian of the hidden layer of our autoencoder. Assume that:

where ф is sigmoid nonlinearity. To get the j-th hidden unit, we need to get the dot product of the i-th feature and the corresponding weight. Then using chain rule and substituting our above assumptions for Z and h we get: 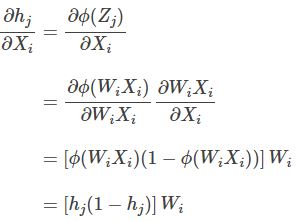 Our main objective is to calculate the norm, so we could simplify that in our implementation so that we don’t need to construct the diagonal matrix: 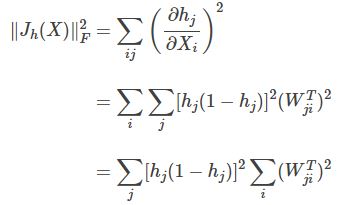 Below are the steps of the formula and how they can be used in code to derive the contractive autoencoder.

Import all the libraries that we will need, namely numpy and keras.

These lines take the input from the user

In this method we calculate loss function using the last formula

This completes the implementation of Contractive Autoencoders.

With this article at OpenGenus, you must have the complete idea of Contractive Autoencoders. Enjoy.