In this article, we learn how a decentralized system such as a blockchain addresses trust issues.

Bitcoin is described as a database modeled by a linear sequence of blocks, each block has cryptographic hashes that correspond to the previous and current block. These links between blocks form chains. The bitcoin blockchain is used for the exchange of value and all transactions that were ever made are stored in this decentralized database. 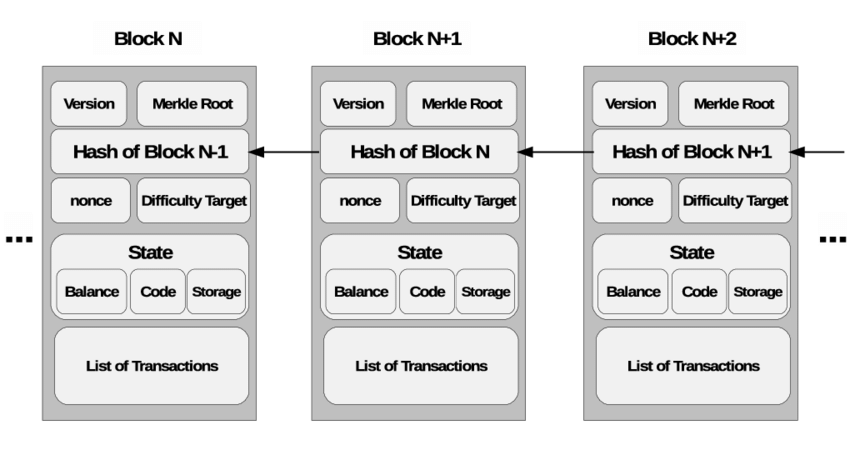 The above ensures the immutability of the database by each block using the hash of the previous header block hash in the current block. A block header stores the root hash of the merkle tree for all block transactions. This way if anyone decides to change a transaction, it will affect the local chain and render it invalid. As discussed in a previous article, once this happens, the block can no longer participate in blockchain activities.

In this article, we learn how a decentralized system such as a blockchain addresses trust issues.

Elements of Trust in a Blockchain.

In a traditional system such as a bank, all participants trust that a central authority will verify and validate and maintain immutability in transactions.

On the other hand, blockchains work in a similar way except there are no central authorities just mathematical algorithms executing on many different computers distributed across the globe with the same copy of a database.

Transactions between participants require that all participants trust the system and trust that it will perform as expected.

Elements of trust in a blockchain include;

A secure chain is consistent and as the chain grows, the trust level of the chain increases. Miners are always competing for the right of block-creation. On blockchains such as Bitcoin and Etherium, protocols have been implemented that are used to select miners who get the right to add their block to the chain. A common algorithm is referred to as PoW(Proof of Work). Just like all other blockchain operations, proof of work also uses cryptography.

This goes to show how cryptography is used in blockchain.

A secure chain in Ethereum is a single main chain with a consistent state, therefore, every valid block that is added to the main chain adds to the security and trust level of the blockchain.
This main chain will have the highest cumulative proof of work which is the sum of all PoW for all blocks in the chain.
Every miner hash a candidate block that he/she wants to add to the chain. A consensus mechanism is used to determine who gets to add his/her block to the chain.
PoW uses a hashing algorithm referred to as SHA-256.

The following image summarizes the process;

The first step is to compute the hash value of the block header elements which results in a fixed value and a nonce that is a variable, it can change.
If the hash value is less than the specified function difficulty, the puzzle has been solved. And the puzzle solver earns the right to broadcast his/her block. Other miners will add the winner block to the blockchain reaching a consensus.
If the puzzle fails to be solved, in this case, if the function difficulty is greater than the hash value, the process is repeated, this time the nonce is changed.

We can test this practically here. As you can see, once the nonce changes, the block itself and all other subsequent blocks become invalid.
In our case, the puzzle is similar except here it is invalid, now we have to find a nonce that makes it valid. The first to find the nonce wins and earns the right to create a new block and is also rewarded with coins.

Other protocols for consensus have also been developed and are still being developed. Some include proof of stake(PoS) and, proof of elapse time(PoET).