In this article, we learn about the ECDSA algorithm and how it is used in the Bitcoin and Ethereum networks to secure transactions and funds.

The ECDSA (Elliptic Curve Digital Signature algorithm) is a cryptographic algorithm used in the Bitcoin and Ethereum Blockchains. In blockchains, a combination of hashing and asymmetric cryptography is used to secure transactions and messages.

The ECDSA algorithm consists of two algorithms, the signing and verification that both use important variables to acquire a signature and then reverse the process of getting a message given a signature. This is what is used to control the ownership of coins on the bitcoin blockchain.

The following is an image of an Elliptic Curve. 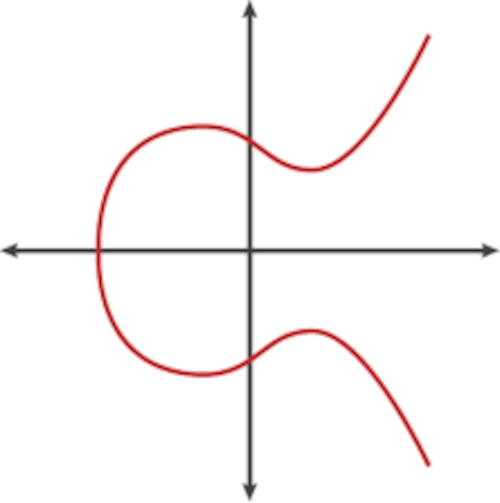 Public keys and digital signatures are points on the elliptic curve. If both points are generated from one private key, there will be a geometric connection between the points proving that the creator of the signature also owns the public key. Among the many different elliptic curves, secp256k1 is the one chosen for Bitcoin.

On the blockchain, all nodes recognize that a certain participant is the rightful owner of certain coins. In addition to this, the public-private key pair is also essential to be able to access and transfer funds. This is because a valid signature is needed for a transaction, a signature generated by a private key for the public key that was used to generate the signature.

In this article, we will learn about elliptic curves, elliptic curve cryptography, and the mathematics that goes into this algorithm. We will also implement the functions using the Python programming language.

Let's define an elliptic curve as a set of points that are described by the following equation;

Among the various types of elliptic curves, secp256k1 was chosen for the implementation of cryptography in Bitcoin.

Elliptic curve domain parameters over that are associated with the Koblitz curve are specified using a sextuple T=(p, a, b, G, n, h) where the finite field is defined by;

A compressed base point G;

The order n of G;

An example of a generator point on a bitcoin elliptic curve; 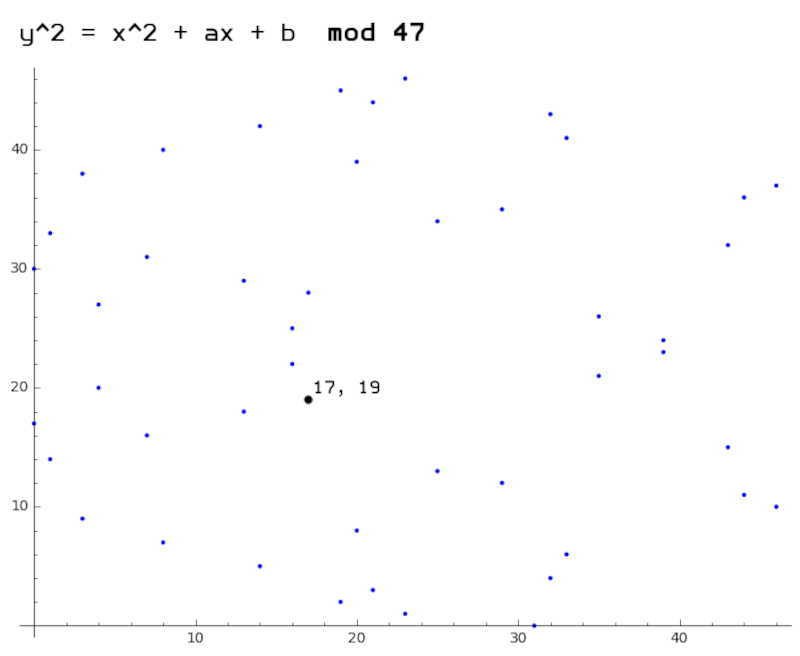 Bitcoin's curve is over a finite set of numbers, we use mod to restrict ourselves within a certain range. This breaks a continuous curve that can be achieved using real numbers.

In this section, we will be looking at different mathematical operations that can be performed on different points on the elliptic curve. The major two are double() and add() operations, occasionally, these are combined to perform a multiply() operation.

For us to perform double and add operations, we should be able to calculate the modular inverse of a number in a finite field. We will apply a multiplication by an inverse within a finite field to achieve a result close to a division operation.

That is, if we start at a number in a finite field and multiply it by another number, we can reverse back to the number we began with by multiplying it again by the inverse of a number we used during multiplication.

The inverse function looks as shown below;

Above we use the extended euclidean algorithm to calculate the modular inverse of a number. usually in mathematical equations modulus is denoted by a -1 as shown below;

Doubling involves adding a point to itself. For us to double a point we draw a tangent to the curve at a point and then find a point on the curve which the tangent intersects with. We then take the reflection of the point across the x-axis. This is demonstrated below; 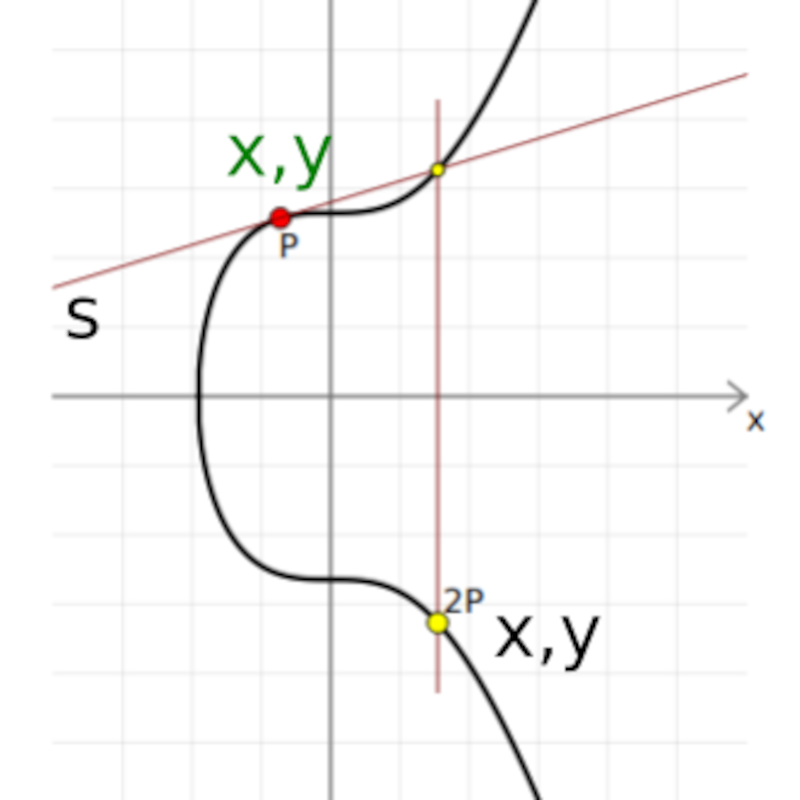 Let's implement this in python;

Adding two points together on a curve involves drawing a line between them and finding a point on the curve where the line intersects with the curve. We then take the reflection of this point of intersection across the x-axis; 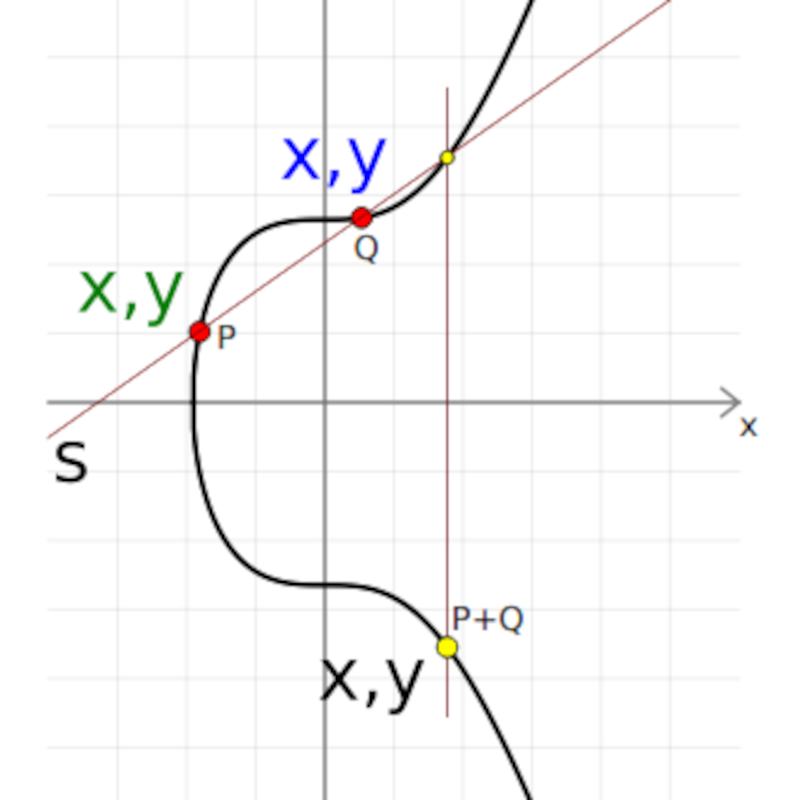 The implementation in python is shown below;

Multiplication is very important in elliptic cryptography. A double-and-add algorithm is used. It implements both doubling and addition for it to reach the targeted multiple using the least number of operations.
For example, starting at 2 we can reach the target multiple 64 using five double() operations. This is shorter compared to using add() operations.

The python implementation is shown below;

The ECDSA algorithm is responsible for securing transactions and coins in Bitcoin and Ethereum blockchains.
An elliptic curve is a set of points described by the equation; y^2 = x^3 + ax + b mod p.
Two major operations double() and add() operations are foundational to elliptic curve cryptography in the generation of public-private key pairs and digital signatures in the ECDSA algorithm. Occasionally, these two are combined to perform a multiply() operation.

With this article at OpenGenus, you must have the complete idea of ECDSA Algorithm and Elliptic Curves.