In this article, we learn how the ECDSA algorithm is used in Bitcoin to generate public keys and sign transactions thereby securing the blockchain.

In the previous articles, we learned about Elliptic Curve Cryptography, how it works, mathematical concepts behind it. We also saw how it is difficult and computationally demanding to be able to recover the private key just by having the public key.

We learned what a trap door is and saw its application to public-key cryptography.

In this article, we will see how ECDSA cryptography is used in the Bitcoin blockchain. We will use the elliptic curve theory discussed in previous articles to create public keys and sign and verify transactions, just like the bitcoin blockchain does.

Consider the following image, it demonstrates how a public key is placed inside a locking script in output. 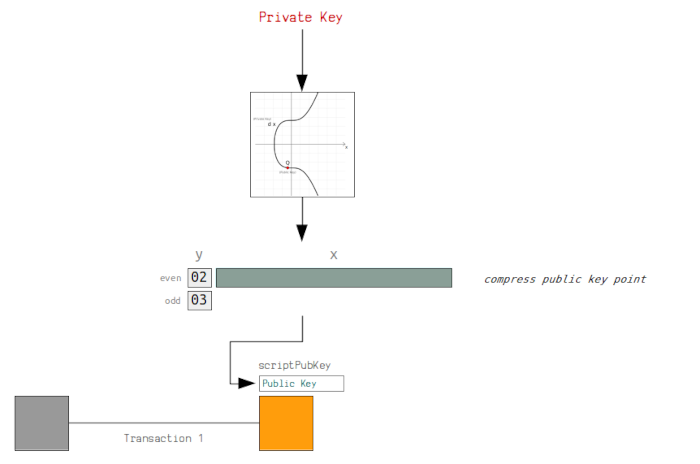 As mentioned previously, the public key is the multiplication between the generator point and the private key. It is a point on the elliptic curve comprising of x, y coordinates.

Bitcoin converts these into hexadecimal format as shown below;

We can prepend zeros as padding if necessary to reach 32 bytes.
Elliptic curves are symmetrical, this means that every x coordinate has two possible y coordinates, one even and the other odd. Therefore we can use a prefix to specify the y coordinates we are using for a point. This means the public key is halved in size and this makes transactions smaller and faster.

Examples of prefixes include;

For our public key, we have an even y coordinate, to shorten the key, we use 02 with the full x coordinates as shown below;

To be able to receive bitcoin from the sender these keys are placed inside a locking script on an output transaction. This makes sure the bitcoin can only be spent by the recipient. This information is broadcasted to all network nodes.

In order to sign a transaction we first have to construct it, this involves specifying the message. Secondly, we use the private key to sign the message and finally package the message inside the transaction.

The following is a demonstration of how transactions are signed in Bitcoin. 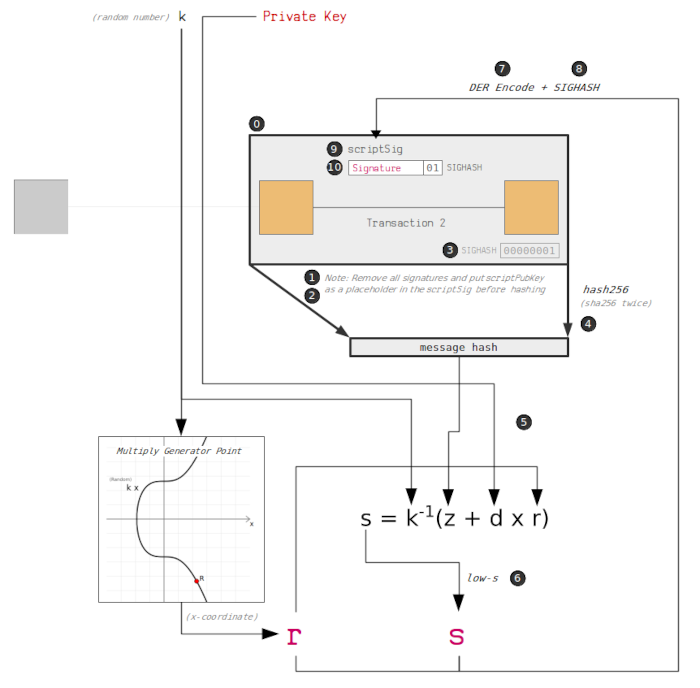 The steps in the image are explained below; 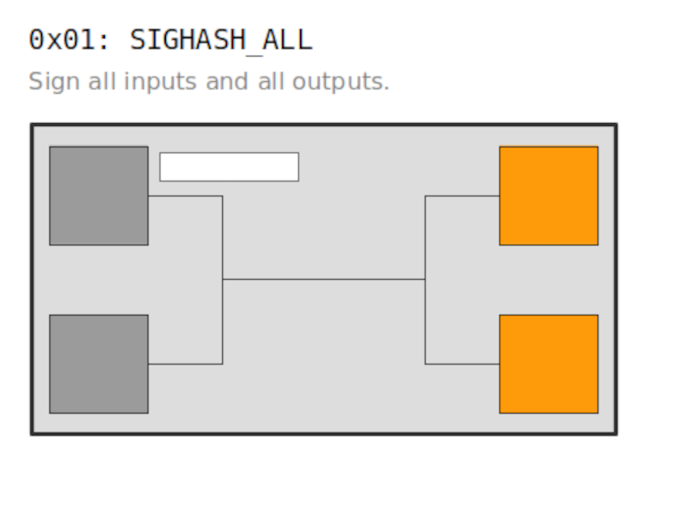 A common signature hash - SIGHASH_ALL(0x01) indicates that the signature coves all inputs and outputs in a transaction are used. It means that no other party can add any additional inputs or outputs later. 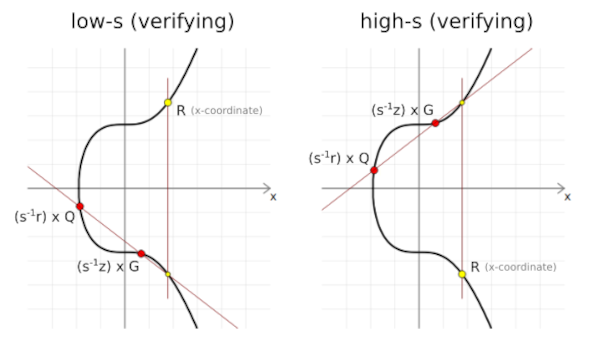 From the image, the additive inverse of s can be used to calculate the opposite points on the curve during the validation of digital signatures, the x-coordinate of the third point will be similar.

The discussed steps apply to all inputs we wish to unlock. This improves the security of transactions in Bitcoin.

A private key is a randomly generated number. We convert it back to an integer if it is in a hexadecimal format so we can use it in elliptic curve multiplication.
A public key comes as a result of the multiplication between the generator point and the private key.

Elliptic curves are symmetrical, therefore every x coordinate has two possible y coordinates, one even and the other odd.

With this article at OpenGenus, you must have the complete idea of ECDSA in Bitcoin.