In this article, we learn about the Ethereum blockchain incentive model and touch on new the proof-of-stake consensus mechanism.

Mining for example bitcoin or Ethereum mining is how new crypto coins are added into circulation. At the time of writing this, we have 19,043,450 bitcoins in circulation, 1,956,550.0 that are remaining to be mined, that is 90.683% of bitcoins issued meaning an average of 900 bitcoins are being mined per day. Bitcoin is a limited resource and this is enough to guarantee resistance to inflation.

Mining is also how a blockchain network confirms transactions that are gathered into blocks and chained to form the immutable distributed ledger. The first computer that solves a computationally taxing problem specified by the network is awarded a specific amount of coins as a reward. For bitcoin, it is currently 6.25 bitcoins and for Ethereum, it is 2 ether.

This reward is important as it motivates participants to make sure transactions and validated, it also attracts more people and grows the network, and the more the nodes, the more the immutability, security but this also means more power needed, slow network, etc.

Mining ensures the network is secure by validating transactions, gathering them in blocks, verifying the blocks, and finally broadcasting them to the whole blockchain.

All actions on the Ethereum blockchain have gas fees, as discussed in the previous article, fees make sure that all transactions are intentionally initiated and that smart contract code is safe, also we avoid infinite loops of computational wastage in code.

Operations on the blockchain such as loading from memory, storing to memory, transaction base fee, and creation of contracts all have varying gas costs. It is a fee structure. If fees specified in the fee structure are not met by a transaction, the transaction is rejected. This can be compared to sending a text without sufficient airtime. The text will not be delivered because of insufficient funds.

The following image from the Ethereum yellow paper summarizes the gas fees for different operations on the Ethereum blockchain. 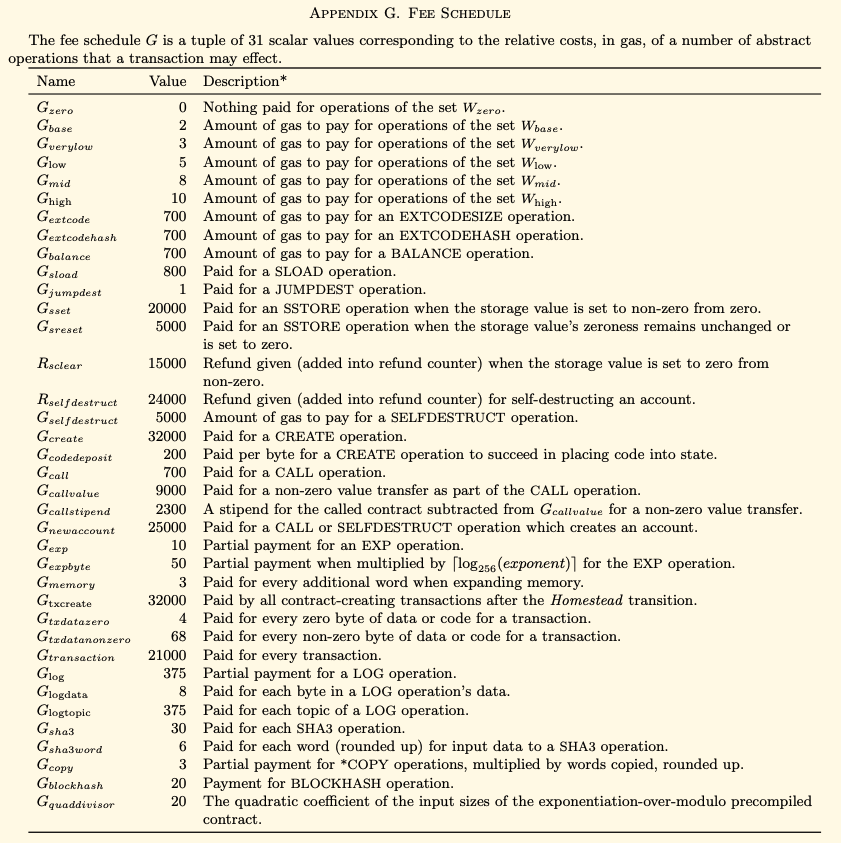 From the image we have a set of operations namely;

The remaining amounts after execution of a transaction are returned to the source account.

Gas in blocks
A gas limit is the maximum amount of gas a block is willing to spend on a transaction. Transactions and smart contract execution have varying gas limits, the latter is more computationally demanding compared to a simple transaction.
For example, a block could have the following specification;

On the other has GasSpent is the actual amount that is spent at the end of block-creation.

The miner who solves the specified puzzle - the 'PoW winner' creates a new block and is awarded 2 ETH at the writing of this article. The miner also gets gas points for the execution of smart contract transactions.

Other miners who successfully solve the puzzle later ommers are also awarded an incentive although lower than that of the winner. This ensures network security. Blocks created by ommer participants are referred to as ommer blocks. They are also added to the chain.

Remember PoW was created for Bitcoin to make sure nobody could trick the system. For example, for a block to be valid, it took a specific amount of time and computational resources(10 minutes) before the computer presented a valid solution. This is a form of upfront investment miners make with hopes of getting rewarded. In Bitcoin, this investment was hardware whereby miners could invest millions in hardware equipment and electricity costs to mine blocks. This has led to server farms being built around the world by the financially able for this purpose since finding the nonce meant making trillions of guesses and the more powerful a computer is, the higher the number of guesses it could make. Also, the larger the mining setup, the more the cost savings which translates to a greater market share by these miners. This although effective, works against the core principles of a blockchain - decentralization. In other words, any system that uses a proof of work consensus mechanism such as Bitcoin is bound to centralize at some point as the difficulty increases. In Bitcoin, mining is handled by a specific few who have the resources leaving other miners unable to compete.

PoS(Proof of Stake) was proposed as a solution in 2011. This form of consensus mechanism does not need costly investments in mining hardware rather mining blocks are done by validators. In this case, instead of using costly hardware, miners invest in the native coins of the blockchain. That is, for a validator to mine a block, he/she is required to lock coins(32 eth) or stake them in a smart contract. Here the miner will send coins to his/her wallet address and the smart contract holds these coins in the wallet.

Some of the benefits of such a consensus mechanism include;

More on this can be found on the Ethereum website, the link is provided in the reference section.

Stopping and operation and returning costs zero gas fees.
Every Ethereum participant on the Ethereum blockchain pays a minimum of 21000 gas for any transaction and 32000 gas for contract creation.

Miners receive an incentive for verifying new blocks or transactions which are later added to the blockchain, distributed ledger. The probability of solving the specified computationally taxing puzzle specified by the network is related to the network's total mining power.

All transactions on Ethereum require fees, fees are incentives to miners. This includes smart contract execution. Miners secure, validate, execute smart contracts, and create new blocks. This is what they are paid for.

A GasLimit is the amount of gas spent at the end of block-creation.
Miners who solve the puzzle but don't win block creation rights are referred to as ommers.