In this article, we learn about the different types of nodes, protocols, edge routers, gateway servers, and wallet clients that interact together to form the extended bitcoin network.

We learned that in a Bitcoin network, all nodes run the bitcoin peer-to-peer protocol. We also learned that additional protocols exist to manage other aspects such as mining and lightweight wallet clients. These functions are managed by gateway routing servers that access the network using the P2P protocol and then extend the network to additional nodes running other protocols.

Therefore an extended Bitcoin network includes the network running Bitcoin's P2P protocol as well as other nodes running specialized protocols. That is, apart from the main network that uns about 5000 to 8000 nodes that run various bitcoin client versions including a few hundred nodes that run other bitcoin implementations of the protocol such as Bitcoin Classic, Bitcoin unlimited, BitcoinJ, and bcoin among others.

This also includes a small percentage of mining nodes that are in constant competition for mining privileges, transaction validation, and block creation. It is also common for large organizations to have specialized interfaces to interact with the blockchain. The interfaces run full nodes of the Bitcoin core that hold full copies of the current state of the blockchain, however, in this case, these don't have mining and wallet functionalities. Such nodes act as network edge routers that possess services such as crypto exchanges, block explorers, payment processing systems, and wallets built on top of them.

An extended network comprises of additional specialized protocols running on top of the Bitcoin core peer-to-peer protocol. An extended network consists of pool servers and protocol gateways that connect other nodes running different protocols on the main Bitcoin peer-to-peer network. In most cases, the protocols involve pool mining nodes and lightweight wallet clients that don't carry the full blockchain copy.

The following are the different types of nodes that are involved in the extended bitcoin network;
Reference Client
This is a node containing a wallet, the copy of the full blockchain ledger/database, and a miner and is also able to perform routing of network traffic. The image below summarizes its functions; 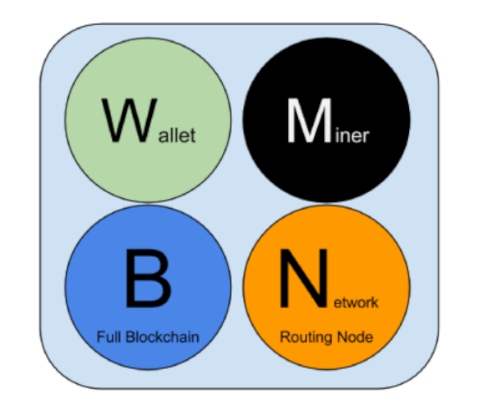 Full Bitcoin Node
This node also holds a copy of the entire blockchain database. It is also able to perform network routing functions. These nodes are able to verify bitcoin transactions without the need for external reference. They use the network to receive information on new blocks then verify the transaction and update themselves. The following image summarises its functions; 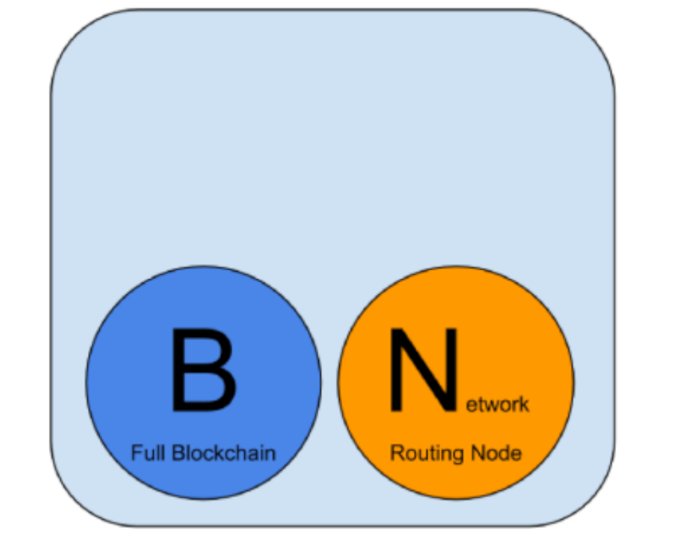 Solo Miner
A solo miner node can perform mining functions and also store a copy of the full Bitcoin blockchain ledger. In addition to that, it is equipped with network routing capabilities. This is demonstrated below; 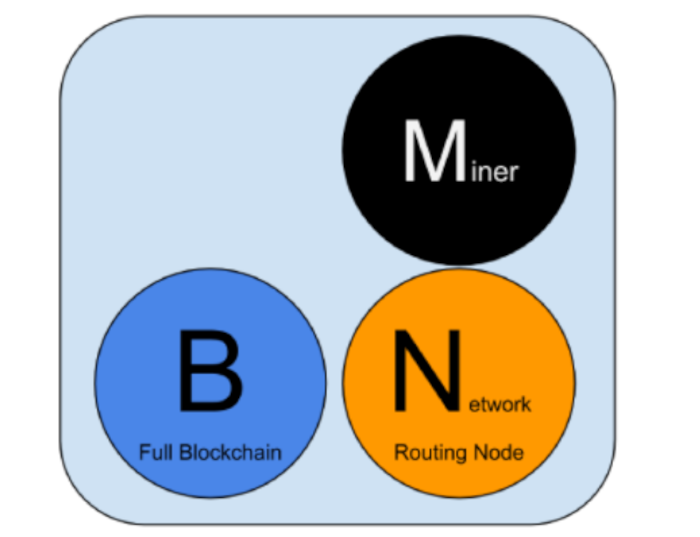 Lightweight (SPV) Wallet
This is a lightweight wallet. It is so because it only maintains a small portion of the whole blockchain database. They only download block headers instead of the full copy. Lightweight nodes verify transactions using SPV (Simple Payment Verification). Lightweight nodes can run on computationally constrained devices such as mobile phones and tablets. They also have network routing capabilities which they use to communicate with peers so they can get the full picture of the blockchain before verifying a transaction. The following image summarizes its functions; 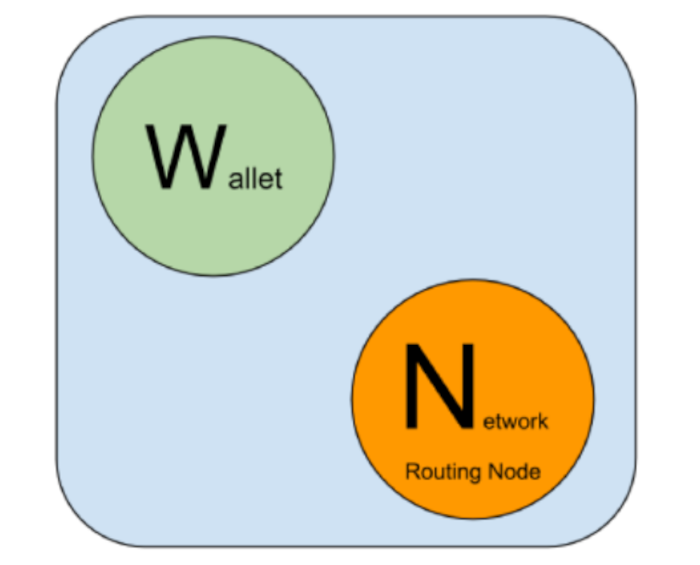 Pool Protocol Servers
These are gateway routers that connect peer-to-peer network nodes that run on other different protocols. Examples include pool mining nodes - this is whereby miners pool their computing resources in order to mine and then share in the bitcoin reward. Stratum is another example. It is a mining communication protocol that enables miners to efficiently fetch jobs from mining pool servers. The following image summarizes the function of pool protocol servers. 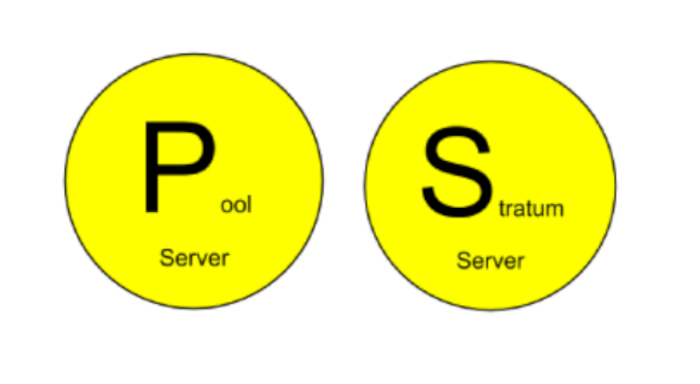 Mining Nodes
These nodes only have the mining function. Mining is the activity by miners whereby they compete to create new blocks. Mining can be done by a full node or a lightweight node. Miners can also opt to join mining pools, in such cases, they depend on a pool server that maintains a copy of the full blockchain database. They are also able to implement stratum protocols and other pool mining protocols.

Lightweight (SPV-Simple Payment Verification) Stratum Wallet
These nodes have a wallet and other network capabilities such as routing. They use the stratum protocol without the need for a copy of the full Bitcoin blockchain database. 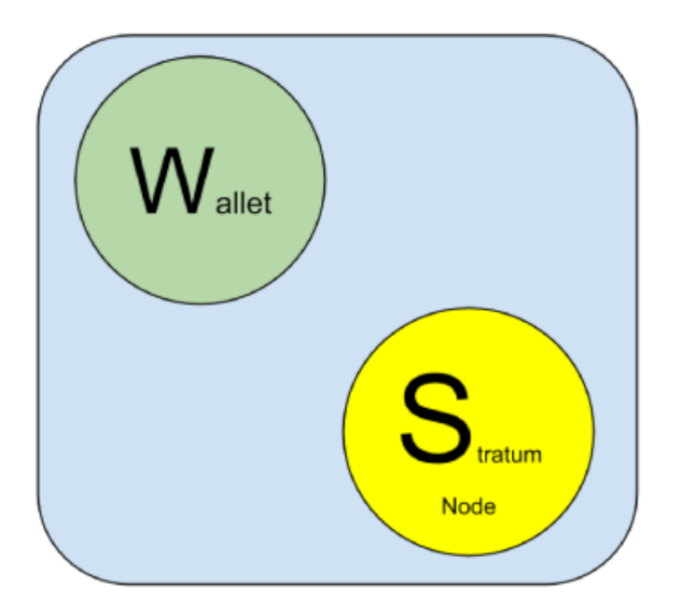 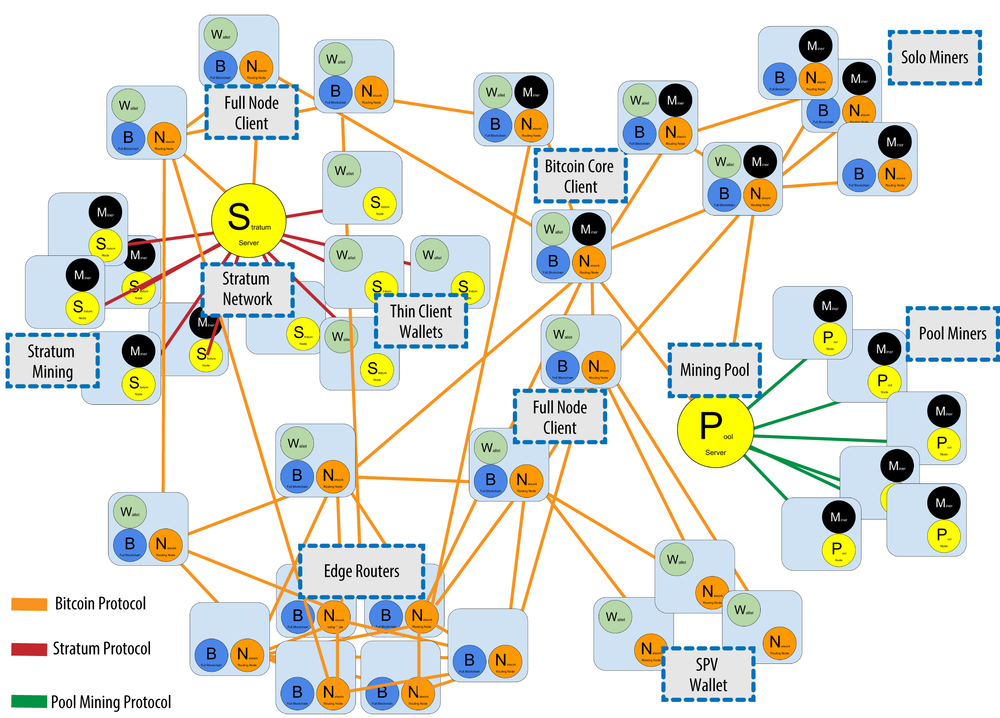 An extended bitcoin network involves the network running the bitcoin core peer-to-peer protocol as well as other specialized protocols.

During bootup, a node used TCP protocol on port 8333 to discover neighboring nodes. This is done by querying a DNS server that responds with a list of IP addresses.
A full node maintains the full copy of the blockchain database, the first order of business after it is online is to update its local copy.

The version message is the first message sent by a bootstrapping node to an already connected node. This message contains the protocol version used by the node among other information that is used to identify the node.

With this article at OpenGenus, you must have the complete idea of Extended Bitcoin Network.