In this article, we learn how hardened child keys are derived, what key identifiers are, and how to navigate the HD wallet tree structure.

In this article, we will look at a practical application of Extended public keys and the shortcomings, we will see how the shortcomings are managed through hardened child key derivation and how to navigate an HD wallet tree structure.

An extended key could be a private or public key that can be used to derive new keys in HD wallets. That is, given a single extended private or public key, we can use it as a source for all child public keys. An Extended public key - Xpub is a Bitcoin standard that was introduced by BIP 32. BIP 32 is a Bitcoin Improvement Proposal that introduced HD wallets and Extended keys to Bitcoin. For more on this, refer to the Github link in the references section.

We learn that public keys can be known to the public without any severe implications. On the other hand, sharing extended public keys should only be to trusted parties. This is because it exposes one to the situation whereby an untrusted party can derive all the child public keys from the xpub and therefore view all past and future transactions of the owner.
In most cases, users use xpubs to receive funds that go to cold storage directly. In such cases, the private key remains offline while the extended public key sits on a server generating new wallet addresses for each transaction.

Consider the following scenario, Alice has an online shop where buyers come to buy stuff. Buyers usually pay Alice in Bitcoins, Alice hooked her bitcoin wallet address to the site so that her customers can send her money for fulfilled orders. As time went by, Alice managed to acquire more customers, meaning more transactions were being processed and more funds were being sent to her wallet.

More customers meant more transactions with the same bitcoin wallet address, at times, Alice would confuse and mix up orders because of the volume and the similarities of the orders. To solve this Alice adopted an HD Bitcoin wallet, which allowed her to derive public child keys for every transaction without the need for a private key. It also made the management of orders and keys easy. This is because each order sent funds to a unique bitcoin address and keys all were related to a single private key that was kept hidden. This meant that only Alice can spend the bitcoins sent to her using the private key while still using unique wallet addresses for each transaction and receiving funds from buyers.

The use of an HD wallet made it easier to manage keys, export, import, and migrate to new compatible wallets among other benefits. It also meant that the website could be hacked and hackers would turn up empty-handed since the private key is not loaded on the site.

The following is an image demonstrating hardened child key derivation; 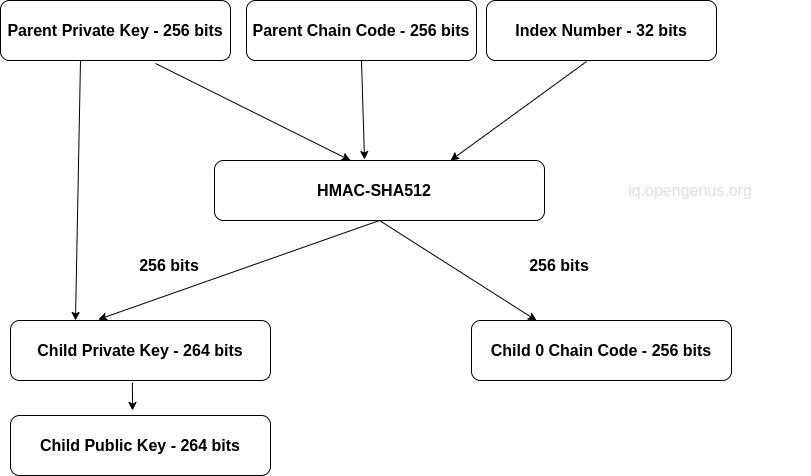 From the image, notice how the hardened derivation function is similar to a normal child private-key derivation, the only difference is that the parent private key is used as input to the hash function. Using this function makes sure that the resulting child's private key and the chain code are different. The branch which is a result of the function is used to produce extended public keys that cannot be hacked since the chain code cannot be exploited to reveal private keys.

To find out the ancestry of a key, we read from the right until we reach the master key from where it was derived from. E.g, m/n/o specifies a key that is the Oth child of key *m/n which is the nth-child of m.

Two standard BIPs 43 and 44 were proposed to solve this complex issue. We learned about the BIPs and the different types here. The former proposes the use of the first hardened child index as a special identifier to represent the 'purpose' of the tree structure. Based on this, a HD wallet can only use a single level-1 branch of the tree whereby an index number identifies the structure and namespace of the remaining tree by defining its purpose.

The latter proposed a multi-account structure as 'purpose' number 44' under BIP-43, meaning that all HD wallets abiding by this structure are identified using a single tree branch - m/44'/. This BIP proposal consists of the following 5 tree levels;

The following are various examples of BIP-44 HD wallet structures;

A child's private key that has been disclosed combined with the chain code can be used to derive all private keys of all children.

To use extended public keys and still keep hackers at bay, we should use derive the key from a hardened parent rather than a normal parent. It is best practice to derive all level 1 children of master keys using a hardened derivation function. This ensures that the master keys are not compromised.