What is Fraud Detection

Fraud detection is the process of detecting fraudulent feats in credit card transactions. Fraud detection can be vaguely classified into anomaly detection. Frauds in transactions have been prevalent throughout the past years leading up to losses of nearly 1 billion dollars per year and growing. Fraud detection was used as a mechanism to tackle the frauds occurring during transactions and a modern approach to it was to use machine learning models to detect frauds.

Fraud detection can be handled using two main approaches which are:

About the Fraud Detection dataset

The dataset consists of only numerical values after PCA was performed on it. The dataset does not reveal the original features due to confidential issues. The features V1,V2,V3,....V28 are the result of PCA and are the principal components which are obtained. Along with these , we have the ‘Time’ and ‘Amount’ features which have not been transformed with PCA. The ‘Class’ feature is a type of variable which takes in a value of 1 (fraud) and 0 otherwise.

Before building our machine learning model, we will now try to figure out an approach to Identify fraudulent credit card transactions present in the dataset.

Given the class imbalance ratio, we recommend measuring the accuracy using the Area Under the Precision-Recall Curve (AUPRC). Confusion matrix accuracy is not meaningful for unbalanced classification.

To Detect the frauds in this dataset we use the following steps:

More detail regarding the above steps are elaborated and explained in each of the code sections below.

The first step to building a machine learning model is to make the necessary imports required to build and preprocess the data.

These are the primary imports made which will be further used to preprocess the data.

The next step is to read the dataset using the “pd.read_csv()” , followed by the “.head()” command which allows us to view the first five column entries of the dataset along with their respective features. 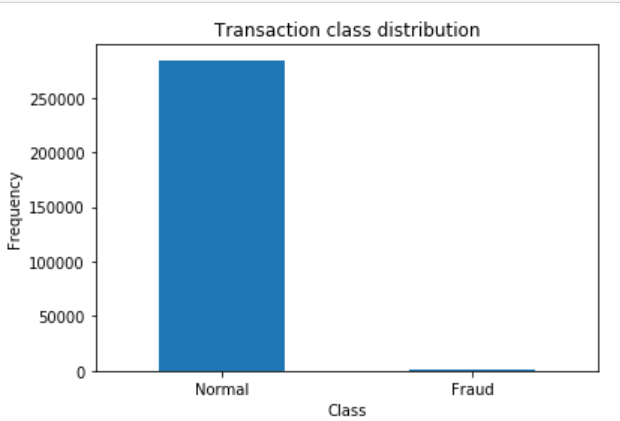 After visualizing the data, we notice that we have a very unbalanced dataset as the normal transactions outweigh the number of frauds committed.

Due to this rarity we perform a stratified sampling on the dataset in order to avoid the result that the model gave as “0” most of the time.

Stratified sampling is a type of sampling method which is used in a large population of data to divide it into small groups or form a subset of the data called as strata in order to organize and finish the sampling process. After the subsets are formed we randomly select the sample proportionally.

This type of sampling is mostly used when we are trying to draw several conclusions from different subsets of data.

The above code can be used for stratified sampling, it also helps in balancing the ratio between 0 and 1 datasets.

It also helps with:

Output of the above code is:

Output of the above code is:

The code above helps us to shuffle the dataset. We use the “shuffle” keyword present in the sklearn.utils library.

It is also known as Min-Max Scaling :

The above code will help normalize the values present in the dataset within the range of [0,1].

The above code shows the neural network implemented along with the number of layers which are required for the dataset.Here we use the keras framework to build the sequential model. This is a simple 6 layered neural network which gives an accuracy of more than 98%.

The output of the following code is: 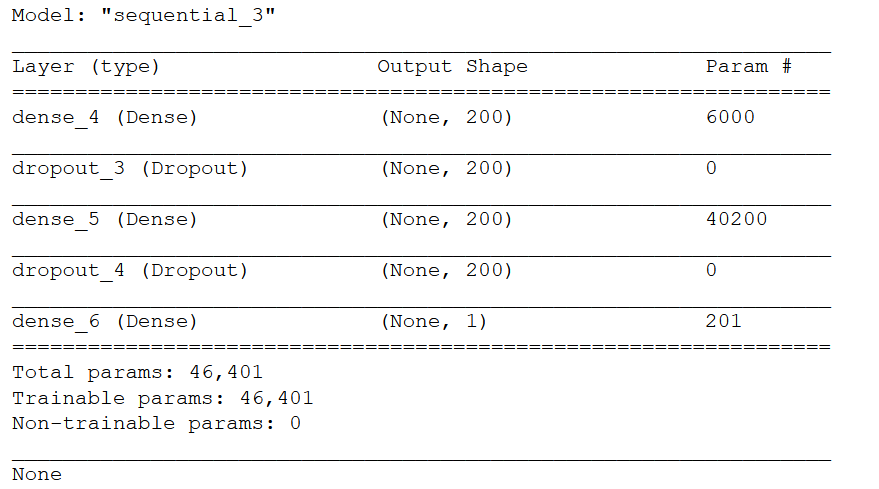 The model.summary() function shows us the summary of the entire model along with the number of parameters present in each layer of the model.

The next step would be to compile the model using the “model.compile” function in which we specify certain parameters such as the “loss” , “optimizer” and “metrics” parameters. Here we use the:

To progress further, we need to use the “model.fit” method which is :

The output of the following code is: 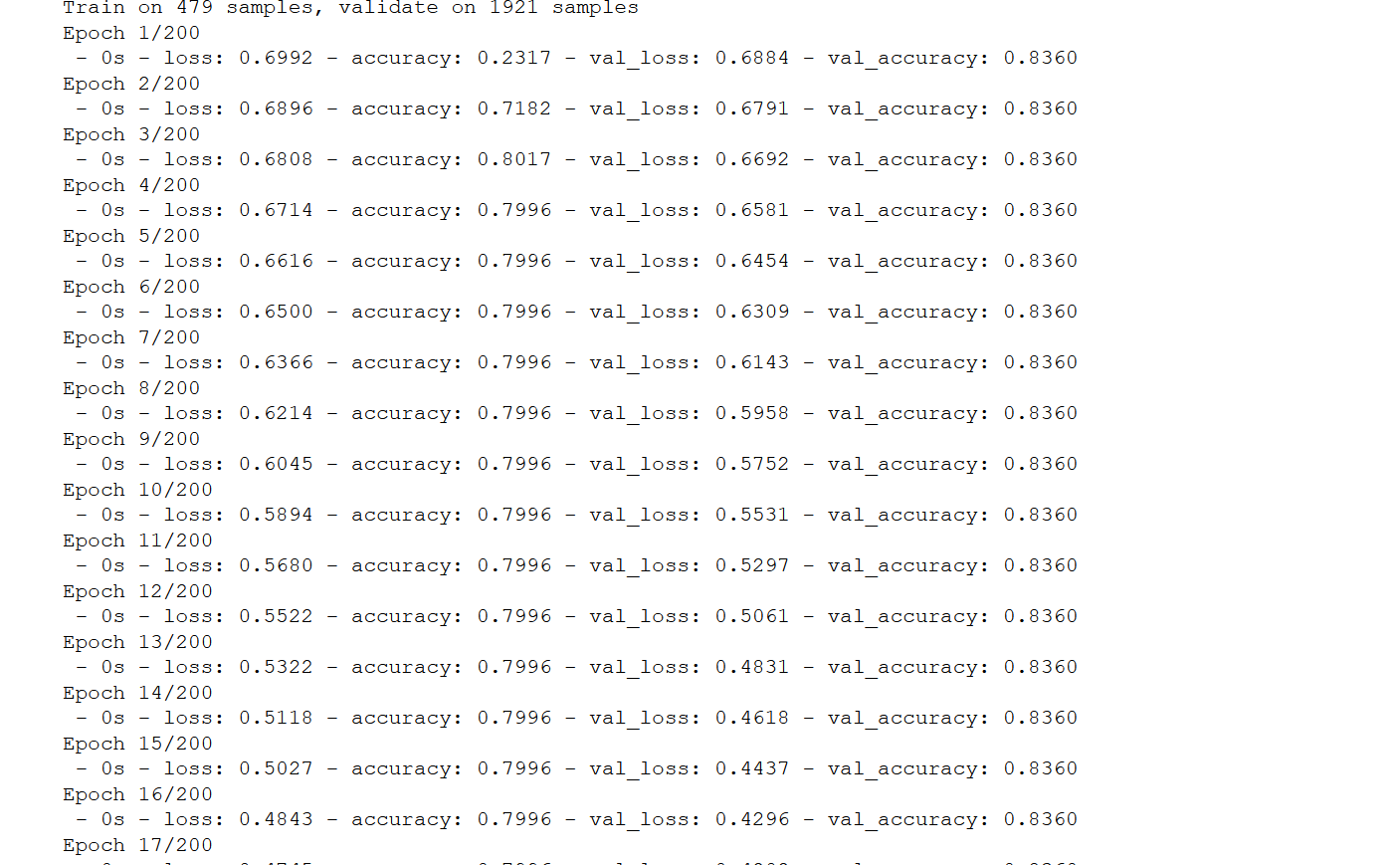 Here in the above code we use the model.fit method specify:

After this step, we move on to plot the accuracy against the validation accuracy in order to make sure that we are progressing in the right way and are not overfitting the data. We also plot the graph between the “loss” and the “validation loss” to track it’s progress.

We use the “model.evaluate” to evaluate the model and figure out if we have used the best parameters for the given problem.It has 3 main arguments which are the test data, test data label and the verbose.

After executing the above code, we observe the following graphs and the accuracy presented. 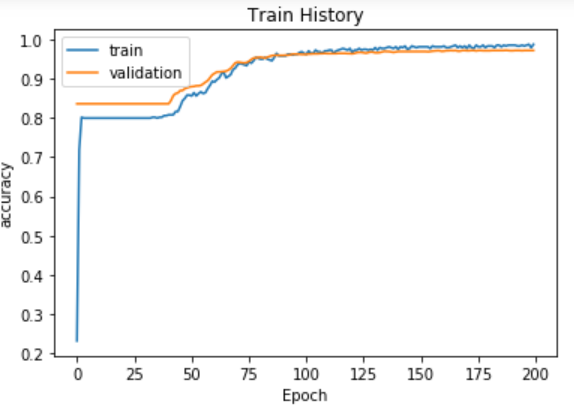 Figure - graph between the accuracy against the validation accuracy 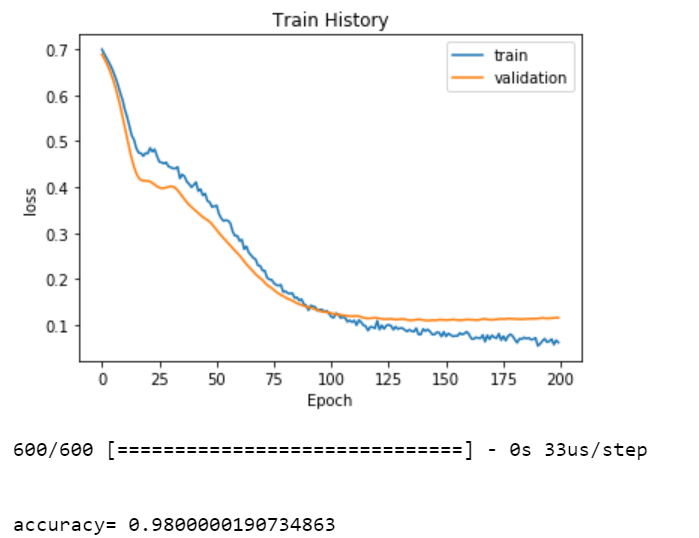 Figure - The graph between “loss” and the “validation loss” along with the accuracy.