Due to this, few people are always on the look out for garbage electronics and computers as these are practically, gold mines. You can extract the gold and make a good profit specially when you have a large amount of electronic components.

In 2020, over 1500 tonnes of Gold has been used in Electrical equipment including computers. When done in large scale with latest metal extraction equipments, there is a good profit margin in extracting and selling gold from Old Computers. 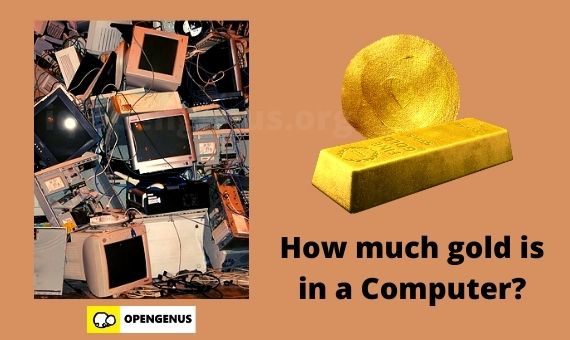 In brief, a Computer has around 0.310 gram of Gold which is worth around $20. Gold is present in Microprocessor, Wire tip coating and other components in a Computer. Extracting gold for several computers together is cost productive.

Use of Gold in Electronics and Computer

Gold is an expensive metal and is stored by common people as an asset. In financial market, gold has proved to be a good and safe investment in the long run with constant growth.

Gold is a very good conductor of electricity and hence, it is used in electronics frequently in a wide range of ways. In Electronics, Gold is used in:

Despite the wide application of Gold, the use is limited because of its cost. In commercial products, most applications of gold are replaced by other alternatives but still some amount of gold is used in every electronics for good performance and reliability.

In Commercial Computers, Gold is mainly used as an electroplated coating on connectors and contacts.

Gold is used as an because of:

Only copper and silver has better electrical conductivity but lacks in wear and corrosion resistance. Hence, if gold is replaced in Computers, then the cost will go down further but the performance and durability will go down greatly.

Amount and Cost of Gold in Computers

Following components in a Computer have Gold which can be recycled:

Following is the image of Gold plated connector pins and D plug which are essential components of a Computer:

Smelters are used to extract Gold and other metals from computers.

Circuits in modern CPUs and Laptops weigh around 100 gm so you can expect to extract 0.150 grams of Gold. Additionally, the wires and connector pins have gold which will amount to another 0.070 gram and another 0.090 grams for gold plated contacts.

So, on average, a Computer along with its accessories will have 0.310 grams of Gold.

On older Computers from 1990s and Computers designed for Military purposes, the Gold content is highest ranging upto 1.000 gram. This is the reason why the demand of recycling old computers is high.

There are two rules:

You can take the computer to a metal extraction company and extract the gold and other precious metals for it and potentially, sell it to make a profit.

If you want an easier route, then sell it to a garbage collector for a reasonable rate. You know how much gold is in the computer and hence, you can easily calculate the amount of profit you are leaving on the table.

A computer is an asset. You know it now with this article at OpenGenus.