This article serves as an introduction to Blockchain technology, specifically the Bitcoin Blockchain.

Unlike banks or other traditional forms of record-keeping where we have accounts and balances, cryptocurrency(Bitcoin) holders only have wallets with addresses that serve as interfaces to the blockchain. Also instead of combining transactions into a single sum, bitcoin stores all transactions as individual transactions. Just like a wallet storing individual notes and coins that sum up to a number.

For example, the following is an example of a Bitcoin wallet. 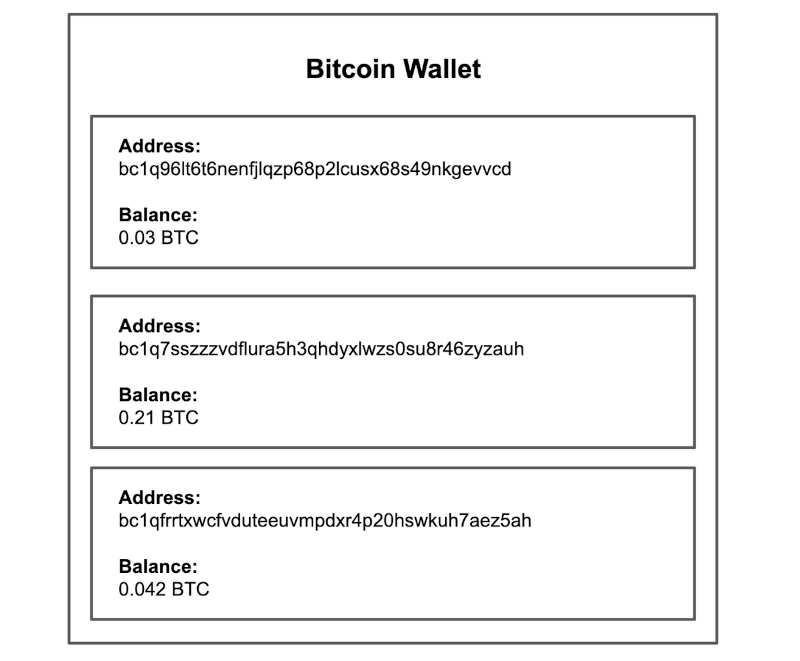 Bitcoin and other blockchain protocols store transactions performed on the network and user balances in the form of UTXOs. These are lists of unspent bitcoins sent to a user but not sent from him/her.
On the bitcoin blockchain, transactions appear as a collection of bitcoins on different addresses, a user uses a wallet to be able to access the bitcoins. A transaction is said to be valid if a user can prove ownership of the Bitcoins using keys stored in a digital wallet.
This makes it easy to track a bitcoin since it is signed from one party to another.

On the other hand, the Ethereum blockchain stores information about a user, and account balances are subtracted and added to give balances in accounts as a single transaction. This although efficient, makes it hard to track transactions. In other words, we can track every transaction whether it be a sender sending money to a recipient or the recipient combining the wallet balances to form a single balance on the Bitcoin blockchain. On Ethereum, a transaction is said to be valid if a user proves ownership of the account and the balance is enough to perform a transaction.

A UTXO(Unspent Transaction Output) is a piece of Bitcoin that can be combined and split to make bitcoin payments in all denominations just like a note being split into coins to make payments. They are just like physical currency but there are not standardized, meaning one can have any amount of bitcoin i.e we can have 0.005 Bitcoin but not $0.005.

A UTXO is both the input and output of a bitcoin transaction. An output exists as a UTXO until it is spent as input in a subsequent transaction.
A UTXO set set is the set of all existing UTXOs at a specific time.
Participant nodes in the network are responsible for storing all UTXOs in a distributed decentralized database/ledger.

Structure of a UTXO

A Transaction will include:

How UTXOs are Created.

The UTXO model enables bitcoin to be more transparent, auditable, and better than centralized financial systems that rely on bank balances, and other third parties. It is a digital cash economy.

Let's compare the account model for bank institutions and the UTXO model in Bitcoin. If Bob has 2 BTC and sends Alice 1 BTC. Now Alice has 1 BTC from Bob and Bob has 1 BTC remaining. The bitcoin blockchain notes that Bob signed over 1 BTC to Alice. Now the difference comes. Assuming Alice had 2 BTC, now she has 3 BTC, another transaction is needed to convert her 2 BTC into 3 BTC by adding the 1 BTC sent from Bob. Similar to how converting two $1 notes to a single $2 note requires a transaction.

On the other hand on the Etherium blockchain, Alice would automatically have 3 ETH once Bob sends her 1 ETH. The blockchain would note that Alice's balance has increased and Bob's balance has decreased. In this case, no extra transaction is needed to combine Alice's account sum.

This is one of the reasons among others Bitcoin uses more computing power(electricity) for mining compared to Ethereum. Also why it is more valuable, if all transactions are recorded, then it is difficult to cheat the system.

An example of a bitcoin transaction

The following is an example of a Bitcoin transaction found here

We break it down as follows;

Now, why do we have 3 inputs and 2 outputs? The reason is that the three input UTXOs are used(spent) to generate the two output UTXOs.

At the time of this writing the total amount of Bitcoin transacted summed up to $148, that is;

The transaction fee paid to the miner who validated this particular transaction was paid a fee of $55.

For more information, we can scroll down the page and decipher the information to know more about the inputs and outputs in a Bitcoin transaction.

Bitcoin started here, it was started when Satoshi initiated the first transaction with a reward of 50 BTC. It was started just as people had lost faith in the banking system 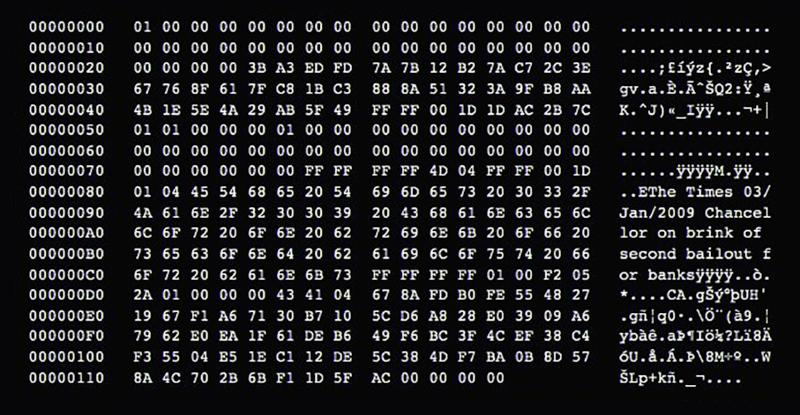 The system was designed in a way that if the wallet address is lost, then 50 BTC cannot be spent or used.

We can generate our genesis block and start a toy blockchain.

We can also try to change a block already in the chain. Notice how all other subsequent blocks become red. This means they are invalid, more mining has to be done to validate them. In the real thing, once this happens, it is a sign that someone has tried to change a transaction, in this case, others will invalidate the block and remove it from the chain until the transaction is rectified.

From the image in the previous section, we have the following 3 blocks, blocks, 1, 2, and 3. 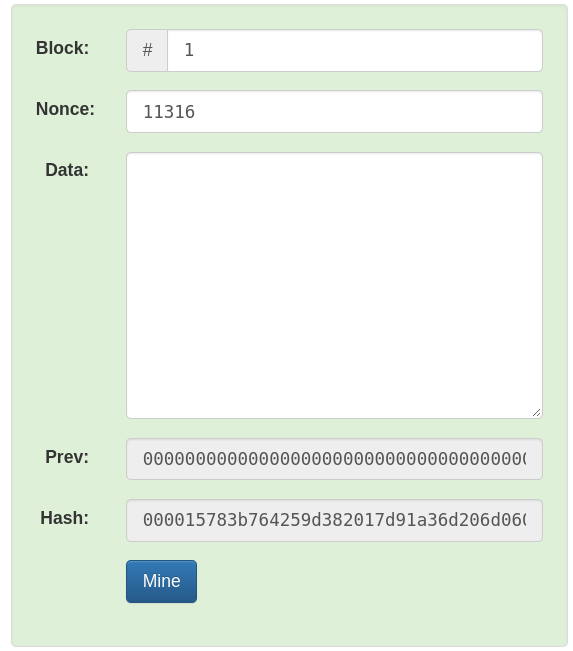 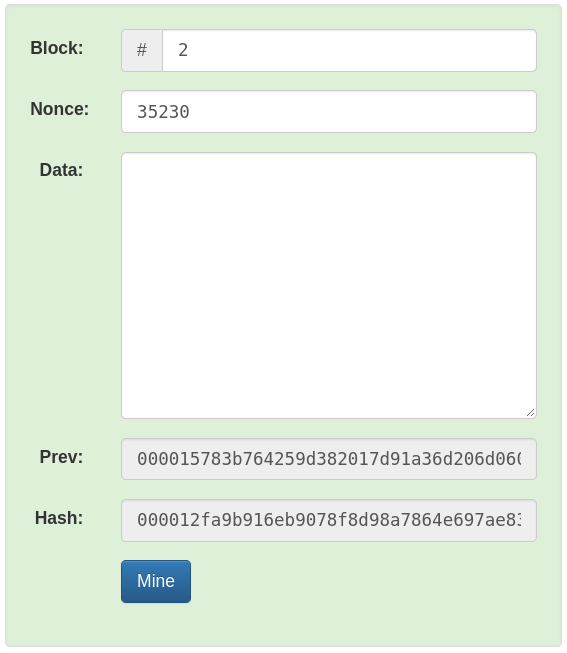 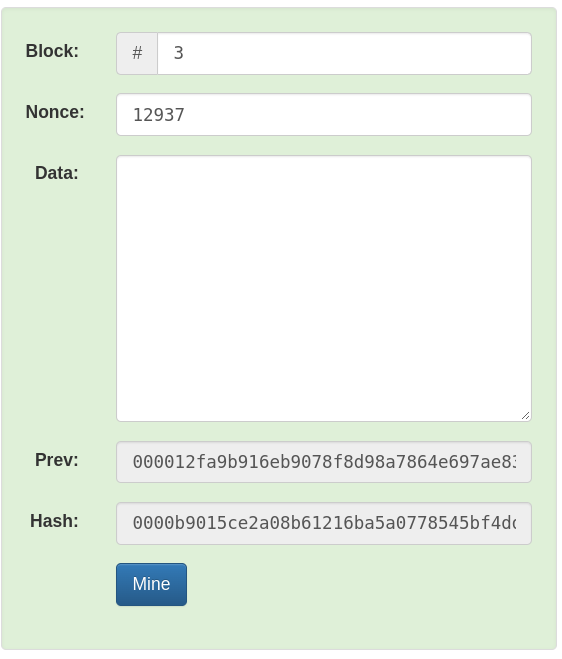 Advantages and Disadvantages of a Blockchain.

Transactions involve the transfer of value in the bitcoin blockchain, UTXOs specify the inputs and outputs of such transactions.
When a block has been verified by the miners, as we can see no block in the chain can tell its tale, all other blocks must come to a consensus to verify a block before it is added to the chain.
The UTXO model enables bitcoin to be more transparent, auditable, and better than centralized financial systems that rely on bank balances, and other third parties. It is a digital cash economy.
A genesis block is the first block to be mined at the beginning of a blockchain network.