In this article, we have explained the idea of L2 Cache (Level 2) in depth along with location, size and how to check L2 cache size and compared it with other standard caches like L1 and L3 cache.

What is L2 cache?

L2 cache stands for Level 2 cache in a computer system. It is the cache that is placed on the processor chip but outside the CPU core. It is the second fastest cache in a system and is also, the second smallest cache in terms of size. L2 cache is significantly larger (at least 4 times) than L1 cache.

L2 cache is rarely shared among CPU cores in modern mainstream systems. Though there exists niche systems where L2 cache is shared between two CPU cores.

L2 cache is made up of Static Random Access Memory (SRAM) which is an expensive but efficient memory storage and is an alternative to DRAM. All caches are made up of SRAM.

The main points about L2 cache are:

Where is L2 cache located?

L2 cache is placed in the same Microprocessor Chip. In early computers around 1980s, L2 cache was placed in the motherboard which was a performance bottleneck. 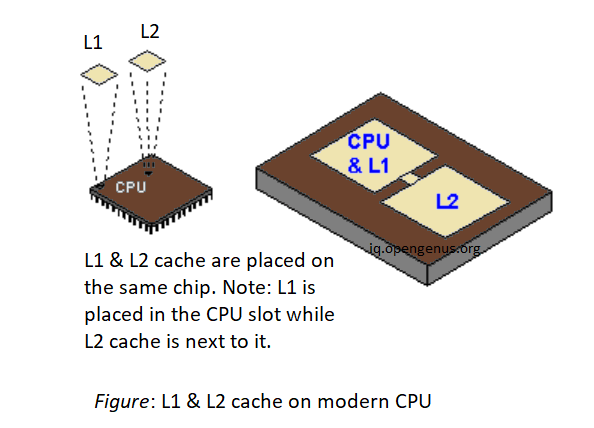 This is the case with modern computers.

In early computers, L2 cache was placed in the motherboard which is a separate component from the processor chip. The processor chip used to connect with the L2 cache while L2 cache was connected with the Main Memory (DRAM). The design of modern computer provide better performance as access time of L2 cache is significantly reduced by placing it on-chip.

Usually, the size of L2 cache range from 8KB to 512KB. Higher the L2 cache size, Higher is the System Performance in general.

To find the total L2 Cache available in your system, use the following command in terminal:

It will provide several information including the L2 cache size. A part of the output:

To know how L2 cache is organized in the system along with the placement of L1 and L3 cache, use the following commands:

This will give the complete Cache Infrastructure/ topology of the system. A part of the output will be like:

So, from the above information, we see that in this particular system, a single L2 cache of size 64KB is exclusive to one CPU core only.

So, there are two L2 cache size that can be reported:

The Differences between L2 and L1, L3 cache are:

With this article at OpenGenus, you must have a strong idea of L2 cache and how it compares to other standard cache in the system like L1 and L3 cache.

L2 cache is critical for the overall performance of system and there is constant improvement in L2 cache as Computing Devices mature.