In this article, we have explained Pumping Lemma for Regular Languages along with an intuitive proof and formal proof. This is an important result / theorem in Theory of Computation.

Let us get started with Pumping Lemma for Regular Languages (with proof).

The theorem of Pumping Lemma for Regular Languages is as follows:

Given a regular language L.
There exists an integer p (pumping length) >= 1 such that for every string STR in L with length of STR >= p can be written as STR = XYZ provided:

In simple terms, a string STR in L can be written in such a form that there are three components (xyz) and if we repeat the middle portion any number of times, the resultant string is also in L.

The name follows from the idea that the middle part of the string is pumped multiple times to form the resultant string.

If a string STR is long to create a cycle in Deterministic Finite Automata (DFA) for a given regular language L, then we can repeat the cycle (pump) any number of times and form infinite set of strings that will be a part of L as it is represented using the same DFA.

Let Σ be the alphabet of regular language L. There exists a DFA M = (Q, Σ, δ, q, F) that accepts L. We define p (pumping length) to be the number of states in Q.

Let a starting state be r1.

Therefore, if we take si as input at state ri, we move to state ri+1.

Number of states in DFA M is p and as n >= p, by pigeonhole principle, we know that there must be a state that repeats itself.

Therefore, there exist i and j such that ri = rj.

Therefore, reading characters in a string y will move from state ri to rj. Consider the following image to visual DFA M easily. 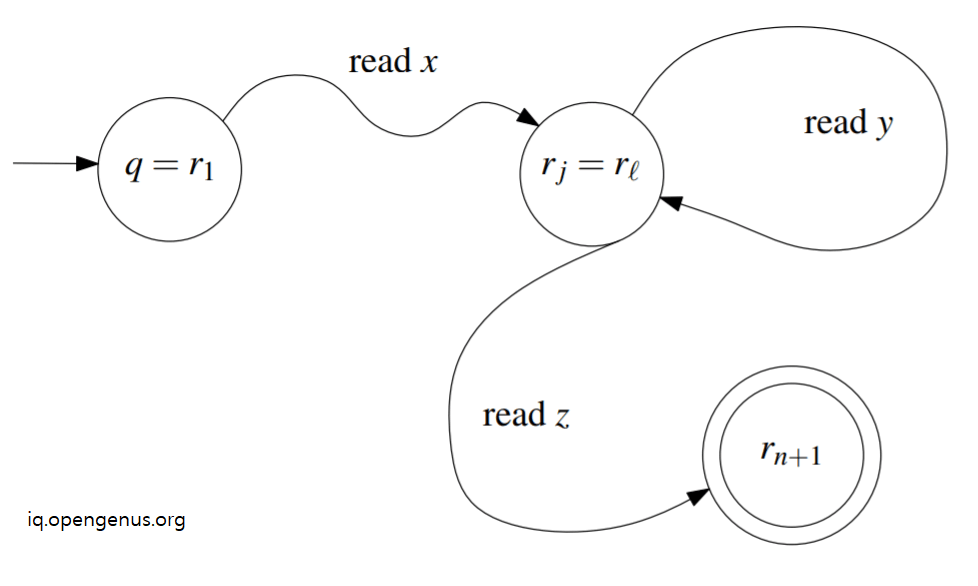 In this view, the string y can be pumped any number of times and the resultant string will stay in DFA M that is in regular language L.

With this article at OpenGenus, you must have the complete idea of Pumping Lemma for Regular Languages (with proof).