In this article, we learn about the three different types of blockchains that come as a result of categorization based on access limits.

Bitcoin code is open source, this means we can create a new form of digital currency just by modifying the original source code. Since its release in 2009, this code has been extended to release about 300 other different cryptocurrencies.

In addition to this bitcoin supports Scripts for conditional transfer of value. Bitcoin uses a scripting system for transactions. A script is a simple, stack-based programming language processed from left to right. It is turing-incomplete and has no loops. This is intentional to avoid infinite execution among other security issues.

A script is a list of instructions recorded with each transaction describing how the next person that wants to spend the transferred bitcoins can gain access to them. Ethereum has extended Bitcoin's scripting feature into a code execution framework referred to as smart contracts which we shall discuss in subsequent articles.

Code execution also raises issues such as blockchain access. This leads us to further categorize blockchains into three more categories based on access limits.

The different types of Blockchain are:

All four are implementations of a similar technology but in different ways based on access to the said blockchain.

Anyone can read/write or audit the blockchain, this gives bitcoin a self-governing nature that cannot be corrupted by a single centralized entity. The network is run by the people. Bitcoin operates on incentives. This is whereby miners are rewarded for taking on additional responsibilities(mining, validating transactions, validating blocks, etc) to maintain the network. This means more people are able to join and this makes the network better and better in all aspects such as immutability, security, and decentralization, just to mention a few.

Pros involved with public blockchain are;

Some cons involved with public blockchains include;

Examples of public blockchains include Bitcoin, Etherium, and Cardano among others.

Here access is only limited to a few blockchain participants within a particular organization. This means simpler block creation, transaction processing, validation, and consensus due to the small size of the network.
These are mainly used by large organizations who want to only allow a select few access to the blockchain. Additional participants join the network only after verification by an overseer of the blockchain.

A single entity in a private blockchain decides the consensus protocol, verifies miners, and sets rewards for mining blocks, he/she can also manage participants by adding or deleting them from the chain. This entity also performs network activities such as creating, reading, updating, and deleting entries in the private ledger.

Some pros of private blockchains include;

Cons of private blockchains include;

Examples of private blockchains include, Morpheus Network, Patientory, and Corda among others.

These types of blockchains are also referred to as consortium blockchains. They are meant for collaborating parties so they can be able to transact on the blockchain.
This results in easier governance and accountability. For example a consortium of health care, startup funding, and government.
This type of blockchain carries all permissions of the public blockchain for users with permission to collaborate and transact.
These blockchains are built so they can grant special permissions to their participants. They are mostly preferred for businesses since they allow the business to restrict participants while configuring and controlling the activities of its users.

Some pros of permissioned blockchains include;

Examples of permissioned blockchains include, the energy web chain, ripple, among others.

This is a blockchain that uses the best parts of public and private blockchains. That is, it offers freedom and controlled access at the same time.
These blockchains are not public meaning not everyone can participate in them but offer some of the features of public blockchains such as transparency, security, and integrity.

Some pros of hybrid blockchains include;

An example of a hybrid blockchain is the IBM food trust.

The following image summarizes the different types of blockchains; 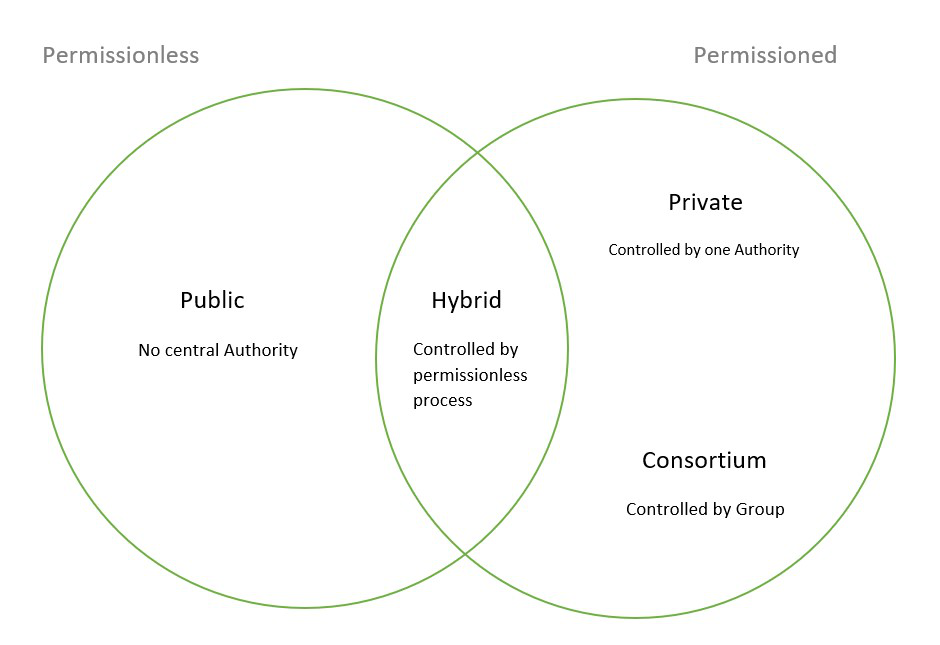 A permissioned blockchain has aspects of both public and private blockchains. They have the capability of allocating specific permissions to specific users on the network.

Private and permissioned blockchains are implemented since they allow for controlled access to the blockchain. This results in many diverse business models built on top of a blockchain.