In this article, we learn about coinbase transactions, data, rewards, fees, and how transactions are aggregated into the Bitcoin blockchain.

In the prerequisite article "Bitcoin Transaction Pool", we learned about transaction pools, we know that once transactions have been validated, the bitcoin node adds them into a mempool/transaction pool where they wait to be included in a block. A full node collects, validates, and relays new transactions and finally aggregates the transaction into a candidate block.

The node maintains a local copy of the entire blockchain and listens for new transactions, trying to mine them and at the same time listening for blocks discovered by other nodes. During the time when the node was looking for a solution to a block, it also collected transactions in preparation for the next block. Once the block is received and validated, it compares it against transactions in the memory pool and removes transactions that were included in the previous block. The remaining unconfirmed transactions wait to be reordered in a new block.

A candidate block is a temporary block created using transactions selected from the memory pool. Nodes select transactions from their memory pool to form a candidate block. This block is not yet validated since it does not have a valid PoW(Proof of Work). It is only valid if the miner successfully solves the cryptographic puzzle specified by bitcoin.

The following image demonstrates the above explanation; 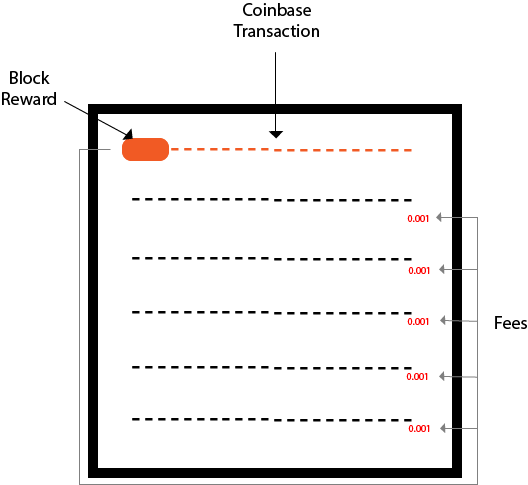 This transaction does not spend any UTXOs instead has a single input referred to as the coinbase that creates bitcoins from nothing. This is the way new coins are added into circulation.

Structure of the coinbase transaction

It is obvious that a coinbase transaction will not be similar to normal transactions.

The coinbase data is used to replace an unlocking script.

In order to come up with the coinbase transaction, a full node will first calculate the total amount of transaction fees by adding all inputs and outputs of all transactions in a block.
Total fees = Sum(inputs) - Sum(outputs)

The next step involves calculating the correct reward for the new block. This is calculated based on the block height that starts from 50 bitcoin(reward for the genesis block - 2009) and is reduced by half after every 210000 blocks. At the time of this writing, the reward is 6.25 bitcoins.

The coinbase reward is then added to the transaction fees and the sum is returned. To prevent miners from rewarding themselves more coins, a block with an incorrect reward is considered invalid by all other nodes rendering the miner's PoW invalid. This means that the miner wasted time, electricity, and computational power since the node is invalid. In general, a miner can only spend a reward that has been accepted by every node in the bitcoin blockchain.

This data field can have arbitrary data except for the first few bytes. For example, in the genesis block, the coinbase data included the text "The Times 03/Jan/2009 Chancellor on brink of second bailout for banks". It marked the date and conveyed a message. Miners use the extra data fields to include nonce values and strings that identify the mining pool.

BIP-34 demands that the first few bytes be used for the block height index as a script push operation.

The above data is just a snapshot of the whole thing, we can obtain it by executing the following command;

We decode it as follows;
*C 03 instructs the script execution engine to push the next three bytes onto the script stack.

A candidate block is a temporary block created using transactions selected from the memory pool.

Example of Coinbase Transaction on block 740188