Let us get started with Deterministic Finite Automaton (DFA).

Other useful definitions related to DFA:

DFA has resulted in the discovery of Knuth Morris Pratt Algorithm in 1976 which is a very popular string searching algorithm today.

The above table is known as "State Transition Table".

Following is the state diagram of our DFA: 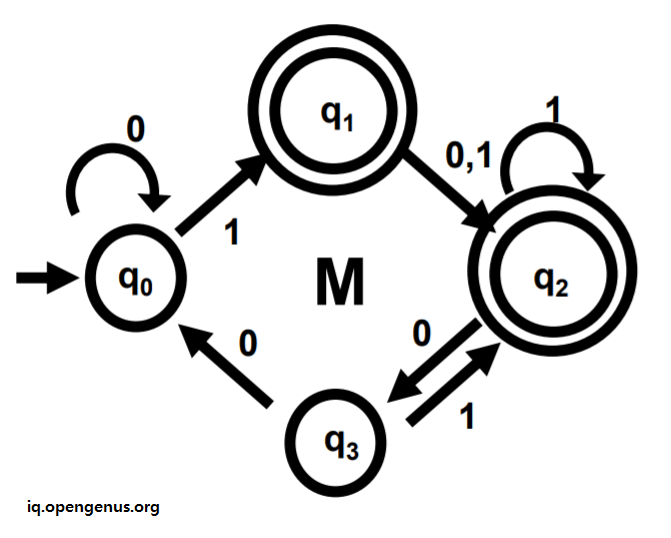 Properties of DFA are:

This summarize the properties of Deterministic Finite Automaton.

DFA Membership Problem is the problem to determine if a given word belongs to a Language L which is generated using DFA M.

DFA Membership Problem can be solved in Linear Time O(N).

There are other similar problems which can be solved using a DFA:

As there are algorithms to solve all these problems in linear time O(N) for DFA, this makes DFA is very useful model in Theory of Computation.

How to prove a Language is not Regular?

Steps to prove a Language is not Regular (using DFA):

Therefore, in these lines, you can prove that the given Language L is not Regular Language using DFA.

There exists an algorithm to minimize the number of states in a given DFA.

The steps of Minimization algorithm for DFA are as follows:

The major difference between DFA and NFA is:

With this article at OpenGenus, you must have a strong idea of Deterministic Finite Automata (DFA) in Theory of Computation.