In this article, we learn about the structure of Ethereum accounts, transactions, and blocks.

The bitcoin blockchain state was defined in terms of UTXOs - (Unspent Transaction Output) which we have discussed in this article. 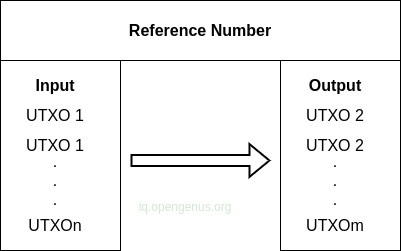 Ethereum on the other hand introduced the concepts of accounts 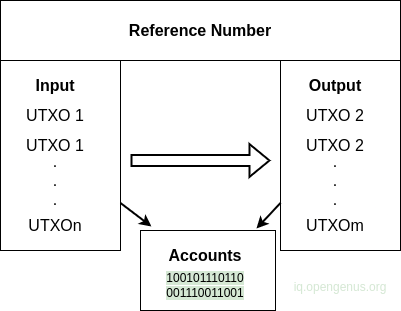 Accounts on the Eth Block.

Every account has a coin balance, and accounts can transfer value between themselves or invoke a specified smart contract code. For all these transactions, transferring value or code execution requires fees. This means that an account must have a specified minimum balance to execute code or be able to transfer value to other involved parties.
Fees on the Ethereum blockchain are paid in Wei.
Wei is a lower denomination of the Eth coin, that is, Wei is to the Eth, what cents is to a fiat currency note what.
We can also say that Wei is to Ethereum what satoshis is to Bitcoin, a lower denomination of the cryptocurrency.
That is;
1 Ether = 10 ^ 18 Wei
1 Wei = 0.000000000000000001 Ether.

Externally owned accounts.
These accounts are controlled by private keys.
Such accounts are mandatory for participation in the Ethereum blockchain as they are the ones used to interact with the blockchain through transactions.

Contract accounts.
These represent a smart contract.
These are controlled by solidity code and can only be activated by an externally owned account.

Every account has a coin balance. Participant nodes can send transactions for two reasons, the first involves the transfer of value in ether, and the second is to invoke smart contract code. The accounts can also do both of the above actions, send ether and execute code.
In either case, fees are required meaning that the account must have sufficient fees for a transaction or code to execute on the Ethereum blockchain.

Breaking down an Ethereum Transaction
We will be analyzing an Ethereum transaction that can be found here on the Ethereum blockchain.
We arrive at the above link by navigating to this link and pasting the transaction hash 0xd88b07ee5c3e53c113cb9f8a930a7d4f98dc108838fc468dfdf6774402f5e466. We can also opt to choose a random transaction and analyze it to get a better understanding of eth transactions; 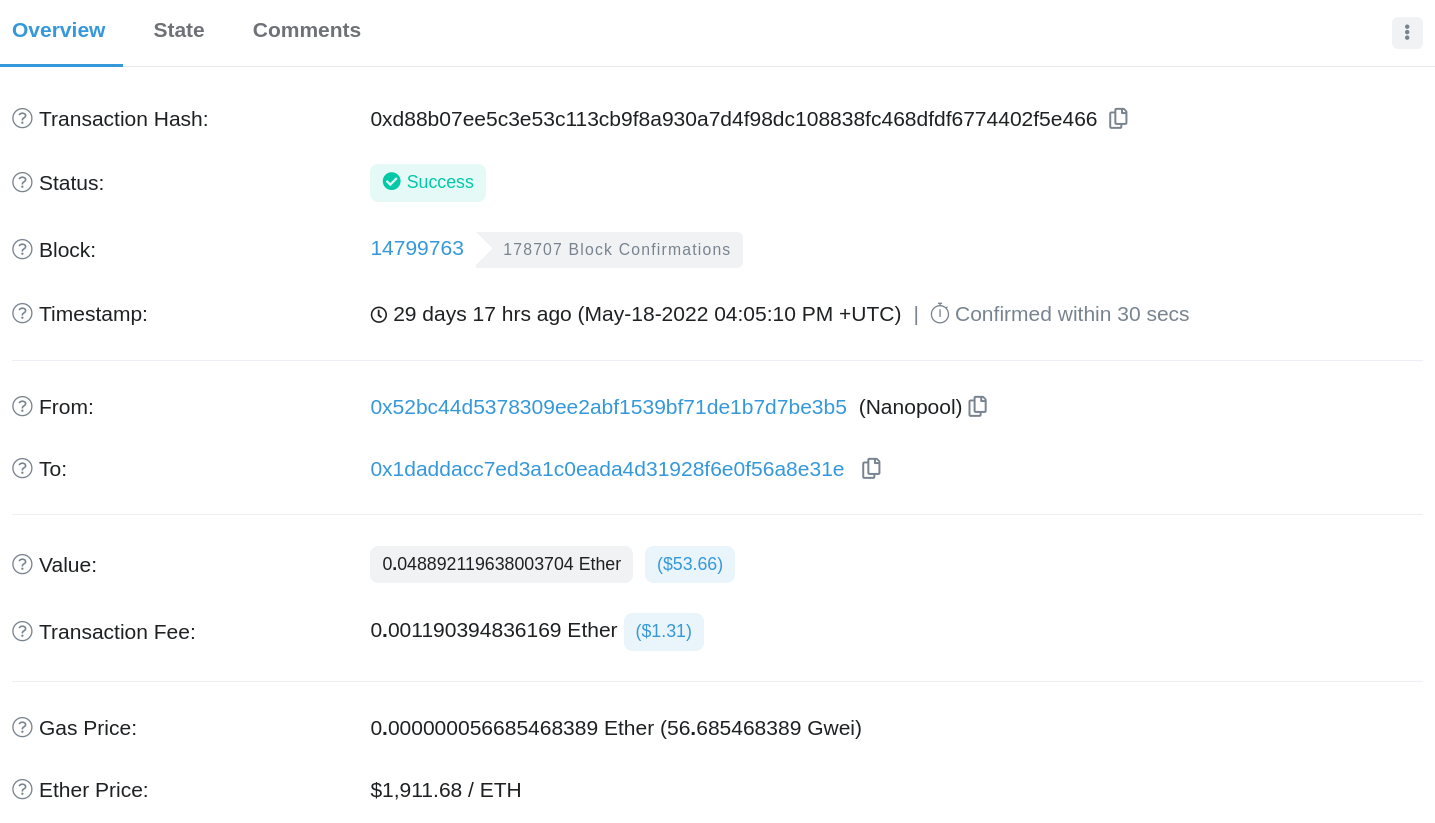 From the transaction we have the following fields;

Such a transaction usually invokes a smart contract whose execution requires a certain amount of fees - gas.

If you clicked on the block link, to feed your curiosity, let's proceed.
The Ethereum block comprises of; 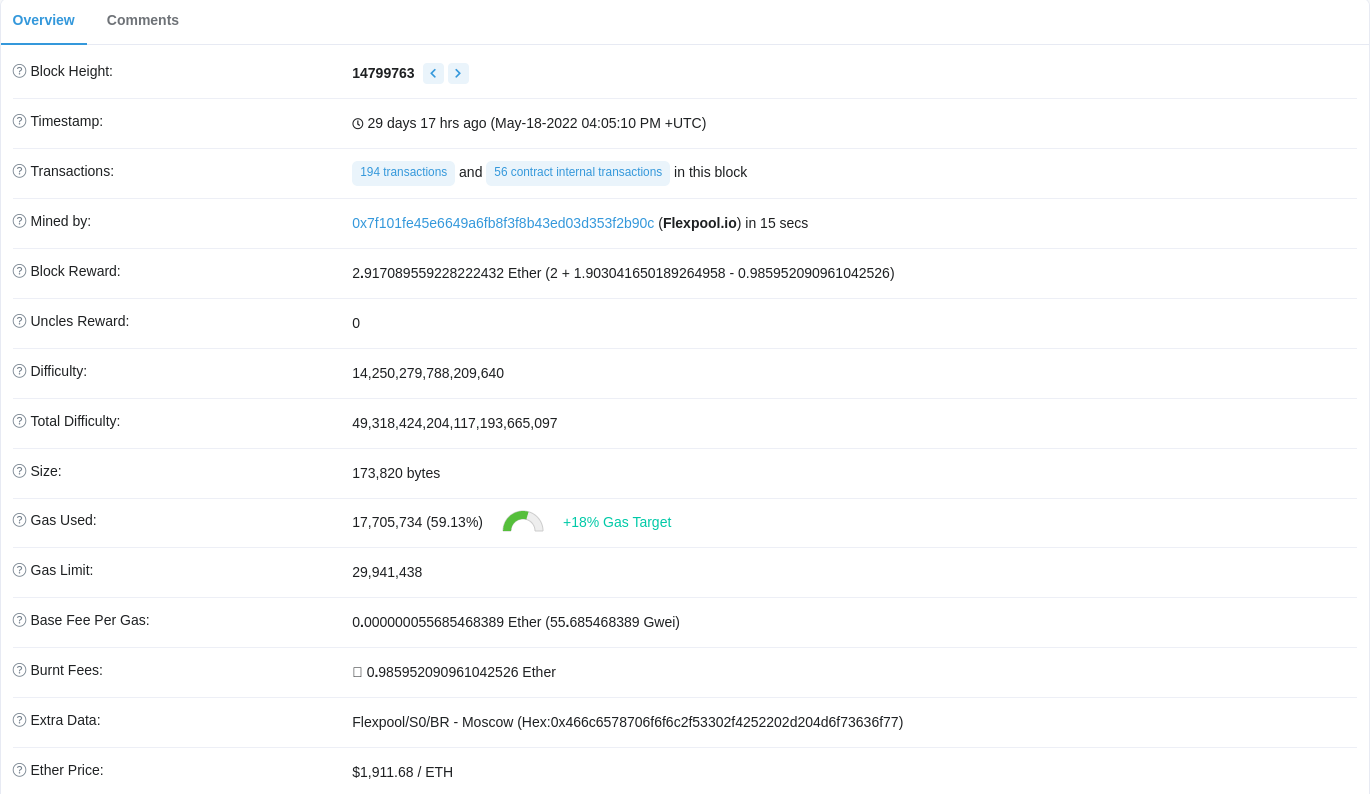 Above we have the following important fields:

Accounts are the basic units of the Ethereum protocol. On the Ethereum blockchain, we have two types of accounts, externally owned accounts, and smart contract accounts.
An Ethereum transaction includes not only the transfer of value but also a message that invokes a smart contract. They are invoked by accounts.
An Ethereum block similar to a bitcoin block holds a reference to its predecessor block hash and much more information such as gas fees, the state of the smart contract, and runner-up headers.
The Wei is the smallest denomination of Ethereum.