In this article, we will learn what are set bits and how to count them. And we will also learn about Brian Kernighan's algorithm a famous algorithm to find the number of set bits in a number.

Brian Kernighan's algorithm is used to calculate the number of set bits in a given number. But what is a set bit?

For example, let's take the number 34

Well, we can count the number of set bits manually, but how to make the computer do this for us?

Here, we will discuss two ways to find the number of set bits in a number.

In this method, we just loop through each bit of the number and check if it is a set bit i.e. 1.

Let's break down to see what's happening in these lines of code. This function takes a number n as the input. And initializes a variable cnt as 0. Then the while loop starts operating if the number is not 0.

The next line performs a bitwise and operation on the least significant bit (the rightmost bit) with the number 1. And we know that the & operation returns 1 only if both of the bits are one. Thus, here if the LSB is 1 it returns 1 else it returns 0. As a result, the variable cnt gets increased by 1 every time the LSB is 1.

In the next line, the value of n is changed to n >> 1. It means the least significant bit (LSB) is deleted since we have already checked that bit in the previous line. Doing so in each iteration all the bits of the number will be deleted and finally, the number becomes zero and thus the loop ends.

And at last, we get what we wanted, the number of set bits in the given number.

The main idea behind this algorithm is that when we subtract one from any number, it inverts all the bits after the rightmost set bit i.e. it turns 1 to 0 and 0 to 1.

For example, see the binary representation of these numbers. 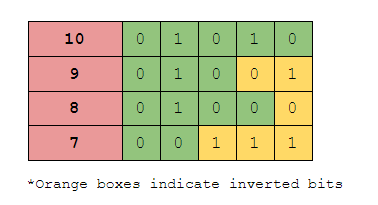 In the above image, we can see that how the bits are getting reversed each time we reduce the number by 1.

Note: The rightmost set bit also gets inverted along with the numbers right to it.

But how do we use this logic to find the number of set bits in a number? Let's understand it with the code.

This code is very similar to the brute force method, the only change in this method is the calculations that take place inside the while loop. Inside the while loop, the counter variable cnt is increased for each iteration, this is because of what happens in the next line. In the next line, the value of n is changed such that its rightmost set bit is reversed i.e. 1 is changed to 0.

So, if the rightmost set bits keep on getting reversed, the number eventually turns 0 and the loop ends.

Let's understand how this change happens, we know that when we subtract 1 from a number it inverts all the bits after the first set bit, and we also know that the bitwise and operation results in 1 only when both the inputs are 1.

Thus, when we perform bitwise and operation between n and n-1, all the bits after the rightmost set bit turns into zero.

I know it sounds a bit confusing, So let's see it with an example

In the above image, we can see how the transformation takes place and how the rightmost set bit gets unset.

This is what happens in each iteration of the loop. Eventually, all the set bits i.e. the 1's in the number becomes 0, and the loop ends and returns the number of set bits as the output.

But when we see the best case or average case scenario the time complexity of this algorithm is way faster compared to the brute force method.

The space complexity of the algorithm is O(1).

With this article at OpenGenus, you must have the complete idea of Brian Kernighan's Algorithm.

This is the list of Interview Questions based on Array Data Structure. You must practice these Multiple Choice Questions. This will help you master Array Coding Questions for Interviews at companies like Google and Microsoft.

This article discusses different algorithmic approach which we can use to find number of sub-strings with each character in it occurring even number times for a given string.