Bram made several softwares, all failed but only one became successful: VIM editor.
The top two Software that Bram insists that is better than available options but has failed to get attention/ audience are: a build tool aimed at replacing Make and a Programming Language to replace Python.

Moral of this story: You should also keeping exploring different ideas and one day, one of your ideas will become a hit for sure.

Bram is, primarily, known for:

Bram recieved the NLUUG Award in 2008 for his open-source contributions and development of VIM editor. 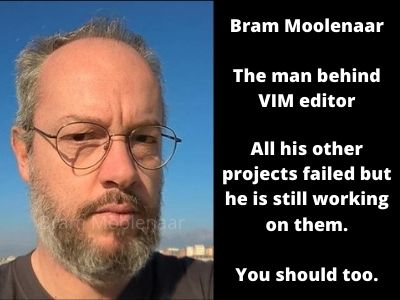 Bram Moolenaar has so many achievements but were does he work at? Does he work at Google, Facebook or Microsoft?

Where does the iconic Programmer, Bram Moolenaar work at?

The VIM editor was originally named as Vi IMitation in 1988 but it was later changed to Vi IMproved.

In 1992, it was released with UNIX operating systems officially and since then, it gained popularity among VI users and have won several awards being referred to as one of the most popular editors.

VIM editor is a Careware/ Charityware in the sense that it includes a message from Bram asking users to donate to International Child Care Fund Holland. This has been declared to be GPL compatible by Richard Stallman.

Bram Moolenaar build A-A-P in Python. A-A-P is a tool to build software just like Makefiles.

It is an improvement over Make and improves over some features of Make which Bram considered to be an issue.

One example is Make builds file based on the timestamp it was edited. Bram said it was not reliable so A-A-P uses the hash value of the file to detect changes.

CAcert is an organization that issues free public key certificates.

To create high trust, several people around the Global has been selected as assurers who verify such certificates. Bram Moolenaar is one of the assurers for CAcert.

Zimbu is a Programming Language created by Bram but it failed to make an impact just like A-A-P.

Bram says that there is no Programming Language that:

Zimbu claims to solve these issues and is better than C, C++, Java, Python and more.

Bram says Zimbu is an experimental programming language but it has failed to gather any attention or prove its potential.

The conclusion is "Do not be sad".

Even top Programmers like Bram work on projects that fail to bring a result. Even if the idea has potential and solves several problems, it is not assured that it will become a hit.

Bram's early project VIM became a hit but all projects after it failed. He is still working on his ideas. So, you should also keeping exploring different ideas and one day, one of your ideas will become a hit for sure.

A number that is equal to the sum of its digits each raised to the power equal to its digit is a Munchausen Number or perfect digit-to-digit invariant(PDDI).

Riku Kawasaki is a Competitive Programmer from Japan and is notable from reaching the World Rank 2 on CodeForces (as on March 2021) and being an Algorithmic Finalist at Topcoder Open 2019.