Grigori Perelman is a Russian Mathematician who who refused $1M and the equivalent of Nobel Prize (Fields Medal) for his proof to one of the most difficult problems in Mathematics.

Grigori is known for proving Poincare Conjecture and refusing all prizes because of the unethical nature of the Mathematical Community. 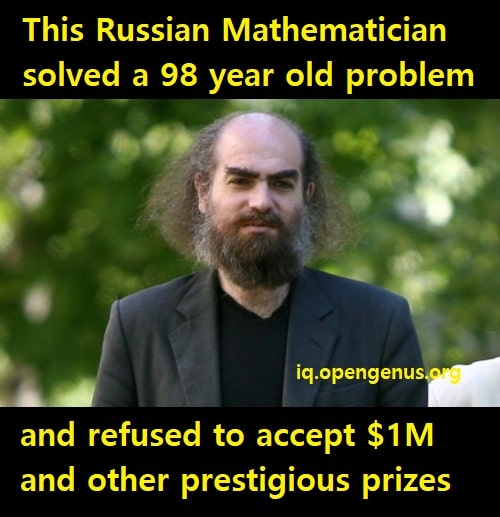 Grigori Perelman refused the prestigious and the first Clay Millennium Prize of $1 Million because he was not happy with the Mathematical Community and how it worked. There are several events that lead to his refusal.

Initially, before publishing the proof to Poincare Conjecture, Grigori received little to no recognition and even, Mathematicians refused to collaborate or discuss with him and other Mathematicians.

Grigori had said years before that he will solve the Poincare Conjecture but no one gave him any attention. Later, when he did publish a proof, the scientific community's first reaction was to claim that it was another wrong proof without taking any look.

This sadden Grigori that the community is not taking new ideas seriously.

Later, when it was determined that his proof is infact correct, things changed suddenly. He had job offers from several prestigious Universities, Mathematicians wanting to collaborate, invitations for talks and many more.

He was dosappointed for the evil efforts of the Fields medalist, Shing-Tung Yau to downplay Perelman's role in the proof and promote the work of Cao and Zhu towards solving the conjecture. Though the efforts failed, no one took any action.

Grigori said that the community should give half of his credit to Richard S. Hamilton who is the inventor of Ricci Flow as Ricci Flow was the foundation of the proof. Even Hamilton was not happy that Grigori used his tool to make such a ground-breaking discovery and he, himself, could not do it.

The community refused to give credit to Hamilton.

All these lead to Grigori's refusal to accept the Clay Millenium Prize and the Field's Medal.

Though he refused the prizes, he did a World Tour following his discovery and gave talks at several prestigious Universities like MIT. Following a few months of the Tour, he stopped making public appearances again.

Poincare Conjecture was solved for cases with 4 dimensions and more but the 3 dimensional case was not proved yet and was considered to be very complex. The timeline is as follows:

It took us 98 years from defining the problem to proving it completely.

Grigori Perelman is known for solving the Poincare Conjecture and refusing the awards but very few know that he has made other significant contributions in Mathematics as well.

Some examples of his other works are:

Following this, he avoids public interactions so little is known about his current work. It is said he is working on Navier–Stokes existence and smoothness as he expressed interest in it along with Poincare Conjecture with his co-workers in 1990s.

OpenGenus IQ: Computing Expertise & Legacy
—
The man who refused $1M for his discovery (Why?) (Grigori Perelman)
Share this