Hans Peter Luhn was a computer scientist and a Textile engineer who is famously remembered as the inventor of Hash Map (a massively useful data structure) and has laid the foundations of text processing. He was in a time when computing system were being developed and initially, computers were seen to do simple lookups on numbers. He coined the term "business intelligence".

It was Luhn who extended computing systems for complicated text processing and opened up a new path for computing devices. He was associated with International Business Machine (IBM) as a researcher. 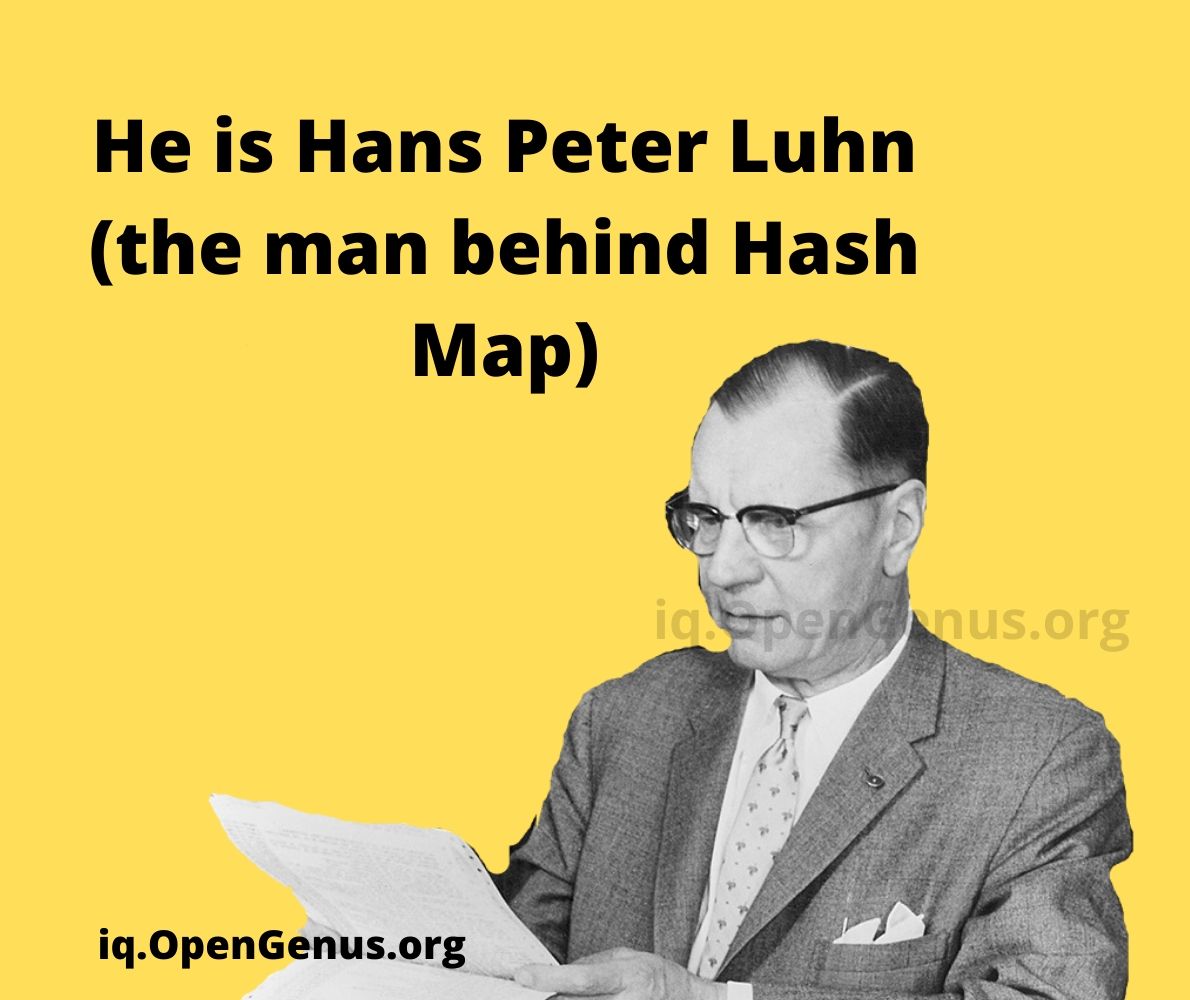 Luhn is a lost hero. His contributions are widely used today but are hardly associated with him. He has been awarded over 80 patents but he did not received any well known awards as compared to other scientists of his caliber.

Luhn was born in Germany in 1st July 1896. He performed a wide range of work in his lifetime and was least likely to be a Computer Scientist in his initial years. The major events in his life are as follows:

Everything started when IBM's clients James Perry and Malcolm Dyson asked for a solution to search for chemical compounds in coded form and this task was assigned to Hans Peter Luhn. This took place in 1947 and was about to change the computing landscape.

Working on the problem he was assigned, we developed an algorithm which he called "Key word in Context". It could take in a large amount of text (nearly 5000 words) and quickly generated an index of words which can then be used for searching within the text.

This was a ground breaking discovery at that time (1950) as the field of text processing was still unknown and computer scientists focused only on numbers instead of text. Luhn

By 1960, it was used by major computing systems like in Chemical Abstracts Service, Biological Abstracts and the Institute for Scientific Information.

Luhn's interest has been in text processing that is to handle large amounts of text and answer questions regarding them. This lead him to develop several ground breaking work in the field for IBM and over 70 patents.

Once he developed his Key word in Context (KWIC), he proposed the idea of mapping text to buckets to make the process of searching faster. He developed this as a way to quickly search phone numbers.

There are over a Billion phone numbers and comparing each one will take a lot of time. His idea was to keep the numbers in small buckets where each bucket may have a few thousand numbers. With this, if we are able to map the original number to the bucket it should exist, we can just search the numbers in the bucket which will be faster as it will have significantly less data.

Hence, this was a phone number was assigned a bucket number. Over the years, researchers have improved over this method and this is known as hashing today.

You must learn about Hash Map in depth.

Luhn's Algorithm is an algorithm to verify various numbers such as social security numbers, credit card numbers, IMEI (mobile device) numbers and others. It has been widely used by major companies like Taco Bells, McDonalds and others.

It is a checksum algorithm that detects most of the common errors like single digit errors, reversing two adjacent digits, twin errors (like 22 changed to 55) and others. It is not supposed to be security purpose but works well in general.

The algorithm is as follows:

This was one of the first algorithm of its kind and it truely great. Today, stronger algorithms exist in this field.

It is a set of tools like RSS feed, mailing lists, discussion forums, email notifications and much more and is a part of any online activity. It was during this work that Luhn coined the term "Business Intelligence".

Luhn was a pioneer of text information processing and a fundamental figure to basics of handling text information. It is fact a great fact how he moved from the textile industry to computing field and made huge contributions to both fields.

Residual neural networks or commonly known as ResNets are the type of neural network that applies identity mapping to solve the vanishing gradient problem and perform better than RNN and CNN.

Encoder Decoder RNN (Recurrent neural network) model is used in order to overcome all the limits faced by the NLP for text summarization such as getting a short and accurate summary.