A manager said Donald Knuth is too theoretical and he would not hire him to lead his team or as a programmer. Donald is widely respected for his theoretical contributions and have been recognized with awards. We will show that Donald is practically strong as a programmer as well. 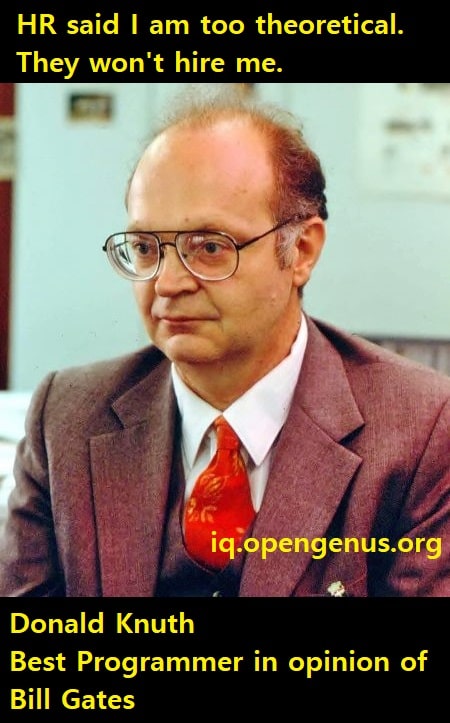 In general, it is thought that people who are too much theoretical cannot do practical work. This is a wrong idea as a theoretically accomplished person has enough experience and knowledge to make a practical impact.

Donald Knuth is a top notch programmer. Do you know LATEX?

It was created by Leslie Lamport, it is used by millions of scientists around the world to type their scientific articles and convey their ideas in Internet forums. LATEX is based on TEX, which was created by Donald Knuth.

Donald Knuth has already produced something with extreme practical impact.
Haters will say:

Many mention TeX as proof that Knuth could write real world code. But they don’t tell you that Knuth developed TeX as a side project when his day job was finishing Art of Computer Programming. This shows a lack of focus.

It does not matter when he did it. It proves that he can implement a solution for a problem he needs solved.

In short, Donald created the following:

Manager can be right

Then again, Donald Knuth has never been a programmer, and your manager needs a programmer. Knuth is a scientist, mathematician and highly skilled at teaching people. He’s also a successful writer and his books about programming are likely too complex for the average programmer. But that’s because Knuth goes deep into that theoretical stuff.

Knuth did develop TeX, though. He needed to, as he was writing books about programming and needed a better tool to provide better typesetting. So he designed his own. But he got support from Guy L. Steele Jr. who ported the TeX system to run on other systems using the SAIL programming language. But Knuth preferred to focus on Literate Programming. And on designing software and other stuff.

Thing is, Knuth knows a lot about programming and the theories behind it. But he lacks the work experience with programming. Knuth is like an architect who designs all kinds of buildings, from a simple shed to a huge Cathedral. But doing the actual building, which means mixing cement and picking up a hammer and nail… Nope, that’s a task for people with more practical experience…

People used to joke ruefully about Knuth volume 4 like they now joke about book 6 of Game of Thrones. It took Knuth close to 40 years to put out volume 4, and even then it was only volume 4A;

4B, 4C, and 4D are yet to come. He teased us with fascicles for years, much like George R. R. Martin gives us a sample chapter every now and then. But he keeps revising older stuff until it gleams and glistens instead of releasing new material (volume 1 is on its third edition!). This shows unrealistic standards.

An easily-distracted perfectionist. Yep, that’s what I want on my team 😁

If you thought Bill Gates was a good computer scientist, he said the following about Knuth's book "Art of Computer Programming":

"If you think you're a really good programmer... read Knuth's Art of Computer Programming... You should definitely send me a resume if you can read the whole thing."

Here, we have a validation from Bill Gates for Donald being a potentially good hire.

As a conclusion, Donald Knuth is a good programmer and has an exceptionally strong base in Algorithms and Analysis which will help in designing innovative solutions. Anyone working in the Industry knows that designing a good solution is the major step and it is likely Knuth is a master of it. He can definitely, handle programming or it can be handled by his Juniors.

Given an array of n positive integers, find the sum of the maximum sum decreasing subsequence (msds) of the given array such that the integers in the subsequence are sorted in decreasing order.

In this article, we have explored the algorithm to check if a Binary Tree is balanced by height or not.

OpenGenus IQ: Computing Expertise & Legacy
—
Will you hire Donald Knuth as a programmer?
Share this