Hash map is a widely used efficient data structure that used to store data which can be searched in constant time O(1). It is also referred as hash table, unordered map, dictionary, hash set and others. This data structure is implemented over an array that maps keys to values. Hence, hash map can be seen as a set of key value pairs. Each key is a number in the range of 0 to the array size – 1, generated by a hash function.

A good example for hash map is phone book. A phone book has names and phone numbers. In this case, the names are the keys, the phone numbers are the values. Imagine having a billion integers, using a search algorithm like linear search will take months while **hash map will take a second.

The idea behind hash map is simple yet very effective.

Note that in other data structures like linked list, accessing data at a particular index takes linear time O(N).

Idea 1: Use Array as a underlying data structure for Hash map

Idea 2: Use index of the array as the data

At this point, the problem is that we need to accept any data into a hash map such as strings, user defined objects and others and array accept indexes from 0 to N-1. For this, we need to convert any given data to our permissible range that is o to N-1. This process is known as hashing and will be performed by a function/ algorithm known as hash function.

Idea 3: Use array data as a pair of the index data

Since, we have stored data as the index, we have space for values. To utilize this, we will store data as pairs. In case, this pair is avoided, hash map is known as hash set.

There are four key components in a hash map:

A hash function is used to generate the index (hash code) of the key in the array. Ideally, each index a hash function generates should be unique, but in practice, it is extremely difficult.

The default hash function might not satisfy the programmer's needs. For example, in Java, a hash code is generated based on the object's address. If we need to compare other characteristics about two objects, like two people's name and age, we need to write a new hash function that generates hash code based on name and age. Note that when overriding the hash code function, we should always override the equal function too, because that is the method which checks is two objects are the same or not.

Here is the procedure of storing objects in the array using a hash function: 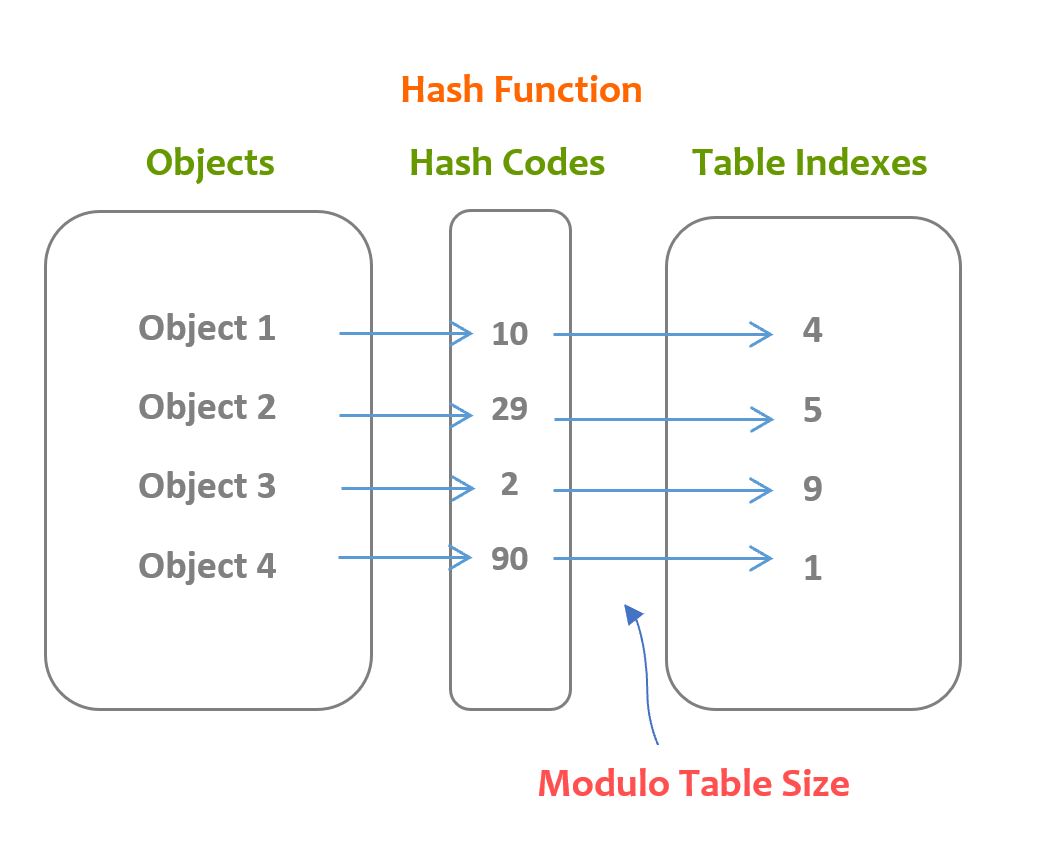 Here is a hash table example: 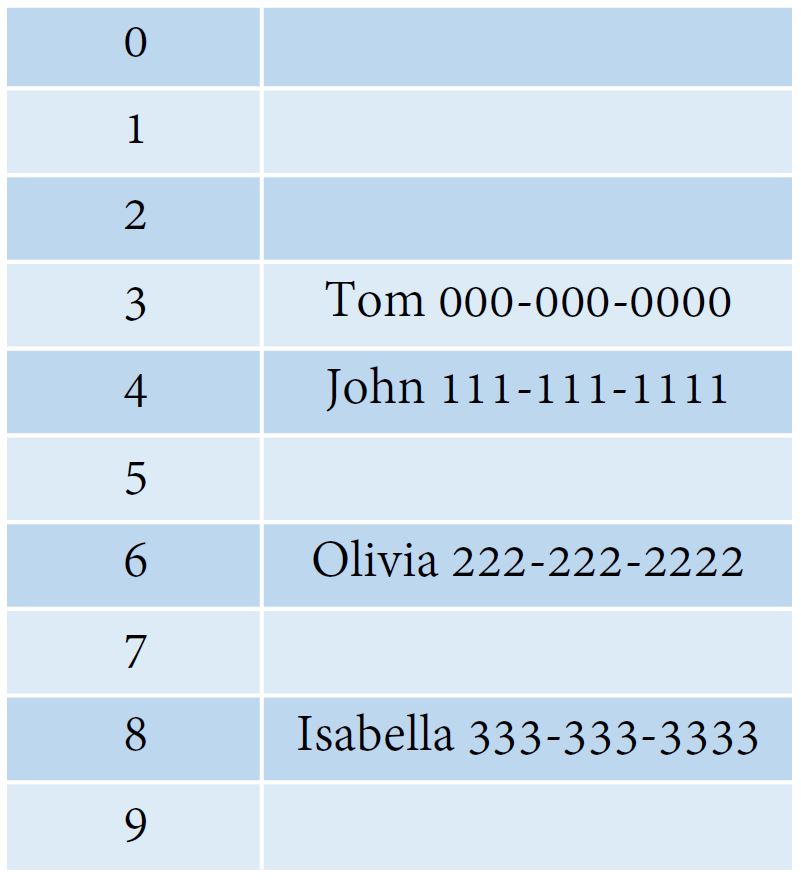 Here we use a hash function which generates indexes based on the name length. So, Tom will be in index 3, John will be in index 4. But if there was a Mia which also has a length of 3, a collision will happen. 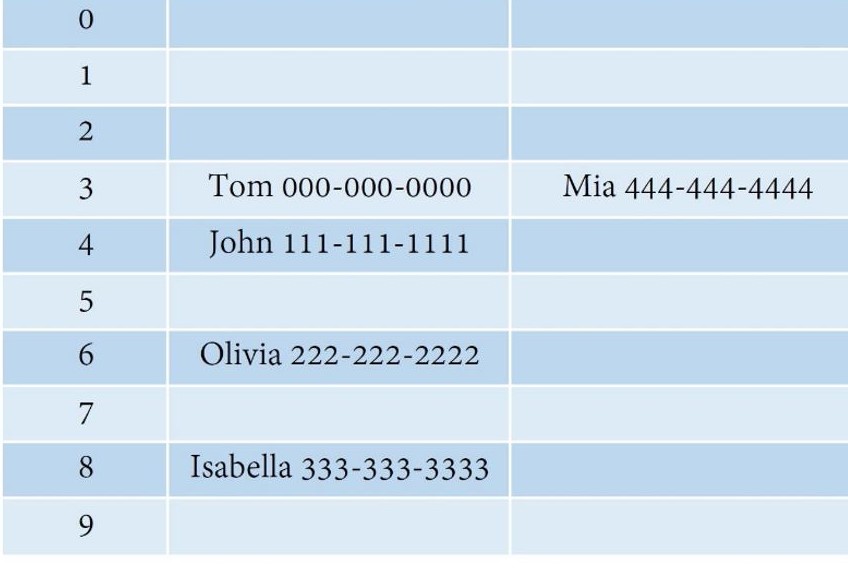 Collision happens when different objects in the hash map are mapped to the same location.

How it works: put all the objects which have the same hash code into a linked list (the hash map is then an array of lists).

To perform a search: we need to determine which list to traverse by using the hash function, and then search in that linked list.

To perform insert: depending on if duplicates are accepted or not, we check the target list to see if the element we want to insert already exists or not. We then insert the element at the front of the list because first, it is convenient; second, the recently inserted elements are more likely to be needed in the future.

How it works: when there is collision, this method looks for the next available space and insert the object there.

For example, instead of putting Mia and Tom in a linked list, linear probing finds the next space available to insert object Mia. 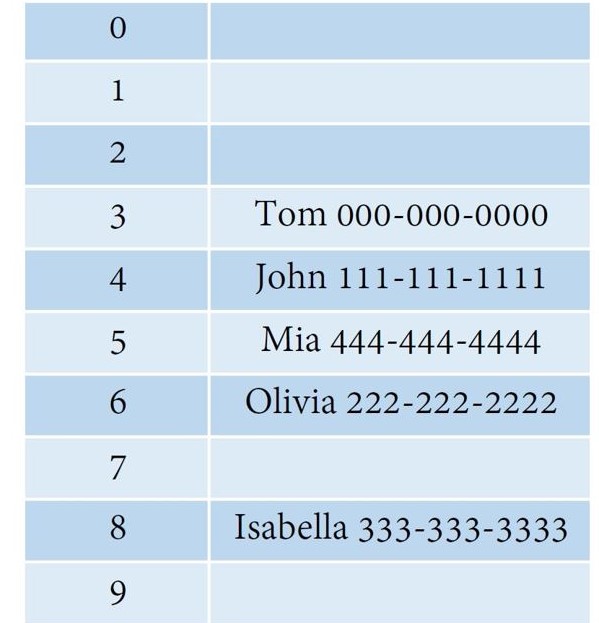 In this process, primary clustering, which means the slots after to the hash position are being filled up, can happen. For example, if the primary hash index is x, the probing will go x+1, x+2, x+3 and so on. This can reduce the performance.

How it works: it is a collision handling method that eliminates the primary clustering problem. Like what the name itself, this method uses a quadratic collision function. A common choice is f(i) = i^2, i stands for index. 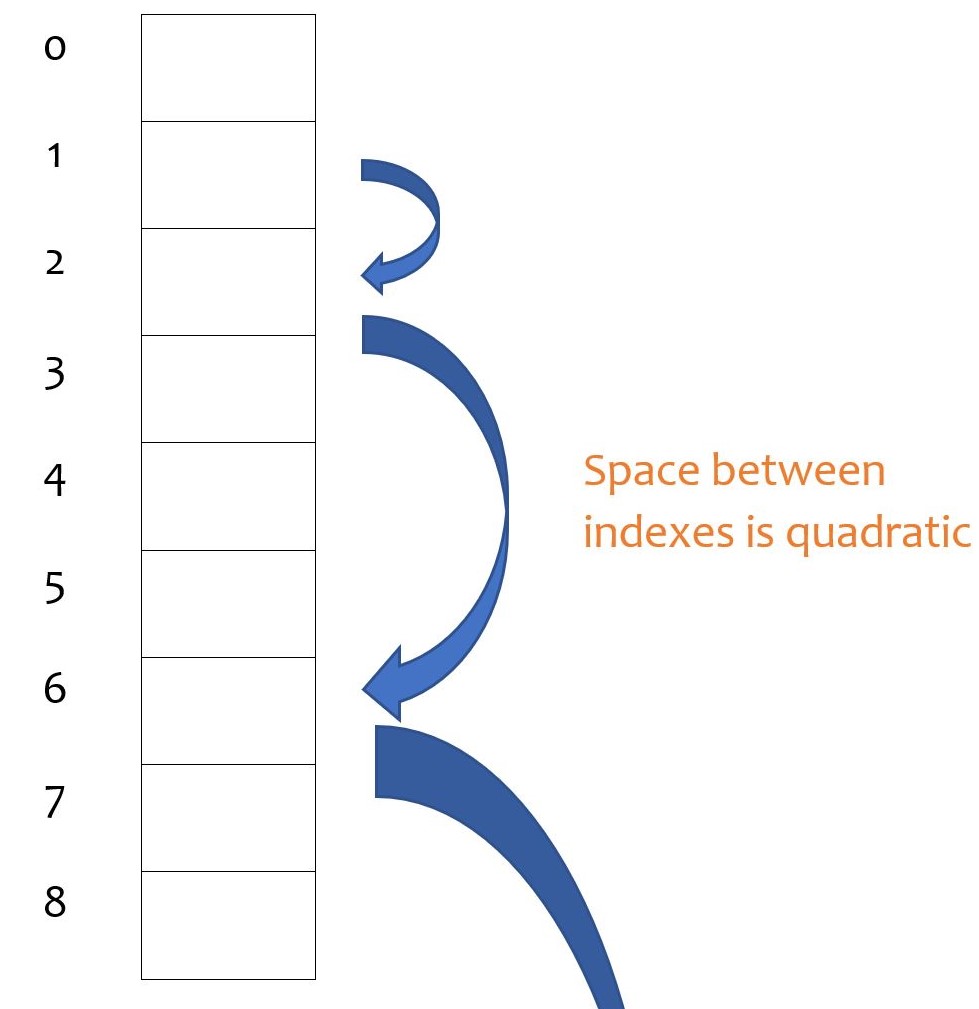 In this process, secondary clustering can happen. Just like primary clustering, the slots after the hash position can be filled up, but created by quadratic probing. For example, if the primary hash index is x, the probing will go x+2, x+4, x+9 and so on. Secondary clustering is less problematic for the performance.

How it works: when the hash map is more than 50% full, rehashing technique creates a new hash map which has the first prime that is roughly twice as large as the original map as its size, and then hash each object to the new map.Rehashing is an expensive operation because every object has to be moved around.

Hash code allows us to go to the desired index directly instead of iterating through the array. If the hash function is well-written, we only need to look at the linked list at that index. And there should be reasonable amount of objects in one linked list since the objects are evenly distributed in the array with a good hash function. So the average time complexity should be O(1).

However, if the hash function is poorly-written, in other words, objects are not evenly distributed, the linked list will be long and takes a long time to iterate. In this case, the time complexity is O(n). 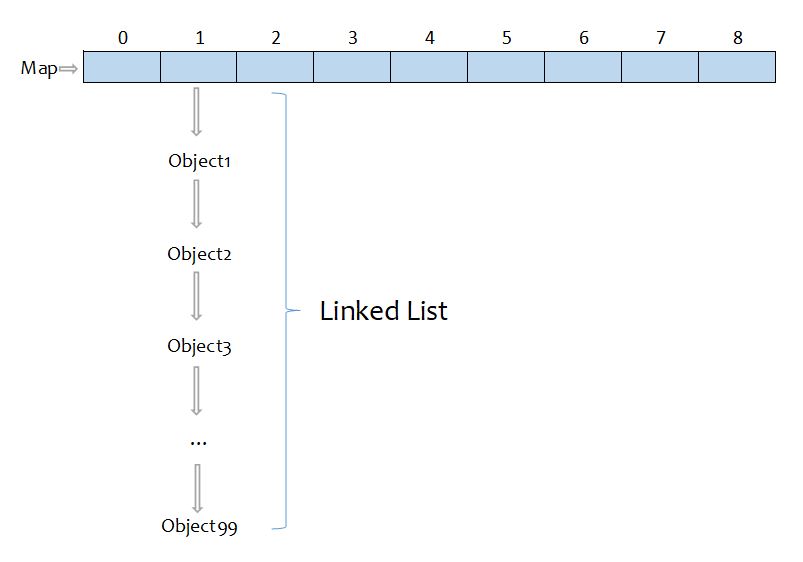 put(): put the key-value pair to the map

GET(): get data from a hash map

In C when some error occurs then -1 or NULL value is returned and a global variable errno is set with the error code.Hence we use returned values to check errors. We use EXIT_SUCCESS ,EXIT_FAILURE to deal with errors. There are three types of errors syntax, logical and semantic.