A for loop allows us to write a loop that is executed a specific number of times. The loop enables us to perform n number of steps together in one line.

In for loop, a loop variable is used to control the loop. First initialize this loop variable to some value, then check whether this variable is less than or greater than counter value. If statement is true, then loop body is executed and loop variable gets updated according to update expression. Steps are repeated till exit condition comes. 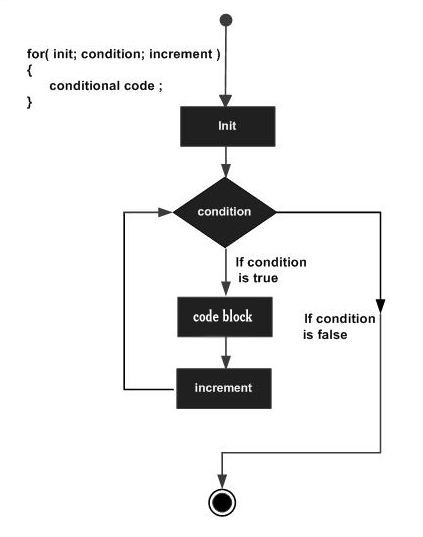 Here is stepwise flow of control in for loop −

The initialisation step is executed first, and only once. This step declare and initialize any loop control variables. You are not required to put a statement here, as long as a semicolon appears.

After the body of the for loop executes, the flow of control jumps back up to the increment statement. This statement can be left blank, as long as a semicolon appears after the condition.

The condition is now evaluated again. If it is true, the loop executes and the process repeats itself (body of loop, then increment step, and then again condition). After the condition becomes false, the for loop terminates.


write a program to print 'OpenGenus' 10 times using for loop.

A switch statement allows a variable to be tested for equality against a list of values. Each value is called a case, and the variable being switched on is checked for each case.if variable and case value are matched, then matched case will be executed.

A do-while loop is similar to a while loop, except the fact that it is guaranteed to execute at least one time. The do-while loop checks its condition at the bottom of the loop after one time execution of do.