Nature does not hurry yet everything is accomplished.

There is no better teacher than nature herself , she never rushes but everything is established. Have you ever wondered how our human brain is able to distinguish thousands of dog breeds from cats' even if we had never seen few of the breeds before too? How do ants find their way to the food? Let's learn about algorithms inspired from mother nature and know their applications in varied fields !

Optimisation algorithms are algorithms that tend to find the best solution possible for a problem. It can be classified into two types :- deterministic and stochastic. 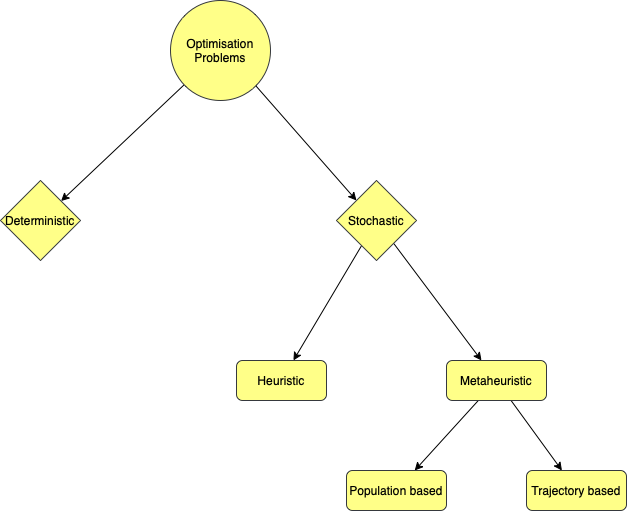 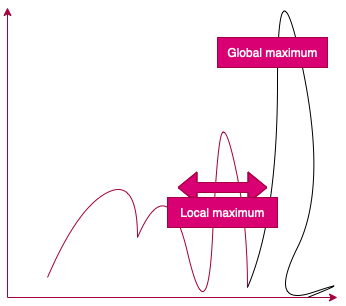 Objective function :
Function in the form f = ax+by to solve optimization problems in linear programming.An objective function attempts to maximize profits or minimize losses based on a set of constraints and the relationship between one or more decision variables.
Fitness function :
Fitness Function (also known as the Evaluation Function) evaluates how close a given solution is to the optimum solution of the desired problem.It is also a type of objective problem.

A set of rules are followed to reach the most optimised solution.Common programming methods like dynamic programing , linear and non-linear programming are few examples.Deterministic algorithms always give the same output for a given input and donot change from time to time.

There are two types of stochastic algorithms - Heuristic and Meta Heuristic

Population based approach -
An algorithm that maintains an entire set of candidate solutions, each solution corresponding to a unique point in the search space of the problem.
They use multiple agents to search for an optimal or near-optimal solution.In population-based optimization methods, proper control of exploration (global search) and exploitation (local search) is important in finding the optimum solution efficiently in search space.

Trajectory based approach -
A single agent or solution which moves through the design space or search space in a piecewise style. A better move or solution is always accepted, while a not-so-good move can be accepted with certain probability.The steps or moves trace a trajectory in the search space, with a non-zero probability that this trajectory can reach the global optimum.

Every object in Universe wants to achieve stability , a state of equilibrium.Universal entities have their own unique ways to achieve a state of stability, an optimal solution .

Nature inspired algorithms are a domain of metaheuristic algorithms that mimic natural phenomena by combining randomness and defined rules.

For Example , take travelling salesman problem with constraints like minimum cost by traversing each town atmost once . It cannot be solved in polynomial time using deterministic algorithms. In such cases , metaheurisitc algorithms especially nature inspired algorithms can give much needed
answers!

If the heating temperature is sufficiently high to ensure random state and the cooling process is slow enough to ensure thermal equilibrium, then the atoms will place themselves in a pattern that corresponds to the global energy minimum of a perfect crystal.

As we know every entity in the universe is seeking stability , to attain equilibrium. Simulated annealing takes the advantage of this property of universe which is prevalent field of thermodynamics.
Simulated annealing is an algorithm inspired from the heating-cooling process of metals. We know that in solids,particles are closely packed and which could have defects due to fracture or tightness.But when the solid is heated the atoms become active and randomly move due to the new found freedom as they have more energy.The metal molecules are then cooled down so that they reach a certain stability and settle. This method is used when we need to find global optima as most of the particles when they settle , they would do so at most optimum position.

It is a trajectory based algorithm.

During concerts you might have observed that when singers sing spontaneouosly they first sing few notes and see whether the notes are in harmony with music being played , if yes they continue to sing them continously , else they experiment with other notes to accordingly suit the music. This principle is applied in case of harmony search algorithm,where different candidates are experimented to see and generate the solution , if the solution is better than worst ones then it is updated , best amongst is chosen and observed whether is it reaching global optimum.It is a population based algorithm as we are using set of solutions and finding the global optimum.

The black hole algorithm can be applied to solve the clustering problem and can run on different benchmark datasets.

In rivers we can see flowing of water from one place to another through a path. The paths of water flow have been created by a collection of water drops. It’s also observed that the undertaken path by the rivers seems to be an optimal path in terms of distance travelled by the water.
One of the important properties of flowing water is its velocity. Water drops flowing from one place to another will carry some amount of soil along with it. The soil is usually transferred from fast parts of the path to slow parts of the river. The carried soils will be unloaded in the slower beds of the river.
The following properties are assumed for a flowing water drop in a river:

CRO algorithm has attracted the attention of machine learning and cognitive computation community over the past few years and has been successfully applied in several real- world optimization problems.CRO is inspired by the nature of chemical reactions . Usually chemical reactions occur to convert unstable compounds with excess energy to stable ones.This property is embedded in CRO to solve optimization problems, CRO has been used to solve a broad range of engineering problems, including the quadratic assignment problem, neural network training, multimodal continuous problems, etc.

Neural networks working can be best described as nature inspired models , which try to mimic brain's neurons to learn the features and further predict or classify .

Biology based algorithms can be classified into three categories

A population based metaheuristic biological inspired algorithm which is inturn inspired by biological mechanisms like reproduction , mutation , recombination and selection.

Types of EAs include :

These algorithms are inspired from commonly observed phenomenon in animals like flock of birds,schools of fish and so on.Particle Swarm Optimisation (PSO) simulates social behaviour of swarms such as birds flocking and fish schooling in nature.
One of the Bio inspired Algorithm -

Bacteria search for nutrients in a such a way that the energy obtained per unit time is maximised. Each bacterium communicates with others by sending signals.
Foraging means essentially hunting and gathering and flagella helps in foraging.
Bacteria is equipped with flagella - which helps it in locomotion. So the bacteria can either swim or tumble using this flagella while foraging.
BFO consists mainly of four behaviors: chemotaxis, swarming, reproduction, and elimination-dispersal.

Chemotaxis- The process, in which a bacterium moves by taking small steps while searching for nutrients, is called chemotaxis and key idea of BFOA is to replicate chemotactic movement of virtual bacteria in the problem search space.In areas with more food , bacteria tend to swim and in scarce places they tend to tumble .Why do they tumble? so that they can get more search space for potential food sources.

Swarming- Ability of bacteria to arrange in swarms/groups .

Reproduction - The bacteria that would be weak at finding food will be eliminated and the ones with strong abilities will split to produce an offspring .

Eliminate-dispersal - due to unexpected changes in environment , bacteria can face entire wipe out, if bacteria is arranged in swarms , isolated in group at a particular space.

It has already been applied to many real world problems and proved its effectiveness over many variants of GA(genetic algorithms) and PSO(particle swarm optimization).Future scope could possibly be in the fields of Mathematical modeling, adaptation, and modification of the algorithm.

Interested in time series databases and want to know a bit about them? Well, you are in the right place if that is what you want because in this article, I will give an overview of Time Series databases, examples of such databases, their applications as well as their advantages and disadvantages.

In this article, we will explore the concept of Gradient optimization and the different types of Gradient Optimizers present in Deep Learning such as Mini-batch Gradient Descent Optimizer.