During machine code generation phase in compiler design we translate variables in the intermediate language one-to-one into registers in the machine language.
A concern is that processors don't have an unlimited number of registers therefore we introduce the concept of register allocation for handing these situations.

More formally, register allocation is the mapping of a large number of variables into a limited number of registers.

This is done by sharing the limited number of registers among several variables and when the variables are too many some variables will be stored in memory temporarily, this is called spilling.

Register allocation during intermediate code generation has the advantage that the register allocator can be used for several target machines by parameterizing with the available set of registers.

However when intermediate code needs translation, we need extra registers for storage of temporary variables.

Two variables can only share a register if they are both dead, that is, there is no point in the program where they are both live.

Determining if a variable is live.

This is the process of determining if a variable is live and to do this we formalize rules as equations over sets of variables and solve the equations.
Instructions will have successors - instructions that follow the current instruction during execution.
We denote set of successors for i as succ[i].

For correct analysis we assume that the outcomes of an IF-THEN-ELSE instruction are possible.

If the above is not upheld this may result in the analysis claiming a variable is live when in fact it is dead which is worse because we may overwrite a value that could be used later and therefore a program may produce incorrect results.
Correct liveness information is dependent on knowing paths a program takes when executed which is not possible to compute with precision therefore we shall allow imprecise results as long as we err on the side of safety(calling a variable live unless we have proof it is dead).

Since the above equations are recursive we solve them using fixed-point iteration.
First we initialize all in[i] and out[i] to empty sets ∅ and repeatedly calculate new values for these until no further changes occur.

Therefore, we ensure that analysis ends up making this variable live at the end of the program.

An example of Liveness analysis and register allocation for a program that calculates the Nth fibonacci number.

The succ, gen and kill sets for the above program.

N is given as input by initializing n to N prior execution.
n is live at the start of the program since it is expected to hold the input of the program.

If a variable not expected to hold input at the start of the program is live it may cause problems as it might be used before its initialization.

The program terminates on instruction 13 where a holds the Nth fibnacci number therefore a is live at this point.
We can also note that instruction 13 has non successors succ[13] = ∅ hence set out[13] = {a}.
Other out sets are defined by out[i] = in[j].
In and out sets are initialized as empty sets and iteration happens until a fixed point is reached.

The order in which we treat instructions will determine how quickly we reach the fixed-point but has no effect on the final result of the iteration.
Information in the describe equations flows backwards therefore we calculate out[i] before in[i].
In the above example each iteration calculates sets in the following order.

The most recent values are used when calculating the right sides of the equations and therefore when a value comes from a higher instruction number, the value from the same column is used.

By the 3rd iteration we have reached a fixed point a the results stop changing after the second iteration.

Below we have a fixed-point iteration for a liveness analysis, we shall use it to explain the concept of interference. 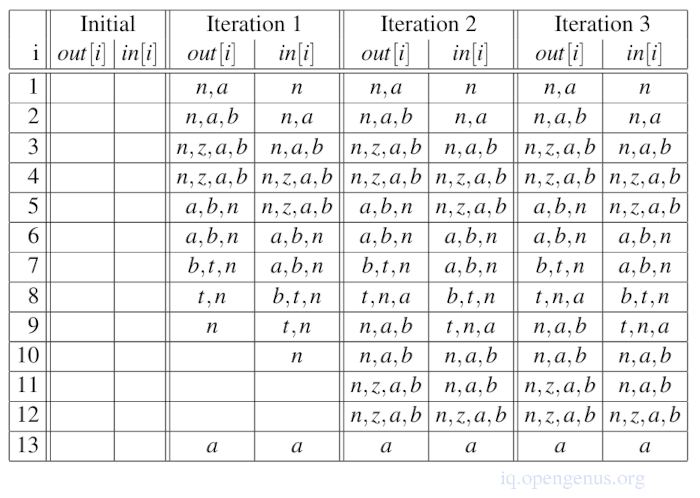 Definition: A variable x interferes with a variable y if x != y and there exists an instruction i such that x ∈ kill[i], y ∈ out[i] and instruction i is not x := y.

Two variables share a register if neither interferes with another.

We can also say that two variables should not be live at the same time with the following differences. 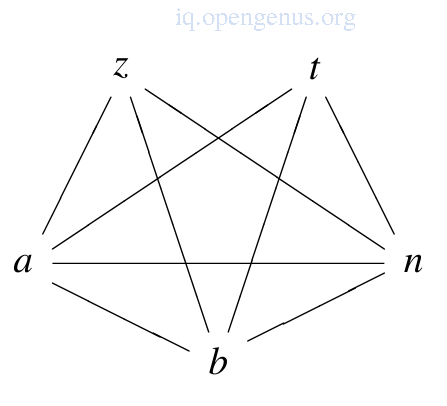 It is an undirected graph whereby each node is a variable and there is an edge between nodes x and y if x interferes with y or vice versa.

We generate interference for each assignment statement using the definition above

For register allocation, two variables interfere if they also interfere at any point in the program, interference can also define a symmetric relationship between variables since two involved variables cannot share a register.
A variable cannot interfere with itself and therefore the relation is not reflective.

Two variables share a register if they are not connected by an edge in the interference graph.

For this we assign to each node in the interference graph a register number such that:

The idea of this heuristic method is as follows; If a node in the graph has strictly fewer N edges, where N is the number of available colors(registers), we set the node aside and color the rest of the graph.

Coloring the graph from the previous section is as follows

Selection
3. Take a node and its connected nodes from stack an give a color different from other colors of the connected nodes.
3.1. If this is not possible, the coloring fails and we mark it for spilling
3.2. If there are more nodes in the stack process the with selection.

Points unspecified in the algorithm.

From simplification: Node to choose when none of them have less than N edges.
From Selection: Color to choose if there exists several choices.

If both of the above are chosen correctly we have an optimal coloring algorithm, unfortunately computing these choices is costly and therefore we opt to make qualified guesses.
We shall see how this can be done in the heuristics section.

If the selection phase is unable to find a color for a node the the graph-coloring algorithm fails meaning we give up keeping all variables in registers and hence select some variables which will reside in memory. This is spilling.

When we choose variables for spilling, we change the program so that they are kept in memory.

For each spilled variable x:

Following the above, we perform register allocation again.

Applying the algorithm to the interference graph.

Similarly if x is uncolored, we give it the same color as y if the color is not used for a variable that interferes with x.
This is called biased coloring.

We can also combine x and y into a single node before coloring the graph and only split the combined node if the simplification cannot find a node with less than N edges. This is called coalescing.

We can also perform live-range-splitting a converse of coalescing where by instead of splitting a variable we split its node by giving each occurrence of the variable a different name and inserting assignments between them when necessary.

Variables to such operations must be assigned to these registers before register allocation begins. These are pre-colored nodes in the interference graph.

If two pre-colored nodes interfere we cannot make a legal coloring of the graph, a costly solution would be to spill one or both.

An optimal solution is to insert move instructions to move variables to and from the required registers before and after an instruction that requires specific registers.

This specific register must be included as pre-colored nodes in the interference graph but are not removed from it in the simplification phase.

Register allocation is the mapping of a large number of variables into a limited number of registers.

In this article, we take a look at different ways to reverse vector in C++ Standard Template Library (STL) along with reversing a 2D vector.

Functions are an important abstraction mechanism in many programming languages. In this article we discuss how functions are implemented in compilers.