In this article we discuss attribute dependency graphs and attribute evaluation during semantic analysis phase in compiler design.

These are used to show the flow of information among attribute instances within a parse tree.

For each node in the parse tree, for example a node X, the dependency graph will have a node associated with X.

If a semantic rule is associated with a production P defines the value of a synthesized attribute A.b in terms of the value of X.c, then the dependency graph is said to have an edge from X.c to A.b. In more detail, at every node N labeled A where this production P is applied, we create an edge to attribute b at N from attribute c at the child of N that corresponds to this instance of symbol X in the body of the production.

If a semantic rule associated with a production P defines a value of an inherited attribute B.c in terms of the value X.a, the dependency graph contains an edge from X.a to B.c. For each node N that is labeled B and corresponds to an occurrence of B in the body of the production P, we create an edge to and attribute c at N from the attribute a at node M that corresponds to this occurrence of X. Keep in mind that M should be either the parent or a sibling.

For every node N that is labeled E, that has children corresponding to the body of the production, the synthesized attribute val at N is computed using values of val at the two children E and T.
Therefore a section of the dependency graph for every parse tree where this production is used will look like the image below.

An example:
We have the annotated parse tree for 3 * 5. 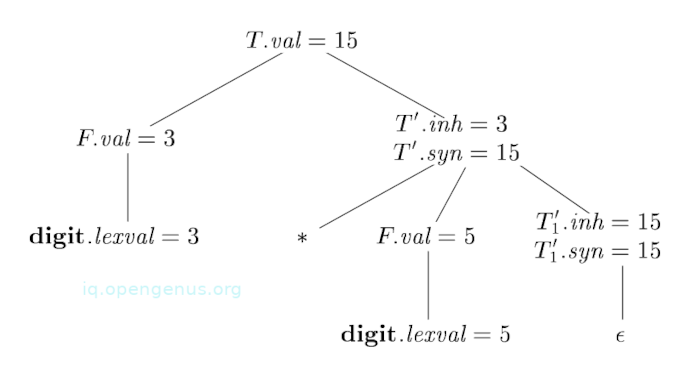 Numbers 1-9 represent nodes of the graph and correspond to attributes in the annotated parse tree for 3 * 5.

Nodes 7 and 8 represent a synthesized attribute syn associated with the occurrences of .
Edge from 6 to 7 is a result of the semantic rule 3 associated with production 3 from the SDD.

Edge from 7 to 8 is a result of a semantic rule associated with the production 2 from the SDD.

Node 9 represents attribute T.val and the edge from 8 to 9 is a result of the semantic rule associated with production 1 from the SDD.

A dependency graph characterizes all possible orderings in which we can use to evaluate attributes at various nodes of a parse tree.

If the graph has an edge (M, N), then the attribute that corresponds to M is evaluated before attribute of N.
Therefore the only allowed orderings for an evaluation are the sequences of nodes , , ..., such that if there is an edge of the dependency graph from to then i < j.
This ordering embeds a directed graph into a linear ordering referred to as the topological sort of the graph.

If the graph has no cycles, then there exists at least one topological sort otherwise there are no topological sorts, that is, there is no way to evaluate the syntax directed definition(SDD) on the parse tree.

We can see why there are no cycles by finding a node with node entering edge, if there was such a node, we proceed from predecessor to predecessor until we return to the same node we have already been at, this results in a cycle. Then we mark it as the first in a topological ordering and remove it from the graph and repeat this for the remaining nodes.

An example:
Looking at the dependency graph from the previous section, we can see there are no cycles, a topological sort ordering would be in the way the nodes are numbered, that is, 1, 2, 3, ..., 9.
See how every edge goes from one node to a higher-numbered node - this is surely a topological sort.
Another topological sort would be 1, 3, 5, 2, 4, 6, 7, 8, 9.

Dependency graphs show the flow of information among attribute instances in a parse tree.

In problematic SDDs, there are parse trees for which it is impossible to find an ordering that can be used to compute all attributes at all nodes since they have cycles.

Dynamic programming not only applies to a broad class of register machines but its application results in the generation of optimal code that runs in linear time.