Stack allocations are often restrictive and we may want resizable arrays which can survive function invocations, in this article we discuss heap allocation in compilers.

The heap is used for dynamically allocated memory.
It is useful for deallocation and allocation operations.

It is the portion of the store that stores data that will live indefinitely or until the program terminates.

Programming languages such as C++ or java allow the creation of objects whose existence is not tied to the procedure that creates them because objects/pointers to objects may be passed from procedure to procedure.
These objects are stored on the heap.

The memory manager interfaces the application programs and the operating system and is responsible for the allocation and deallocation of space within the heap.

The memory manager is the subsystem that allocates and deallocates space within a heap.

It is responsible for tracking all free space at all times.
It has two functions, allocation and deallocation.

Allocation when a program needs memory for a variable or object, the memory manager will produce a chunk of contiguous heap memory for the requested size.
If the size is available the allocation request is satisfied by the free heap space otherwise if the requested space is not available, it increases the heap storage by acquiring consecutive bytes of virtual memory from the operating system.
If there is no space at all, this information is passed back to the application program by the memory manager.

In lisp language, only one data element(a two-pointer cell) is used to build all data structures.

In some situations e.g having data that can be allocated on the run-time stack is possible in lisp.

The above two points allow simple memory management in lisp language however in most programming languages, neither conditions hold, data elements are of different sizes and there is no way to predict the lifetimes of allocated objects.

Program efficiency - It should make good use of the memory subsystem so as to assist fast execution of programs.
Programs exhibit locality - a non-random clustered way for accessing memory, the memory manager by attending to the placement of objects, it can make better use of space which might improve the speed of execution for the program.
Space efficiency - It should minimize the needed heap space by a program so as to allow larger programs to run using a fixed virtual address space.
This is achieved by reducing fragmentation.
Low overhead - overhead is the fraction of execution time spent performing allocation and deallocation these are frequent operations in many programs and as such must be as efficient as possible.

Modern machines are designed in such a way programmers write correct programs without concern for the memory sub-system.

A variance in memory access times is caused by hardware limitations in that, we can either build small and fast storage or large and slow storage but not both large and fast i.e It is impossible to build a memory with gigabytes of storage and fast access times. 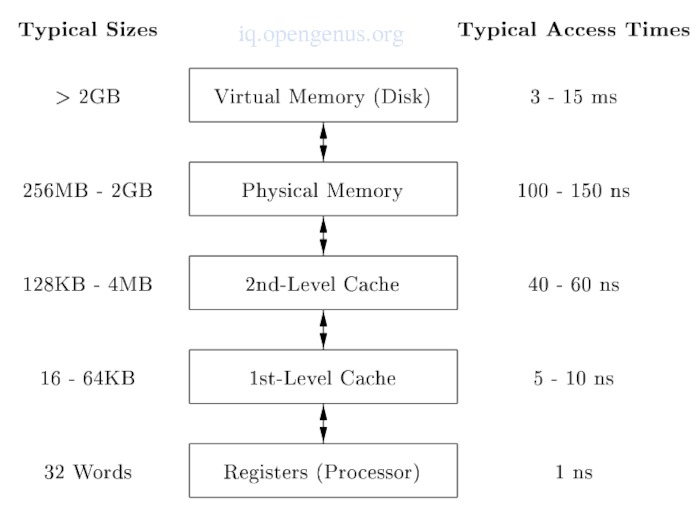 As can be seen from the hierarchy it is a series of storage elements with smaller faster ones closer to the processor and larger slower ones further from the processor.
A processor will have a small number of registers whose contents are controlled by the software.
Following this, it has levels of cache made up of static RAM which are in kbs to several mbs in size.
Then the main memory which will have hundreds of mbs or gbs of made up of dynamic RAM.
Then the virtual memory which is implemented by gbs of disks.

During memory access, the machine will first look for the closest data(lowest level) and if it is absent here, it looks in the next higher level and so on.

Since registers are scarce, their usage is tailored for specified applications and as such they are managed by generated compiler code.
Other levels are managed automatically and in this way not only does programming become simpler but the same program can work effectively across different memory configurations in different machines.
For each access to memory, in succession from the lowest level, the machine will search each level until data is located.

Most programs spend a lot of time executing a relatively small fraction of the code while touching only a small fraction of the data - locality.
Temporal locality of a program is whereby the memory locations a program accesses are likely to be accessed again within a short period of time.
Spatial locality is whereby a program's memory locations close to the location accessed are likely to be accessed within a short period of time.

"Programs spend 90% of their time executing 10% of the code"

Locality will allow us to take advantage of the memory hierarchy by placing the most common instructions and data in the fast-small storage while leaving the rest in the slow-large storage and by that we lower memory access times of a program significantly.
The above might work for common programs but not for data-sensitive programs that cycle through e.g large arrays.

Placing the mostly used instructions in the cache works well.
When a new instruction is executed, there is a high probability that the next will also be executed, this is a case of spatial locality.
We improve spatial locality by having the compiler place basic blocks - sequences of instructions always being executed sequentially, on the same page or cache line.
i.e instructions belonging to the same loop or function.
We can improve temporal and spatial locality by changing the data layout or order of computation e.g programs visiting large amounts of data to perform small computations won't perform well, it is more preferable to bring some data from the slow level memory hierarchy to the faster level and perform all necessary computations while it resides here.
We can apply the above recursively so as to reuse data in physical memory, caches and registers.

When a program begins execution, the heap is one contiguous unit of free space, as the program allocates and deallocates memory, this space is broken up into used and free chunks.
We define holes as free memory chunks.
For each allocation request the memory manager places the requested chunk of memory into a large enough hole and unless a hole is exactly the right size, we split a hole creating a smaller hole.
For each deallocation request, freed chunks are added back to the free space pool.
We coalesce contiguous holes into larger blocks as the holes only get smaller. If we are lousy in this process we might end up with a fragmented memory consisting of a large number of small non-contiguous holes.
It is now possible that no hole will be large enough so as to satisfy future requests even though there is sufficient aggregate free space.

We can reduce fragmentation by controlling the placement of objects in a heap. A good strategy is to allocate the requested memory in the smallest large enough hole - best-fit.
This best-fit algorithm spares large holes so as to satisfy subsequent larger requests.
Alternatively first-fit is whereby an object is placed in the lowest hole first(lowest address) which fits. Although it is faster in placing objects, it is inferior to best-fit in terms of performance.
For a more efficient best-fit, we separate free space chunks size-wise into bins. We can have more bins for smaller sizes since there are many small objects.

How binning strategy makes it easier to find the best-fit chunk.

Best-fit improves space utilization however it might not be best for spatial locality since chunks allocated at about the same time tend to have similar reference patterns and lifetimes.
Placing them close to each other will improve the program's spatial locality.
We can modify the placement in case when a chunk of the exact requested size can't be found, we use the next-fit strategy whereby we try to allocate the object in the chunk that has last been split, whenever enough space for a new object remains in the chunk. This improves the speed of allocation.

During manual object deallocation, the memory manager must make its chunks free so as to be allocated again.
It might also be possible to combine(coalesce) the chunk with adjacent chunks so as to form a larger heap. An advantage is that we can always use a large chunk to do the work of small chunks of equal size but small chunks can't hold larger objects as the combined chunk could.
If we keep a bin for chunks on a fixed size, we might not prefer coalescing as it is simpler to keep all chunks on one size in as many pages as needed.
A simple allocation/deallocation scheme is to use a bitmap with a bit for each chunk in the bin.

When a heap is managed as a whole without binning or we are willing to coalesce adjacent chunks and move the resulting chunk into different bins if necessary. We can use data structures to support coalescing of adjacent blocks.

The size of the array or data may not be know until it is allocated, size can also be increased later whereby a new array is allocated and references to the old array are redirected to point to the new array.

Stack allocation is a run-time storage management mechanism where by activation records are pushed and popped onto the stack as they begin and end. In this article we discuss stack allocation, activation trees, records, calling sequences and variable-length data on the stack.