Stack allocation is a runtime storage management mechanism for the compiler whereby activation records are pushed and popped onto thee stack as activations begin and end by use of predefined routines in the compiler.

Compiling languages using procedures, functions or methods as units of user-defined actions require the use of a stack for managing their run-time memory.
When a procedure, function or method is called, space for its local variables is pushed onto the stack.

An activation record will contain all information necessary to call the procedure.
Information in an Activation Record
Local data - stores temporary and intermediate values of an expression, machine status - stores information such as registers, program counter statuses before the procedure is called.
Control link - stores the address of an activation record of the calling procedure.
Access link - stores information about data which is outside the local scope
Parameters - stores parameters such as input parameters for a calling procedure, these are stored in registers whenever possible for efficiency,
Return value - stores return values for procedures which return, note that, register storage is preferable for its efficiency.

Program control flow is sequential and when a procedure is called, its control is transfered to the called procedure which when executed, returns control back to the caller.

The above program reads nine integers into an array and sorts them using a recursive quickSort algorithm.
The main function;

Activations for the program.

The call to the partitioning procedure partition(1,9) returns 4, therefore arr[1] - arr[3] will hold all elements less than 4 and arr[5] to arr[9] hold elements larger than pivot 4.

This control flow enables us to be able to represent a series of activations in the form of a tree - activation tree.

Note: For control stack images, activation records elements appearing lowest on the page are closest to the top of the stack.

An example of a general activation record 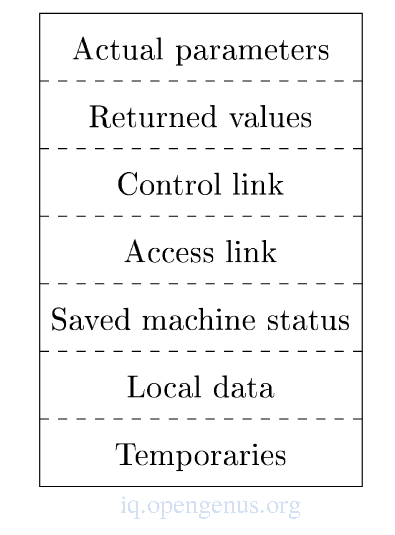 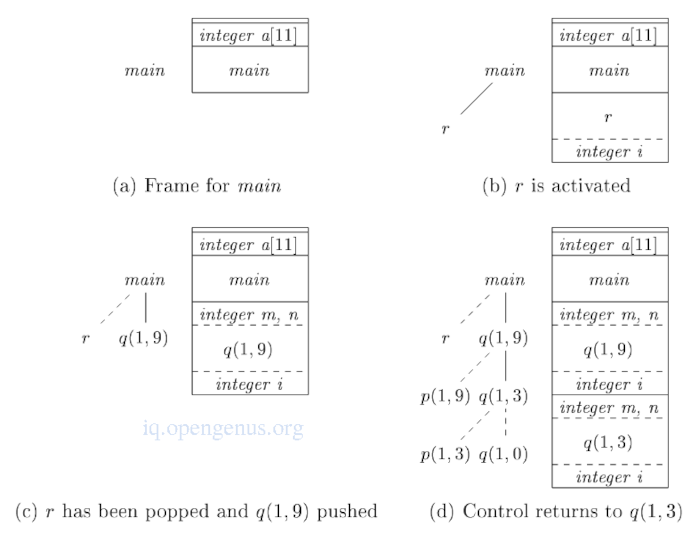 Dashed lines represent terminated activations.
(a). Array a is global therefore it is allocated space before execution begins with an activation procedure main.
(b). When control arrives at the first call in the main body, procedure r is activated and its activation record pushed to the stack.
Activation record for r will contain space for local variable i.
When control returns from the r's activation, its record is popped off the stack and main's record is left.
(c). Control is now at q with actual parameters 1, 9, this activation record is placed onto the stack. This record will contain space for parameters m, n and local variable i. Space used by the r call is reused on the stack.
Data local to r will not be available to q(1,9).
When q(1,9) returns, the stack will have the activation record for main again.
(d). Activations p(1,3) and q(1,0) begins and end during the lifetime of q(1,3) which leaves the record q(1,3) on top.

An example of variable-length data is variable-length arrays whose size depends on the value of one or more parameters of the called procedure.
In this section we discuss how to allocate objects and other structures whose sizes are not known on the stack.
The reason for this is to avoid the expense of garbage collecting this space. 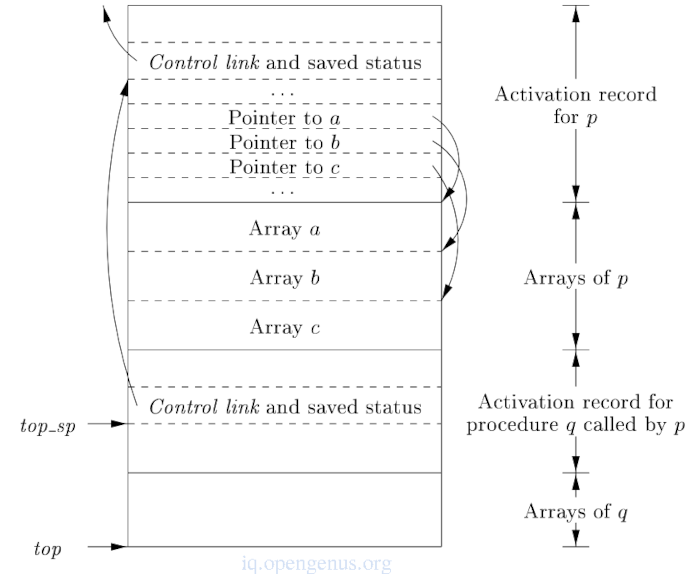 Procedure p has three local arrays whose sizes cannot be determined at compile time.
Storage for these arrays is not part of p's AR even though it appears on the stack.
Only a pointer to the beginning of each array appears in the AR and therefore during p's execution these pointers are known offsets from the top-of-stack pointer and the target code is able to access array elements through these pointers(top and top_sp).
top marks the top of the stack(beginning of the next AR).
top_sp finds local fixed-length fields of the top activation record.

The code that repositions these two pointers is generated at compile time.
When q returns, top_sp can be restored from the saved control link in the AR for q.

The new value of top is top_sp minus length of the machine status, control and access links, return value and parameter fields.
This length is known to the callee at compile time although it may depend on the caller is the number of parameters can vary across calls to q.

The division of tasks between caller and callee 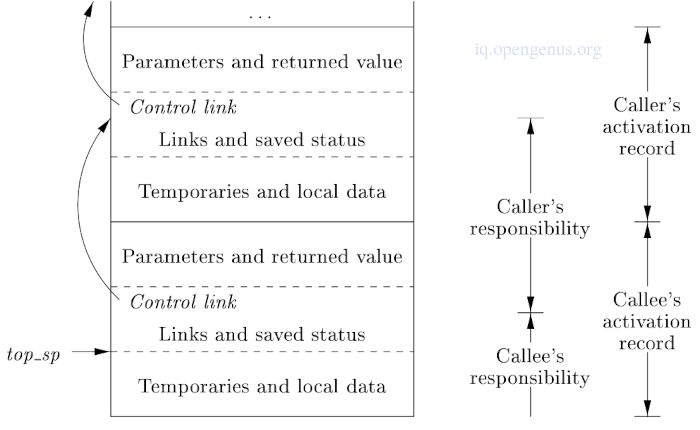 The register top_sp points to the end of the machine-status field in the current top AR and since this position is known to the caller, the caller is responsible for setting top_sp before control is passed to the callee.

The calling sequence and division(caller - callee)

Storage is organized as a stack also called a control stack.
Activation records are pushed onto the stack as activation begins and popped when they end.

Stack allocations are often restrictive and we may want resizable arrays which can survive function invocations and therefore programming languages allow use of heaps also called dynamic memory allocation. In this article we discuss heap allocation in compilers.

In this article, we have explored the concept of Amortized Time Complexity by taking an example and compared it with a related concept: Average Case Time Complexity.