In this article, we discuss the logic programming model which finds many application areas involving facts and computing relations between them.

Logic programming is a computer programming paradigm based on logic where program statements express facts and rules about a problem within a system of formal logic.
Examples of logic programming languages are, Prolog, Datalog, Alice, Ciao, ASP, Twelf.

It is based on the specification of a relationship between terms, facts and using these, together with rules for inference new facts can be generated from existing facts.

Logic programming enables one to request specific inferred facts by executing queries which are obtained by the program by searching through clauses and combining them in various ways, when these combinations don't produce the correct results, backtracking is performed.

From this search variables in the rules may be bound to terms, these bindings will have to be undone during backtracking.
These terms may be constants, structures(may hold bound/unbound or other structures), and variables.
This binding is done through unification

Logic programming expresses knowledge independent of implementation.
Programs are more flexible, compressed and can be understood,.
It's use extends beyond computational disciplines as it relies on reasoning and a precise meaning of expressions.

It can be naturally changed so as to support special forms of knowledge such as meta-level or higher-order knowledge.
Logic programming enables knowledge to be separated from its use and therefore it is machine architecture independent.

To understand logic programming, we shall first see the differences between a computation and a deduction.

Computation
To compute we start from the given expression and according to the fixed set of instructions(program) we can generate a result.

Computation is mechanical and requires no ingenuity.

Deduction
To deduce we start from a conjecture and according to the given set of rules(axioms, inference rules) we try to construct a proof of the conjecture.

Logic programming is based on named relations between terms, facts stating these relations and inference rules for new facts which come from established facts.

A fact consists of the name of the relation and its terms in a syntactic notation.
e.g a binary relation, parent/2 means the relation is named parent and governs 2 terms.

A query could be, ?-parent(x, doe) where by x is an unbound variable.
The above query asks the system to scan and find facts matching the query then shows the values of the variables for which the matches occur.

The body of the query is the goal of the search and a fact matches a goal if there is a binding for the variables in the goal. Therefore the goal in this case results in one successive binding X = john.

It is conventional for variable names to begin with a capital letter and constants with a small letter.

Unlike facts which may contain variables, queries don't need to and this feature is useful for expressing a fact like equal(X, X) which states that X equal X for any value of X.

Example of a rule

:- is the head of the rule and the following part is the body of the rule.
The above rule means that after establishing the facts parent(X, Y) and parent(Y, Z) for value X, Y, Z, we infer the fact grandparent(X, Z).

We can also interpret it as replacing the goal grandparent(X, Z) by the goal list parent(X, Y), parent(Y, Z) for any X, Y, Z bindings.

The inference technique is as follows;

We therefore make a copy with fresh variables

The answer to the query is grandparent(john, doe).

The simplest form of unification involves constants and variables as we have seen however there are three more possibilities namely;

Unifying of structures, lists and sets.

A structure is a named list of a fixed number of components also called functor.
E.g, times(2, X) is an example of a structure with name times and components 2 and X.

Structures can only be unified with other variables or structures.
Two structures are unified by the same rules as (head, goal) pair when their names and number of components are equal furthermore these components should be unifiable pairwise by finding proper bindings.

Unification of lists follow the same rules as for structures.

We use the unify instruction since this multiplication might occur to different degrees for each term pairs in the head and first goal.

The idea is to perform the unification one term pair at a time rather than for the
entire(head goal) pair. and we have

The following sets of C data types are used for the construction of terms.

We define Term as a discriminated union of constant, variable and structure.
A constant is represented as a pointer to its value and stored as a string.
A variable is also represented by a pointer and it's name is kept.

A structure is implemented as a record with three fields specifying the functor, number of components and a pointer to an array of N components which is useful for allocation.

The above unify_terms() routine will take care of any bound variables by dereferencing the terms.

A term is unbound when it remains a variable after dereferencing.
The function deref() follows a pointer chain until it finds a non-variable or variable with a zero pointer.

Unification with at least one unbound variable.

The routine identifies a special case(where both bound and unbound variables are the same). This unification is trivial.

If two terms are of different types, then the unification fails otherwise a suited routine for the data type is called.

Two constants are unified when a string comparison on their values succeed.

First the two structures are checked if they have the same arity and then unify_terms is called for each pair of terms.

If it succeeds, unification of the two structures succeeds otherwise it fails.

Variables are associated with each other such that they are both unbound, when one of them is bound to a constant or third variable, so will the other.

This is done by binding one of the variables to the other and dereferencing any variable before use so as to find out what it is actually bound to.

The image shows the expected result of a sequence of four variable-variable bindings, first B-A, C-B, D-B and E-C. 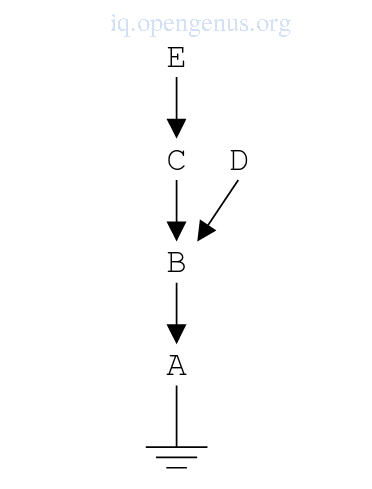 The image shows the actual binding. 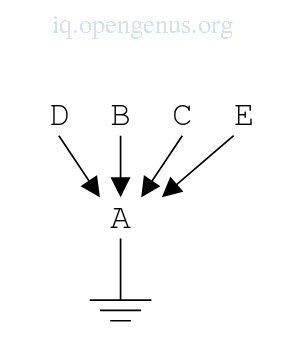 Binding B-A results in a binding B-A but binding C-B starts by dereferencing B and C only to find B is actually A therefore in the implementation C is bound to A instead of B. This happens for bindings D-B and E-C.

Prolog is most widely used logic programming language, it involves a pattern-matching mechanism, a backtracking strategy which searches for possible solutions and uniform data structures from which programs are built.

In this article, we discuss the general compilation technique for a full recursive backtracking search over clauses combined with a full unification of terms.

How do we find data within a procedure that does not belong to that procedure, In this article we discuss how to access data that is not local to a procedure on the stack.