In this article, we take a look at how a procedure accesses data used within it but doesn't belong to it.

This is possible by the modifying the implementation of the run-time stack as we shall come to see.

In C languages, variables are defined either within a single function(local variables) or outside the function(global), on the other hand it is impossible to declare a procedure whose scope is within another procedure.

Languages which do not allow nested procedure declarations allocate storage variables and accesses them in the following way;

A advantage of static allocation for global variables is that declared procedures are passed as parameters or returned as results without changing the data access strategy. e.g In C we pass a pointer to the function.

The static-scoping rule states that a procedure is permitted to access variables of the procedure whose declarations surround its own declaration.

Accessing non-local data is a complex task for languages which allow nesting of procedure declarations while using the static-scoping rule.

This is because knowing at compile time that a function p's declaration is immediately nested within a function q won't tell us the positions of their activation records at run-time since when either of the procedures are recursive they may have several activation records.

The problem is that this requires additional run-time information about activations, we solve this using access links as we shall come to see.

We introduce the ML programming language since it allows nested procedures.

Some properties of ML

Variables with unchangeable values are initialized as follows

An example of quickSort algorithm in ML

We can directly implement the normal static-scope rule for nested functions by adding a pointer - access link, to each activation record.

That is, if a procedure p is nested within procedure q in the source code, then the access link in any activation will point to the most recent activation of q.
It is important for the nesting depth q to be one less than the nesting depth of p so that the access links form a chain from the activation record at the top of the stack to sequences of activations located at progressively lower depths.
Along this formed chain are all the activations whose data and procedures are accessible to the currently executing procedure.

Access links for finding non-local data for the quickSort algorithm
We have represented function names using their first letters and shown some of the data that might appear in various ARs as well as access links for each activation. 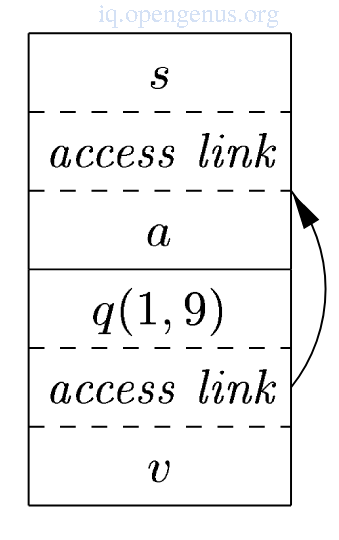 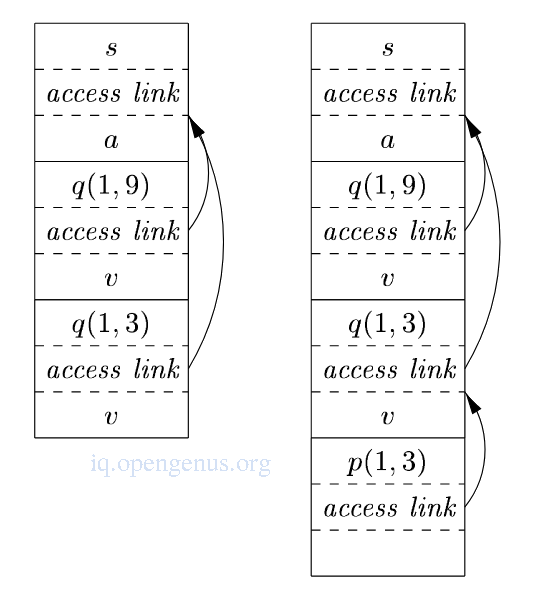 e.g from the quickSort() example, the call of quickSort() by sort() to set up the access links from 1 and the call to partition by quickSort() to create 2(right image).

When a procedure p is passed to another procedure q as a parameter and q calls its parameter(calls p in the activation of q), it is possible that q does not know the context in which p appears in the program and therefore impossible for q to know how to set the access link for p.

We solve this problem by the following, when procedures are used as parameters, the caller needs to pass the name of the procedure-parameter along with the proper access links for the parameter.

The caller will always know the link because if p is passed by procedure r as an actual parameter, p must then be named accessible to r and therefore r can determine the access link for p as if p were being directly called by r 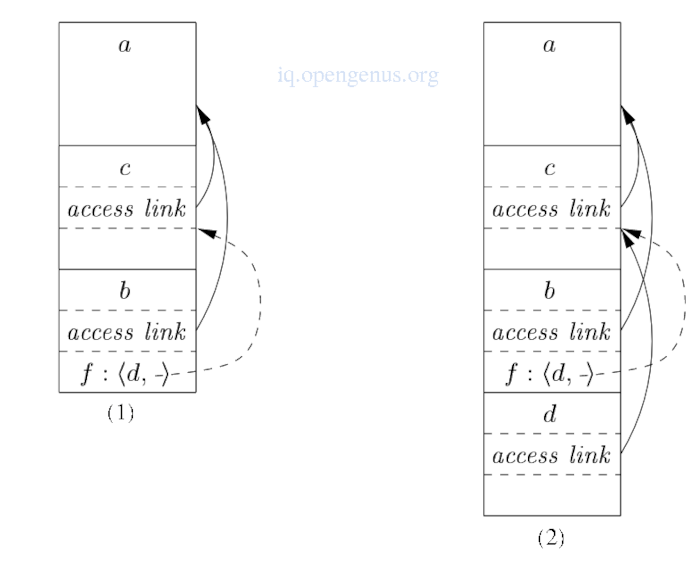 access-link approach to non-local data have a drawback that is the nesting depth gets large, we follow long chains of links to reach the needed data.
To improve on this, we can use an auxilliary array d which we call a display and will contain a pointer for each nesting depth.

We expect that at all times d[i] is a pointer to the highest activation record on the stack for any procedure at nesting depth i. 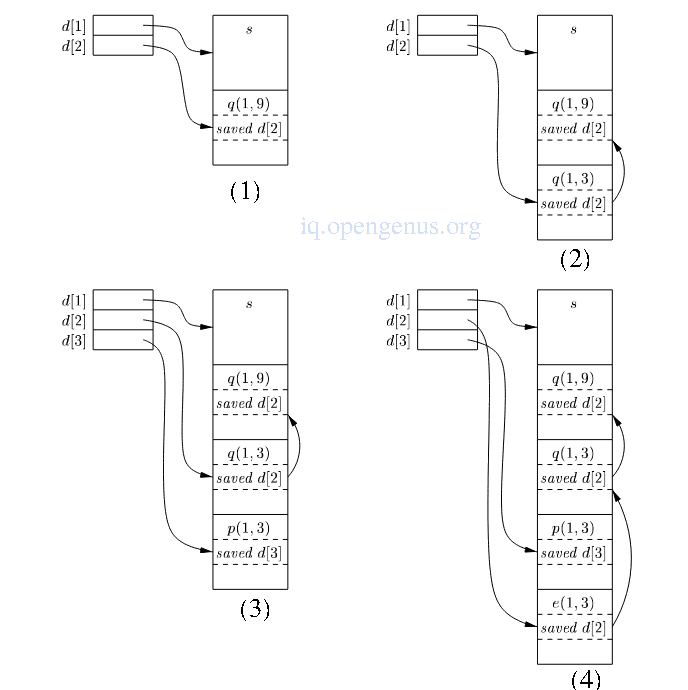 An advantage of this is that if procedure p is executing and needs to access element x belonging to a procedure q, we look only at d[i] where i is the nesting depth of q and follow the pointer d[i] to the activation record for q where x will be found at a known offset.
The compiler will know i and therefore can generate code to access x using d[i] and x's offset from the top of the AR for q and therefore the code doesn't need to follow a long chain of access links.

We save previous values of display entries in new AR so as to maintain the display correctly.
If procedure p at depth is called and its activation record is not the first on the stack for a procedure at that depth, the activation record for p will be required to hold previous values of d[], while d[] itself is set to point to the activation of p.
When p returns, its AR is removed from the stack and we restore d[] to have its value prior to the call.

Accessing non-local data is compilicated in programming languages where a procedure is declared inside another procedure.

We have use ML functional programming language to demonstrate how we go about this access.

In logic programming, the user only has to specify the problem and the system will find the solution based on the provided information however substantial effort is needed to implement a logic language compiler. In this article we discuss how we go about this.