In this article, we discuss garbage collection, a mechanism that is performed by the garbage collector which reclaims memory that it can prove is not used. 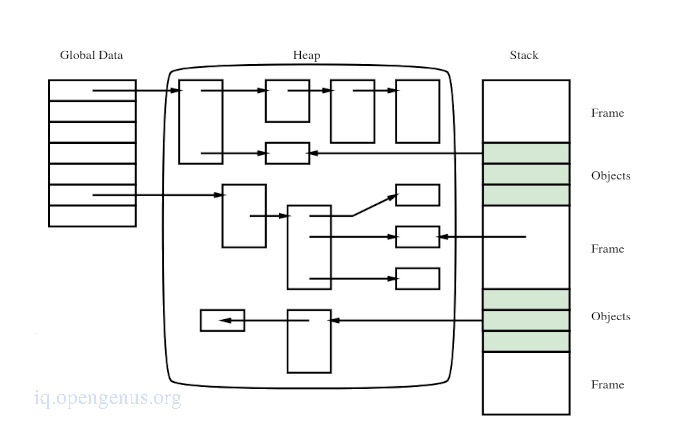 Global data is a collection of global variables. It is globally visible throughout the execution of a program and of constant size.
The stack will contain a series of frames where each frame will represent a function scope. Stack frames are deallocated when the procedure which is associated by them terminates.
Both global data and the stack have references called roots, in the heap which holds chunks.

These chunks on the heap are allocated and deallocated explicitly. A program will detect whether a chunk is no longer needed so that it may be deallocated and the memory previously used by the deallocated chunk reused.
A free list is the structure responsible for management of deallocated memory that is waiting for reallocation.

Issues with this type of memory management.

Instead of the application task explicitly deallocating chunks when they are no longer needed, a garbage collector uses program's state information to determine whether any valid sequence of mutator actions could be referencing a chunk.
If no program actions reference a chunk, then this chunk is unnecessary in the on-going computation and therefore it is considered garbage therefore it is reclaimed by the collector.
The remaining referenced chunks are referred to as live since they are still referenced by the sequence of actions.
Note, the cost of allocating stack frames on associated chunks on the garbage collector heap is comparable to the cost of using the traditional stack allocation.

Reachable objects are those objects that can be referenced by a future sequence of valid mutator actions.
Live objects are those that will referenced in the future by the mutator, these are necessary for ongoing computations.
A garbage collector can be thought of as performing a liveness analysis on heap objects by locating chunks that cannot be referenced directly from a root set(stack and global variables) or from a root set via other chunks on the heap. 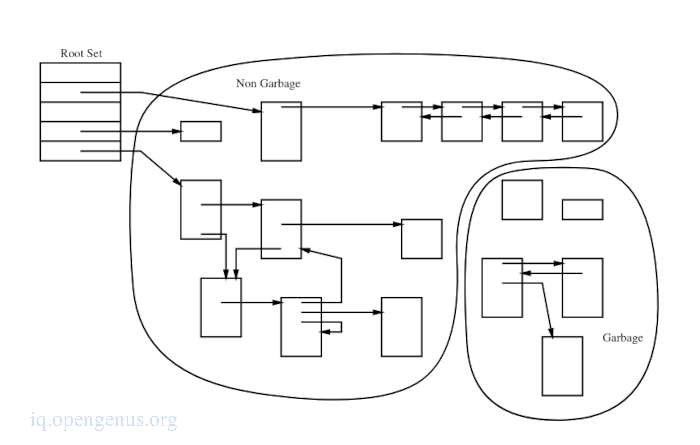 From the image we can see that live chunks are accessible from root set and no garbage chunks is reachable.

Looking at garbage collection as a graph traversal problem will permit application of graph algorithms such as breadth first and depth first search traversal for tracing the heap to determine whether a chunk is garbage.

Looking at assumptions 3, 4 and 5. We see that implementation trades off lack of type information for increased memory retention.
The effectiveness of this trade off depends on the following factors.

1. Pointer size.
A short pointer (16 or 32 bits) will lead to a relatively high density of objects in the address space which will lead to a high probability of random bit-pattern being mistaken for a valid pointer int the heap.

2. Volatility of data.
If an object is allocated to an address pointed to be static data, it is pinned for the lifetime of the program while changeable data is pointer elsewhere which will allow the pinned object to be freed.

4. Interconnectedness of chunks.
Large multi-cyclic data structures are likely to be retained for longer than single element object which are lacking pointers to them from other garbage.

This is one of the oldest garbage collection algorithms(1976).
It requires to keep a count of the number of inward references to a chunk, either in the chunk or an external table.

When the last reference to a chunk is removed, the chunk is unreachable by the mutator and is considered garbage.

Pros and cons of reference counting.

This algorithm works by traversing the stack to find pointers in the heap then follows each of them marking them reachable, in the next stage it sweeps through memory collecting unmarked objects into a free list leaving marked objects.

It is invoked when there is limited space for a requested allocation.This algorithm runs the risk of a fragmented memory which translates to poor performance because objects are never moved once allocated.

The cost of this algorithm is proportional to the available memory.
Since its first implementation, improvements and optimizations have been made, such as division of chunk size for efficiency.

Various implementations use a time stamp to mark chunks mutated during a long making phase which allows both the mutator and collector free access to the heap.

Pros and cons of mark and sweep.

This is a variant of mark-sweep that solves the problem of memory fragmentation by compacting reachable chunks in the collector phase to remove space between them.
This algorithm is not useful if the relocated objects are destroyed.

A fixed number of chunks are copied, usually from the from-space to the to-space, each time a new chunk is allocated.
If the chunk being pointer to has not yet been copied, space is reserved for it in the to-space

If the semi-space garbage collector is incremental, that is, it only copies a portion of chunks before returning control to the mutator, then the mutator is responsible for determining which copy of the chunk to use(from-space or to-space).

The value of the forwarding pointer in the chunks header is used to determine the copy of the chunk to use and requires a level of indirection every time a chunk is referenced by the application during garbage collection only until chunks have been copied. 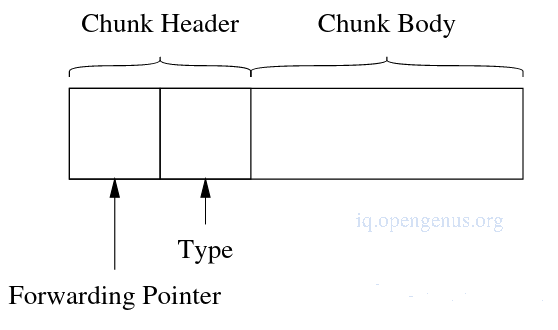 Heap at the end of cycle.

This algorithm converts the semi-space copy algorithm to a non-copying algorithm at the cost of not defragmenting memory thereby saving the costs of copying areas of memory.
It avoids defining semi-spaces as contiguous ranges of memory and optimally uses a circularly doubly linked list to create logical spaces.

These algorithms use spaces to hold objects based on their age.
Youngest chunks(newer generation) are managed similarly to semi-space garbage collections.
After surviving a fixed number of cycles, chunks are promoted to the older generation. A higher proportion of objects in the younger chunks will die with each cycle since they are smaller and thus less work is required.
A list of inter-generational references is held enabling older generations to be managed separately.
Treatment of older generations will differ across different implementations.
A generational implementation that uses train ordering algorithm which is an elaboration of reference counting will group chunks into ordered disjoint sets 'trains' such that circular structures will be grouped in the same train.
When the last reference is removed, the train is reclaimed.
This algorithm although useful faces drawback such as poor handling of popular chunks, slow garbage collection in case of misguided promotion criteria.

Assembly language enables programmers to write human readable code that is close to machine language hence providing full control over the tasks the computer performs. In this article we discuss the x86 processor architecture assembly language.

There are some common themes and activities that DevOps engineers find themselves engaged in. Here's a quick overview of what a typical day might look like.