We will be specifically discussing NP Hard problems in this article.

NP - Polymonial time but are non-Deterministic.

A decision problem is NP-hard when there exists a polynomial-time many-one reduction of any NP problem to the current NP hard problem.

Basically, to prove a problem NP hard we need to reduce it to a problem which is already labelled NP hard. This reduction has to take polynomial time,though.

Once the reduction is complete, we only need to write a non deterministic algorithm for the problem to make it NP Complete. But in this article we focus on reducing and identifying problems as NP Hard.

An example of an NP-hard problem is the decision subset sum problem: given a set of integers, does any non-empty subset of them add up to zero? That is a decision problem and happens to be NP-complete.

Another example of an NP-hard problem is the optimization problem of finding the least-cost cyclic route through all nodes of a weighted graph. This is commonly known as the traveling salesman problem. Both the problems are discussed below.

In the subset sum problem we are given a finite set S and a target t. We need to determine whether a subset S' exists in S such tat the sum of elements in S' is equal to t. We can reduce 3CNF SAT to this problem to prove it an NP Hard problem.
Given a 3 CNF formula over variables x1,x2,x3...xn with clauses C1,C2,C3...Cn each containing exactly 3 distinct literals, the reduction algorithm constructs an instance (S,t). We make 2 simplifying assumptions. First,no clause contains both the variable and it's negation i.e every element is either in the resultant subset or it is not. Second, each variable occurs in at least one clause i.e for each element in the given set we have to decide whether or not it is in the resultant subset.

In the travelling salesman problem,a salesman must visit n cities. Modelling the problem as a complete graph with n vertices, we ca say that the salesman wisj=hes to make a tour, or a hamiltonian cycle, visisting each city ecxactly once and finishing at the city he starts from. There is an integer cost c(i,j) to travel from city i to city j, and the salesman wishes to make the tour whose total cost is minimumwhere the total cost is the sum of edges along the edges of the tour.
Formally,
TSP = {(G,c,k): G = (V,E) is a complete graph
c is a function from VxV -> Z
k belongs to Z and
G has a travelling salesman tour with cost at most k}

To prove TSP is NP hard,we reduce it to hamiltonian cycle problem.Let G = (V,E) be an instance of HAM_CYCLE. We construct an instance of TSP as follows. We form the complete graph G'= (V,E') where E'= {(i,j) : i,j belongs to V and i != j},we define the cost function by,
c(i,j) = 0 if (i,j) belongs to E
1 if (i,j) does not belong to E
We now show that graph G has a hamiltonian cycle if and only if graph G' has a tour of cost at most 0. Suppose that graph G has a hamiltonian cycle h. Each edge in h belongs to E and thus has cost 0 in G'. Thus, h is a tour in G' with cost 0.Conversely, suppose that graph G' has a tour h'of cost at most 0. Since the costs of edges in E'are 0 and 1, the cosy=t of tour h'is exactly 0 and each edge on the tour must have cost 0. Therefore, h' contains only edges in E. We conclude that h'is a hamiltonian cycle in graph G.

How to know whether a problem is NP Hard?

Karp Reduction is a polynomial-time many-one reduction from a problem A to a problem B for transforming inputs to problem A into inputs to problem B, such that the transformed problem has the same output as the original problem. Using this transformation, the output produced after taking in a particular input for problem A, gives the same output for another input for problem B. Basically it transforms the input of one problem to the input of another problem such that the output of both the problems remains same.

This requires the inputs to both the problems to be similar or atleast easily modifiable to match each other logically, for example the inputs for the clique problem and the 3SAT problem can be transformed to one another. The 3SAT problem uses boolean variables and so the inputs for the clique can be taken as boolean values corresponding to the vertices of the clique. The transformation of 3SAT to clique is described in this article. The outputs of the problems must also be the same as the transformation is used to transform inputs of one problem into the inputs of another problem to prduce the same output.

NP-hard problems are often tackled with rules-based languages in areas including:

This image will give you a insight about the different types of NP problems and there relation with each other. We will discuss the diagram in detail below. 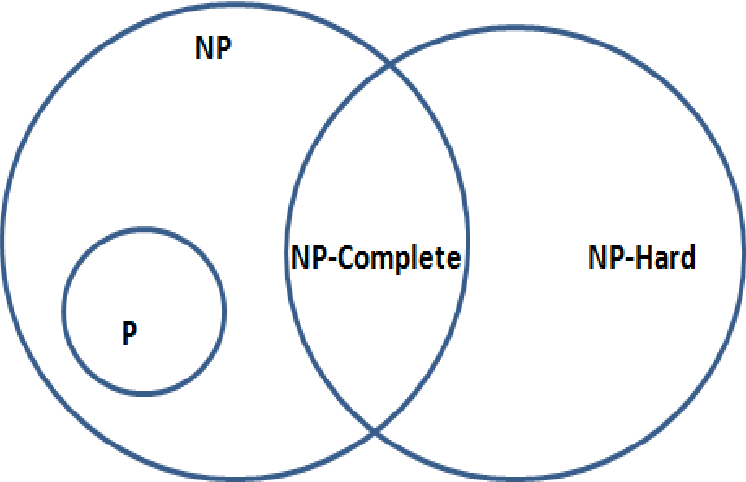 We have covered the basics of jQuery in depth from setting up an environment to selecting elements, applying methods, events, effects and much more.