Parallel and distributed systems have multiple processors that communicate with each other and therefore programming languages used in such systems express concurrency and communication.

Multiple processors give rise to new problems for the language interpreter.
A parallel system will have the goal of solving a given problem as fast as possible by using multiple processors which cooperate to solve a problem.

They mainly feature applications that require huge amounts of compute time.
A distributed system will have many processors but unlike the parallel system, it will work on other different tasks.

A distributed system offers fault tolerance in that if one component breaks other components will take over the tasks of the broken component, it can also be extended incrementally such that new components are integrated into the system seamlessly.
Examples of distributed systems are grids, which will have many computing and shared data resources across different organizations, computational clouds, which provide remote resources that can be hired by users.

The architecture of a system is an important factor in compiling parallel and distributed programs.

Processes in different processors run in shared address space.
All processors will have access to a single shared memory.

These processors exchange information by reading and writing variables in the shared memory space.

To simply construct a multiprocessor we can connect multiple processors onto a single bus.

Modern processors are multiprocessors as they have multiple cores which communicate through shared memory/caches.

These consist of multiple processes which are connected by a network.
Processes in different processors run on different address space.

Processors in a multicomputer communicate by sending messages over the network which can either be custom made for the multicomputer e.g IBM blue gene or a LAN e.g ethernet, myrinet or infiband.

A cluster is a multicomputer built of of off-the-self processors. 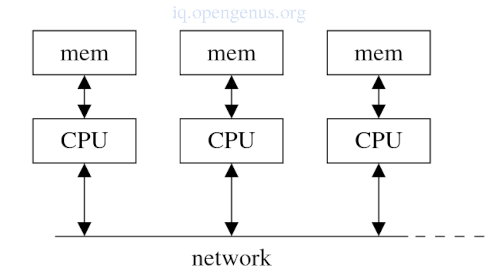 We can combine both multicomputer and multiprocessors into a single system by connecting multiple computer nodes using a network whereby each computer node is a PC with multiple processors and cores.

This goes to show that these systems don't need direct compiler support and as such a programmer becomes responsible for making the correct library calls since there is no compiler to check the calls.

Mistakes such as incorrect library calls may occur e.g a process sending an integer value when a floating point is expected, this type error won't be caught and results in an incorrect program behavior.

Other programming systems consisting of complex run-times are designed as extensions to existing programming languages and often implemented by a compiler that will check for errors.

The boundary between the OS and run-time system is not clearly defined as primitives such as processes and communication can be implemented by both.

Moving functionality from OS to the run-time system demonstrate advantages such as, saving of expensive interactions with the OS which gives the compiler more control over the implementation of the functionality. 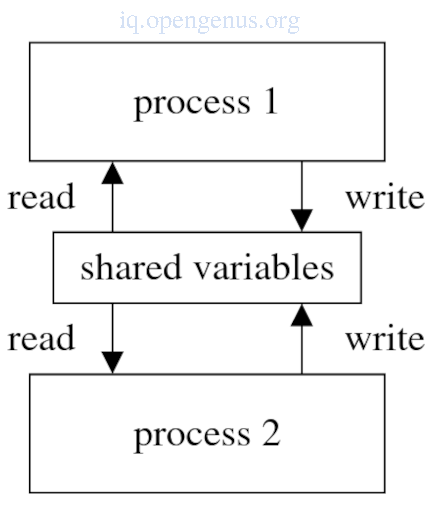 A process is an abstraction of a physical processor, It executes code sequentially.

The simplest form of parallel programming can be thought of a collection of these processes communicating through shared variables.

Conceptually, a process consists of a virtual processor which provides the processing power and address space(an abstraction of physical memory) to store data.

The fork statement forks off a copy of sort() as a new processes while passing three parameters is used to create a new process, we obtain parallelism by creating multiple processes.

In a shared-variable programming model part of the address spaces of the processes overlap therefore multiple processes end up sharing variables(shared variables).
Shared variables can be read and written by these processes and therefore provide a means of communication between processes.

A problem with this model is synchronizing access to these variables. If two processes simultaneously try to change a variable this will lead to an inconsistent unpredictable data structure.

Synchronization primitives are used to prevent this type of behavior by mutual exclusion synchronization whereby only one process can access a shared variable at any given time.

Lock variable is an example of such a primitive that has indivisible operations to acquire (set) and release the lock. If a process tries to acquire an acquired lock, it will block until the lock has been released.

Only one of the process will be able to execute the increment statement at any given time.

This method is low-level and prone to errors e.g If a shared variable is not protected by a lock a program can still behave incorrectly.

A monitor is a high-level solution to the above problem. A monitor is an abstract data type in that will contain data and operations to access data.
Data encapsulated by a monitor will be shared by multiple processes and thus allow one operation inside the monitor any given time.

In monitors condition variables such as wait() and signal() are used to express this synchronization.

wait(c) on a condition variable c will block the invoking process and signal(c) wakes up the process.

An example of a monitor 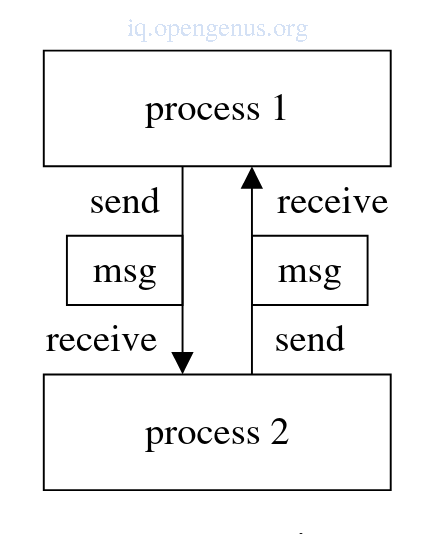 In this model each process accesses its own local data.
Processes exchange data by sending messages to each other.
send statement and receive statements are primitives used for this model.

In low-level systems, the message is an array of bytes, in higher-level systems it is a record-like structured value with different fields.

In this basic model, sender and receiver will specify the name of each other however we can add more flexibility by letting the receiver accept any messages sent by a process in the program.
This is useful when receiver doesn't know who will send the next message.
We can add flexibility by avoiding specifying process names and using port names, that is, a message sent to a port is delivered to a process that issues a receive statement with the corresponding port.

In some programming languages the receiver can for example a receiver may specify messages it will accept or the order of handling messages if it receives multiple messages.

Implicit receipt is whereby a new thread(a light-weight subprocess with its counter and stack) is created for every incoming message.

The thread executes a message handler(a routine for each type of message) defined by the programmer after which it terminates.

Multiple threads can be executing in a single process and thus share the global variables of the process.

Threads can also be used for communication between processes whereby a separate thread is created for this. 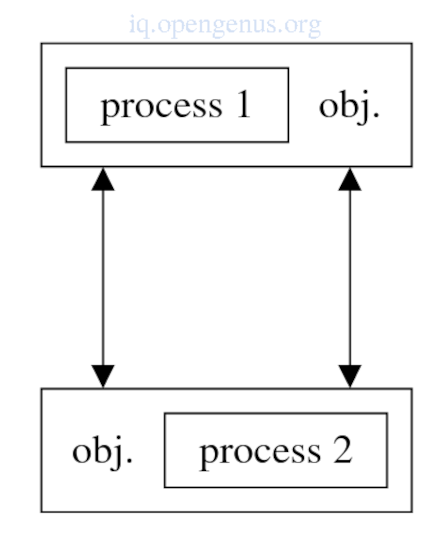 The key ideas in object oriented programming are encapsulation, polymorphism and inheritance.

Data encapsulated within an object can be only be accessed through operations/methods defined in the object.

OOP results in well-structured programs which can scale by the reuse of components.
These and many more advantages are just as important for parallel programming as for sequential thus the interest for parallel object oriented programming languages.
To implement parallelism we allow several objects to execute parallelly on different processors by letting a process execute inside the object.

Objects can invoke operations in another object's remote processors as a form of message passing.

Receiving objects can accept invocations implicitly or explicitly.
A process inside an object can consist of multiple threads of control.
A popular model is whereby one thread executes the main process of the object and additional threads are created for each invocation of an operation.
A monitor is used for synchronizing these threads. 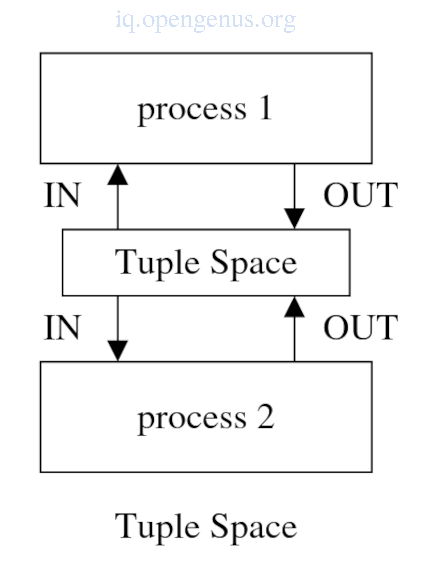 The code snippet in C/Linda will generate a tuple with 3 fields(string, integer, floating point number) and deposits it in the tuple space.

Read() and in() search for a tuple in the tuple space by specifying the actual parameter (an expression passed by the value) or a formal parameter(variable preceded by '?' passed by reference).

The code snippet specifies two actual parameters(string and integer) and a formal parameter(float) and tries to find a tuple T with three fields such that actual and formal parameters in the call have the same types and values as the corresponding tuple T fields.

If the above process, tuple matching, finds a tuple T, formal parameters in the call get values of the corresponding tuple fields of T and tuple T is removed from the Tuple space.

If more than one tuple exists, one is selected arbitrarily, if no matching exists, call to in() or read() is suspended until a process adds a matching tuple.

Tuple space primitives are indivisible operations in that if two processes simultaneously try to be in the same tuple, only one succeeds and the other will block.

For modification of a tuple, the tuple is taken out of the space, modified and put back which provides mutual exclusion synchronization in the tuple space.

An example of incrementing '4' in the previous tuple above

We remove the tuple from the tuple space.
Increment the tuple and put it back using the second statement. 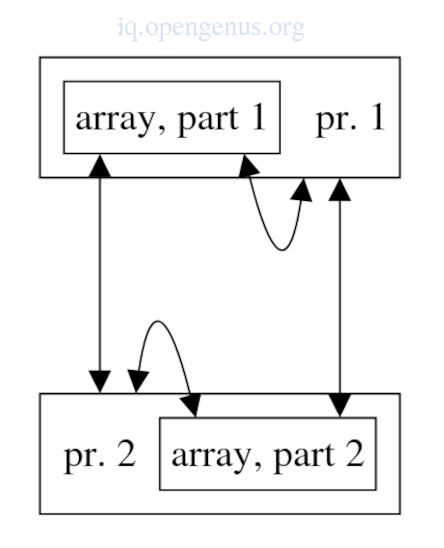 In data parallelism processors operate on different parts of the data set(usually and array) while executing the same algorithm.

Data parallelism is more restrictive, less flexible but easier to use since a single algorithm will be defined for all processors.
To approach this, the programmer will define what is to be executed parallelly and the compiler be left to distribute computations and data among different processors.

The parallel loop statement is the simplest explicit language construct used for data-parallel-programming.

The two outer loops are executed in parallel while the compiler will distribute the computations over the available processors.

Data-parallel program provide a simpler structure and therefore easier analysis by the compiler.

The goal of parallel systems is to solve a given problem as fast as possible by utilizing multiple processors e.g a distributed system that contains multiple autonomous processors connected by a network and work on multiple different tasks.
We have discussed five models for parallel programming which are shared variables, message passing, shared objects and tuple space and data parallelism

A compiler performs checks to ensure certain types of errors during programming are detected and reported, type checking will ensure the compiler follows the semantic and syntactic conversions of the source language.