Before we proceed further, we'll understand the task of object detection.

"Object detection is a computer technology, which is related to computer vision and image processing that deals with detecting instances of semantic objects of a certain class (like humans, buildings, cars or animals, etc.) in digital images and videos."

The task of object detection consists of two things - the first being Object Localization which is then followed by Object Classification. This is accomplished by predicting the co-ordinates of the bounding box along with the Class probabilities.

The input given is an image along with ground truth values of the bounding boxes.
The entire input image is divided into a square grid, the grid cell containing the center of the object is responsible for detecting that object. Each grid cell will predict B bounding boxes and the confidence scores associated with those boxes. This score indicates the accuracy of the box and how confident the model is that the box contains the object. Confidence score is IoU of predicted values and the ground truth values of the bounding box.

YOLOv4 is a SOTA (state-of-the-art) real-time Object Detection model. It was published in April 2020 by Alexey Bochkovsky; it is the 4th installment to YOLO. It achieved SOTA performance on the COCO dataset which consists of 80 different object classes.

YOLO is a one-stage detector. The One-stage method is one of the two main state-of-the-art methods used for the task of Object Detection, which prioritizes on the inference speeds. In one-stage detector models ROI (Region of Interest) is not selected, the classes and the bounding boxes for the complete image is predicted. Thus, this makes them faster than two-stage detectors. Other examples are FCOS, RetinaNet, SSD.

The first version of YOLO was written in the Darknet Framework (which is a high performance open source framework for implementing neural networks written in C and CUDA). DarkNet is typically a backbone network.

It divides the object-detection task into regression task followed by a classification task. Regression predicts classes and bounding boxes for the whole image in single run and helps to identify the object position. Classification determines the object's class.

The architecture consists of various parts, broadly they are - The input which comes first and it is basically what we've as our set of training images which will be fed to the network - they are processed in batches in parallel by the GPU. Next are the Backbone and the Neck which do the feature extraction and aggregation. The Detection Neck and Detection Head together can be called as the Object Detector.

And finally, the head does the detection/prediction. Mainly, the Head is responsible for the detection (both localization and classification). 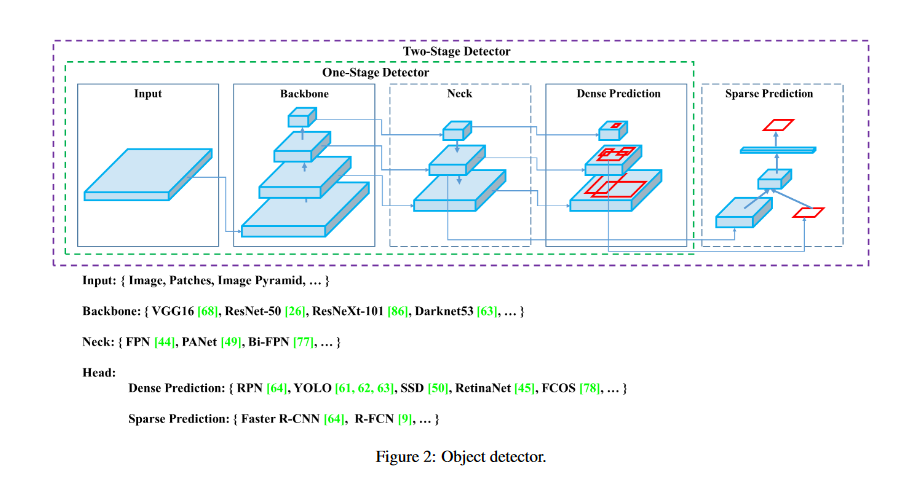 The sequence is as follows:

The authors initially considered CSPResNext50, CSPDarknet53 and EfficientNet-B3 as the backbone networks. Finally, after a lot of testing and experimental results they chose CSPDarknet53 CNN. (Page 7 of the paper titled "YOLOv4: Optimal Speed and Accuracy of Object Detection").

CSPDarkNet53 is based on the DenseNet design. It concatenates the previous inputs with the current input before proceeding into the dense layers - this is referred to as the Dense connectivity pattern.

Cross Stage Partial strategy splits the feature map in the base layer into two parts and merges them with the help of Cross-stage hierarchy, this allows for more gradient to flow through the layers and thus alleviates the infamous problem of "Vanishing Gradient".

The Convolutional Base Layer consists of the full-sized input feature map.

The CSP block which is stacked next to the Convolutional Base layer, divides the input into two halves as described previously, one half will be sent through the dense block, while the other half will be routed directly to the next step without any processing. CSP preserves fine-grained features for more efficient forwarding, stimulates network to reuse features and decreases number of network parameters. Only the final convolutional block in the backbone network which is able to extract richer semantic features is a dense block as more number of densely linked convolutional layers may result in a drop in detection speed.

The neck is the part where feature aggregation takes place. It collects feature maps from the different stages of the backbone then mixes and combines them to prepare them for the next step. Usually, a neck consists of several bottom-up paths and several top-down paths.

An additional block called SPP (Spatial Pyramid Pooling) is added in between the CSPDarkNet53 backbone and the feature aggregator network (PANet), this is done to increase the receptive field and separates out the most significant context features and has almost no effect on network operation speed. It is connected to the final layers of the densely connected convolutional layers of CSPDarkNet.

The receptive field refers to the area of the image that is exposed to one kernel or filter at an instance. As more convolutional layers are stacked, it increases linearly whereas it increases exponentially when we stack dilated convolutions and brings non-linearity.

Here's an overview of the operations performed: 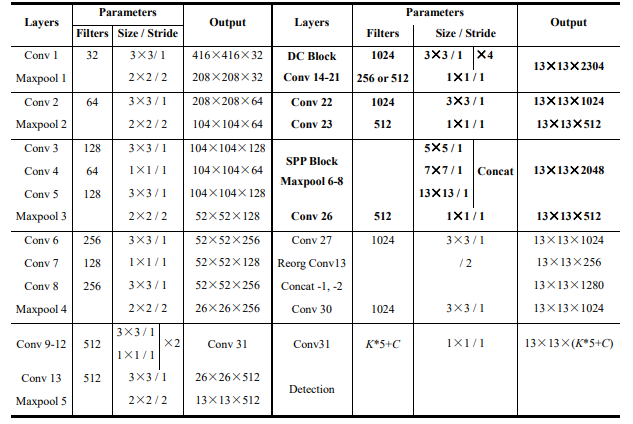 YOLOv4 uses a modified path aggregation network, mainly as a design improvement in-order to make it more suitable for training on a single GPU.
The main role of PANet is to improve the process of instance segmentation by keeping the spatial information which in turn helps in proper localization of pixels for mask prediction. Bottom-up Path Augmentation, Adaptive Feature Pooling & Fully-Connected Fusion are the important properties that make them so accurate for mask prediction.
Here the modified PANet concatenates neighbouring layers instead of adding when using the Adaptive Feature Pooling. 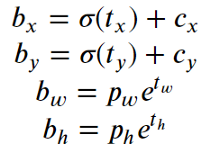 How the YOLO algorithm works has been discussed in the previous section.

Bag of Freebies (BoF): They improve performance of the network without adding to the inference time, most of which are data augmentation techniques. Data augmentation
helps create different variants of a single image, this makes the network more robust for prediction.

Mosaic Data Augmentation and Self-Adversarial Training (SAT) are the two main techniques introduced with this architecture.

Some of the important and significant features of BoF are explained below,

Mosaic Data Augmentation tiles four training images together, which helps the model in learning to find smaller objects and focus less on the surroundings which are not immediately next to the object. Another technique called Self-Adversial Training (SAT) obscures the region of the image the network most depends on to force the network to learn new features.

Cross mini-Batch Normalization is specifically introduced to enable training on a single GPU. As most of the batch normalization techniques leverage multiple GPU power.

DropBlock is a regularization technique to solve over-fitting. It drops a block of pixels. It works on Convolution layers, unlike pixel dropout which doesn't work on these layers.

Class label smoothing is a regularizer, it adjusts the target upper bound of the prediction to a lower value. This is again a measure to prevent the problem of over-fitting.
It's formula is

Mish Activation:
This activation function is used to push signals to left & right, which is not possible with functions like ReLU. Mish provides better emperical results when compared to ReLU, Swish & Leaky ReLU. Also various Data Augmentation techniques behave consistently with the use of Mish.

DIoU-NMS:
Non-Maximum Suppression (NMS) filters out other boxes and leaves put the one with the highest confidence score. This is implemented with the help of Distance IoU (DIoU) which takes into consideration the IoU values and distance seperation between the centre points of two bounding boxes when suppressing the reduntant boxes. This is ideal for the cases that have occlusion.

When compared to v3, YOLOv4 has an improvement in the mAP (Mean Average Precision) by 10% and in the FPS by 12% 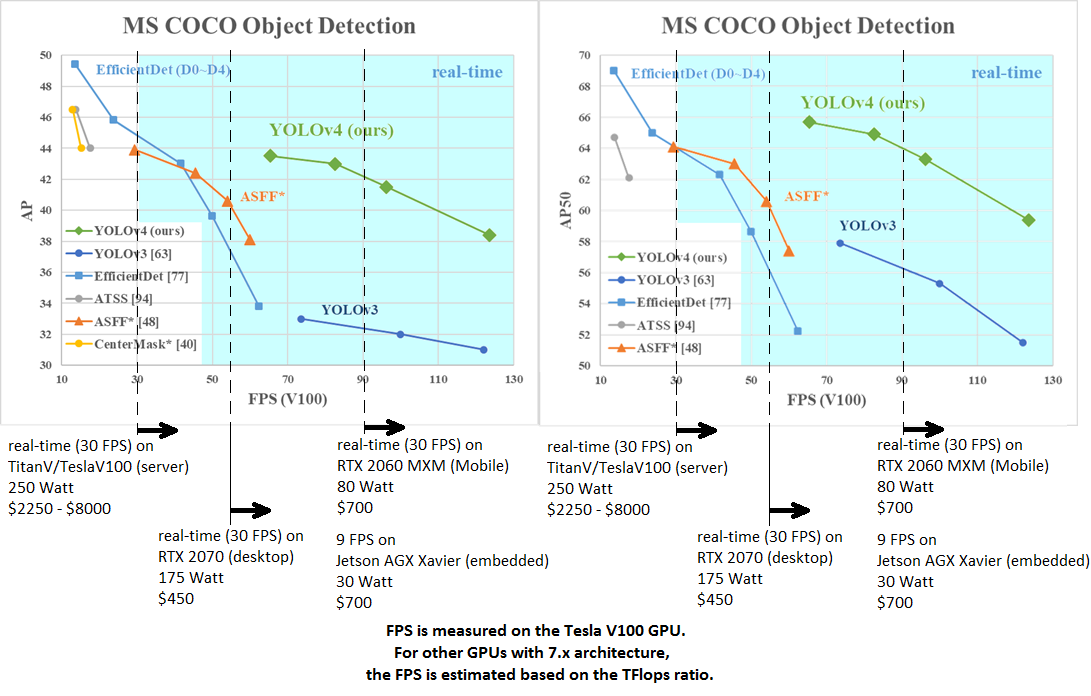 This improvement is brought by the inclusion of Bag of Freebies and Bag of Specials.

With this article at OpenGenus, you must have the complete idea of YOLOv4 model architecture.