In this article, we discuss intermediate representations and look at different approaches to IR while considering their properties.

An AST is usable as an IR if the goal is to emit assembly language without optimizations or transformations. 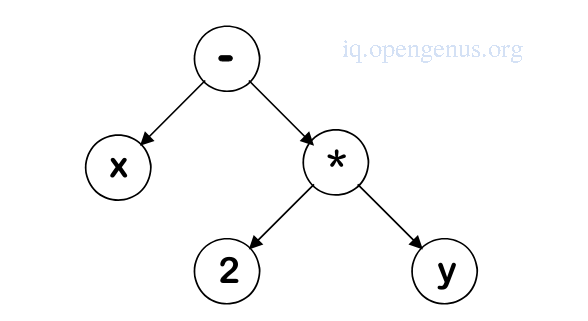 After type checking, optimizations e.g constant folding, strength reduction can be applied to the AST, then post-order traversal is applied to generate assembly language whereby each node of the tree will have corresponding assembly instructions.

In a production compiler, this is not great choice for IR because the structure is too rich, in that, each node has a large number of options and substructure e.g an addition node can represent either floating point or integer addition.

This makes transformations and external representations difficult to perform.

A DAG is an AST with a unique node for each value.

A DAG can have an arbitrary graph structure whereby individual nodes are simplified so that there is little auxilliary information beyond the type and value of each node. 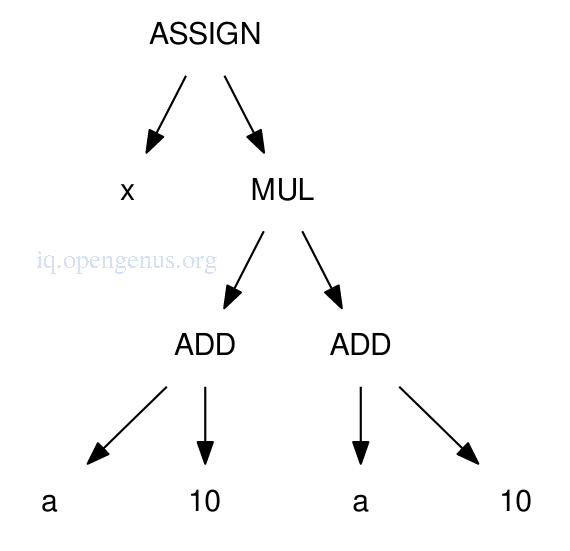 Additionally, this computation is performed once and this result can be used twice.

The DAG for the expression. 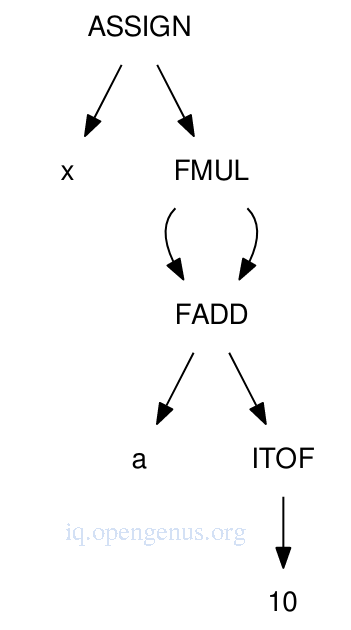 DAGs represent address computations related to pointers and arrays so that they are shareable and optimized whenever possible.
An example 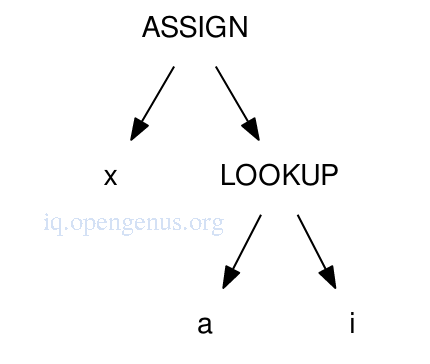 We add the starting address of array a with the index of the item i multiplied by the size of objects in the array(determined by symbol table).

The same lookup in a DAG. 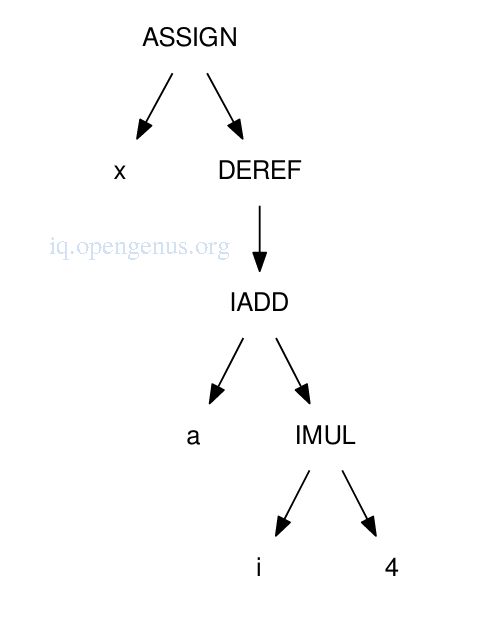 Before code generation, the DAG might be expanded so as to include address computations of local variables. e.g if a and i are both stored on the stack at 16 and 20 bytes past the frame pointer respectively, the DAG is expanded as shown below. 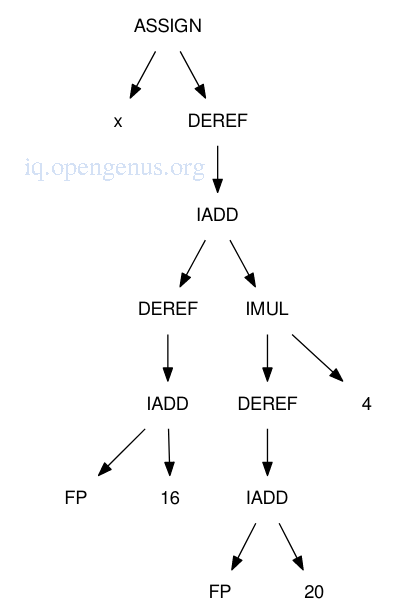 The value-number method can be used to construct a DAG from an AST by building an array where each entry consists of a DAG node type and array index of child nodes, such that each time we need to add a new node, we first search the array for a matching node and reuse it to avoid duplication.

By performing a post-order traversal and adding each element of the AST to an array we are able construct the DAG.

Value-number array representation of the DAG

As long as each expression has its own DAG, we can avoid a polynomial complexity when searching for nodes every time there is a new addition since absolute sizes will remain relatively small.

With DAG representation it is easier to write portable external representations since all information will be encoded into a node.

To optimize a DAG we can use constant folding where by we reduce an expression consisting of constants into a single value.

The algorithm works by examining a DAG recursively and collapsing all operators with two constants into a single constant.

A DAG can encode expressions effectively but faces a drawback when it comes to ordered program structures such as controlling flow.

In a DAG common subexpressions are combined assuming they can be evaluated in any ordering and values don't change however this doesn't hold when it comes to multiple statements that modify values and control flow structures that repeat or skip statements hence a control flow graph.

A control flow graph is a directed graph whereby each node will consist of a basic block of sequential statements.

Edges in the graph represent the possible flow of control between basic blocks.
Conditional constructs e.g if or switch statements, define the branches in the graph.

Looping constructs e.g for or while loops, define reverse edges. 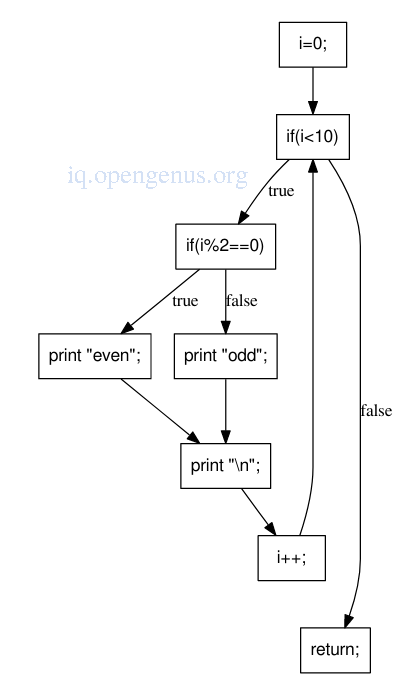 For the for loop the control flow graph places each expression in the order it would be executed in practice as compared to the AST which would have each control expression as an intermediate child of the loop node.

The if statements have edges from each branch of the conditional to the following node and thus it it easy to trace the flow of execution from a component to the next.

The idea is to define each name exactly once.

It is a common representation for complex optimizations.

It uses information from the control flow graph and updates each basic block with a new restriction e.g variables cannot change values and when a variable indeed changes a value, it is assigned a version number.

What if a variable is given a different value in two branches of a conditional? We introduce the phi ϕ-functions to make it work.

ϕ(x, y), indicates that either value x or y could be selected at run-time. This function might not translate into assembly code but serves as a link to the new value to its possible old values.

This is an ordered sequence of instructions that are closer to the final goal of an assembly language.

It looses DAG flexibility, but can capture expressions, statements and control flows within one data structure.

It looks like an idealized assembly language with a large/infinite number of registers and common arithmetic and control flow operations.

Linear IR can be easily stored considering each instruction is a fixed size 4-tuple representing the operation and arguments(max of 3).

Assume an IR with LOAD and STOR instructions to move values between memory and registers, and 3-address arithmetic operations that read two registers and write to a third from left to right.

At any given instruction we can observe virtual registers that are live.

The above makes instruction ordering easier since any instruction can be moved to an earlier position(within on basic block) as long as the values that are read are not moved above their definitions.

Also, instructions may be moved to later positions so long as the values it writes are not moved below their uses.

In a pipelined architecture, moving of instructions reduces the number of physical registers needed for code generation and thus reduced execution time.

This is a more compact version of IR designed to execute on a virtual stack machine without traditional registers except only a stack to hold intermediate registers.
It uses PUSH instruction to push a variable or literal onto the stack and POP instruction to remove an item from the stack and stores it in memory.

FADD and FMUL binary arithmetic operators implicitly pop two values off the stack and push the result on the stack.

ITOF unary operator pops one value off the stack and push another value.

COPY instruction manipulates the stack by pushing duplicate values onto the stack..

A post-order traversal of the AST is used so as to produce a stack machine IR given a DAG and emit a PUSH for each leaf value, an arithmetic instruction for each node and POP instruction which assigns a value to a variable.

Instructions in a stack machine

Assuming x is 5, executing thr IR would result in the following.

It is much more compact compared to a 3-tuple or 4-tuple representation since there is no need for recording register details.

Implementation is straight forward in a simple interpreter.

Every compiler or language will have its own intermediate representation with some local features.

Running a program with functional languages is seen as applying a function to the input which results in output. In this article we discuss functional programs from a compilers view point.