In this article, we discuss the third phase in compiler design where the semantic consistency of the code is validated.

This is the third phase in compiler design where by the semantics used in a program are validated to ensure correctness.
Semantic analysis involves a collection of procedures which are called at appropriate times by the parser as the grammar requires.
These semantics are clear and consistent with the way in which data types and controls structures are supposed to be used.

A semantic analyzer will use information stored in the syntax tree and symbol table to check the source program's semantic consistency according to the language definition.
The output of this stage is a representation of the program in either object code in the case of one pass compilers or intermediate representation of the program in the case of other compilers.

An example of semantic analysis;

In this case the integer 4 will be type-casted to 4.0 so that multiplication can occur.

The semantics of a language provide meaning to the language constructs such as its tokens and syntax structure.
Semantics can be either static or dynamic.

Static Semantics
These are the program semantics that don't change, they are declared before their and are checked at compile time.

Dynamic Semantics
These are semantics that live, move and exist during the runtime of the program.
They define the meaning of different units of a source program such as statements and expressions.

Semantic errors, also called logic errors are errors that arise when a statement used in a program is not meaningful, that is, it does not correspond the the set of rules(semantics) for that language being used.
These can be;

These are divide into 3 main categories which are base types, compound types and complex types.

Base types.
These are primitive types provided directly by the hardware such as int, float, double, char, bool.

Complex types.
These are abstract data types, a high level language may or may not support these types, in the case they are not supported, a programmer may opt to construct the needed type.
They include, lists, queues, trees, heaps, tables, stacks.

Types are stored in a symbol table before any type checking can occur.
When processing the program's header statement;
- The program's identifier is assigned the type program.
- The current scope pointer is set to point the the main program.
If the language allows user-defined data types, installation of these data types must have occurred in the symbol table entries for the declared identifiers.
These identifiers are then added to the abstract syntax tree.

Context free grammars deal with syntactic categories rather than specific words.
The declare before use rule requires knowledge which cannot be encoded in a CFG and thus CFGs cannot match an instance of a variable name with another.
Hence the we introduce the attribute grammar framework.

This is a context free grammar with rules and attributes.
It specifies values of attributes by associating semantic rules with grammar productions.

Type - these associate data objects with the allowed set of values.
Location - may be changed by the memory management routine of the operating system.
Value - These are the result of an assignment operation.
Name - These can be changed when a sub-program is called and returns.
Component - data objects comprised of other data objects. This binding is represented by a pointer and is subsequently changed.

These attributes get values from the attribute values of their child nodes.
They are defined by a semantic rule associated with the production at a node such that the production has the non-terminal as its head.

S is said to be a synthesized attribute if it takes values from its child node (A, B, C).

Parent node E gets its value from its child node.

These attributes take values from their parent and/or siblings.
They are defined by a semantic rule associated with the production at the parent such that the production has the non-terminal in its body.
They are useful when the structure of the parse tree does not match the abstract syntax tree of the source program.
They cannot be evaluated by a pre-order traversal of the parse tree since they depend on both left and right siblings.

Expansion.
This is when a non-terminal is expanded to terminals as per the provided grammar.

.Reduction..
This is when a terminal is reduced to its corresponding non-terminal as per the grammar rules.
Note that syntax trees are parsed top, down and left to right

This is a special case of context free grammar where additional information is appended to one or more non-terminals in-order to provide context-sensitive information.
We can also define it as SDDs without side-effects.
It is the medium to provide semantics to a context free grammar and it helps with the specification of syntax and semantics of a programming language.
When viewed as a parse tree, it can pass information among nodes of a tree.

The right side contains semantic rules that specify how the grammar should be interpreted.
The non-terminal values of E and T are added and their result copied to the non-terminal E.

An Example
Consider the grammar for signed binary numbers

We want to build an attribute grammar that annotates Number with the value it represents.
First we associate attributes with grammar symbols

Attribute grammar will consist of the following features;

These are a reduced form of a parse tree.
They don't check for string membership in the language of the grammar.
They represent relationships between language constructs and avoid derivations.

An example
The parse tree and abstract syntax tree for the expression a := b * c + d is. 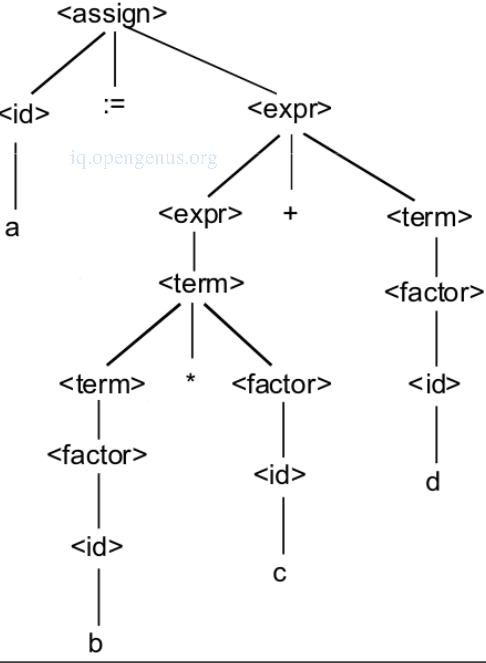 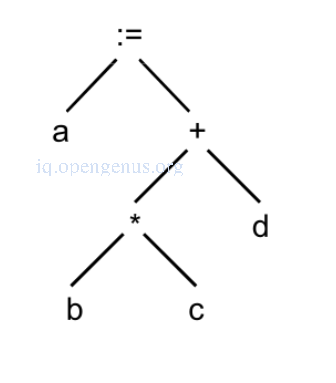 During this parsing there exist a separate function for each non-terminal in the grammar.
The procedures will check the lookahead token against the terminals it expects to find.
Recursive descent recursively calls procedures to parse non-terminals it expects to find.
At certain points during parsing appropriate semantic actions that are to be performed are implemented.

Roles of this phase.

A combination of per-processors, compilers, assemblers, loader and linker work together to transform high level code in machine code for execution. In this article we discuss the function of each part of this system.

In this article, we have explored the Noisy Neighbor problem and how Throttling pattern (a Cloud Design Pattern) can be used to resolve the issue.