In this article, we discuss the language processing system whereby high level code is fed into a series of programs which form a system to produce code that can be understood and executed by the processor.

This is a combination of programs such as preprocessors, compilers, assemblers, loaders and links which work together to convert source code written in a high level language such as java, c++ to executable target machine code.

Components of a language processing system.

The above directive will tell the preprocessor to insert/include contents of file into the program. With this the program is modified and expanded as if the included code had been written in the current file.
file inside the <> will inform the preprocessor to search for a file in the directory holding header files in the standard library.

"file" in this case will inform the preprocessor to look for the file in the current directory.

The above directive will inform the preprocessor to replace MAX with 0X86ff.

the above directive will remove the definition for MAX.

It is conventional to write symbols defined in preprocessor directives in upper case letters.

MIN is a macro that holds the value 234, before compilation, the preprocessor replaces MIN by 234 across the whole program.

4. Conditional compilation.
To compile a program conditionally, we can use #if or #ifdef or #ifndef.
An example

The above code will inform the preprocessor to place printf line into source code if the symbol DEBUG is defined otherwise it will exclude it.
With this we decide which part of source code to compile and which part to ignore.

The result of this stage is a compiler.

This is a program that reads a high level programming language(source code) and produces an equivalent low level target machine executable code which can be run against various inputs.
A compiler operates in logically interrelated phases whereby source code is translated from one representation and produces output in another representation.
Phases include;
Lexical Analysis: At this first phase the high level program is converted into a sequence of tokens.

Syntax Analysis: Statements, expressions and declarations are identified using the tokens from the previous phase. This phase is aided by programming language grammars. Syntax errors are reported incase they exist.

Semantic analysis: At this phase semantic consistency is validated and semantic errors can be produced if the code is not meaningful.

Intermediate code generation: In this phase an intermediate representation of the final machine code is produced.

Code generation: The optimized intermediate code is translated into assembly language for a specified machine architecture.

Error handling: At this stage, errors are detect and reported which will enable a programmer to debug a source program by determining where exactly the errors have occurred.

The output of this stage is object code or assembly language.

The above code instructs the processor to perform an addition of A and B where A, B are its operands.

There are two types of assemblers;
1. One pass assembler.
These assemblers will perform a conversion from assembly code to machine code in on pass hence the name one pass.

2. Multi-pass/Two-pass assembler.
These assembler use an opcode table and symbol table where values from the first pass will be stored.
Machine code is then generated in the second pass.

Differences between a compiler and assembler.

The output at this stage is machine code.

This is a program that will take a collection of objects which were created from the previous steps and combines them to produce and executable program.
To do this it will search for referenced modules/routines in a source program and find out their memory locations thereby making the program have absolute reference. 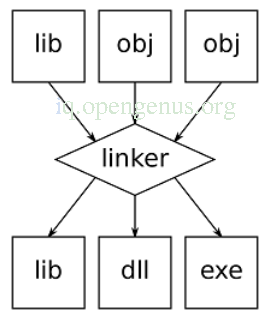 Linking can either be static or dynamic.

1. Static Linking
This is linking performed during compilation of source code whereby linking is performed before the execution of the program.
It is more portable since it doesn't not require libraries however It requires more storage and disk space as compared to dynamic linking.
It generates a fully linked object file that can be loaded and executed against inputs.
Tasks in static linking are;

2. Dynamic Linking.
This type of linking happens at runtime whereby multiple programs share a single copy of the library, that is, modules having the same object share information of an object with other modules with the same object. This eases on storage and disk space since object wont be repeatedly linked to same library.

Sharing can happen because the needed shared library will be held in a virtual memory which will help to reduce RAM used.

A draw back of dynamic linking is that there are increased chances of errors.

This is a program that will take input as object code from the linker and load it to the main memory.
This code is then prepared for execution by the machine.
It is responsible for loading programs and libraries to an operating system.

Functions of the loader.

Differences between linker and loader

From writing code in a high level programming language to compilation, asembling and linking the optimized code is now understandable to the machine are ready to be executed.

Int this article we discuss the lex, a tool responsible for translating a sequence of regular expressions given as input into a C implementation corresponding to a finite state machine.