An activation tree is a tree structure that represents function calls made by a program during execution. When a function is called a new activation record is pushed to the stack and popped from the stack when the function returns.

Language compilers that use procedures, methods, or functions as units of user-defined actions manage their run-time memory or at least part of it on the stack.
When a procedure is called, space is allocated(pushed) for it on the stack and when it terminates the space is popped off the stack.

We will come to see that this arrangement not only allows the sharing of space by procedure calls but also allows for the compilation of procedure code such that the relative addresses of its non-local variables are similar regardless of the procedure calls.

Coming back to stack allocation, it would not be possible if activations did not nest in time.

An example:
We have the program below. It reads nine integers into an array a then uses quicksort algorithm to sort them.

Looking at the main function, we see it has three tasks, the first is to call readArray, then set the sentinels, and finally call quicksort.

The image below shows a sequence of calls that may result from the execution of the program.
[image 1] 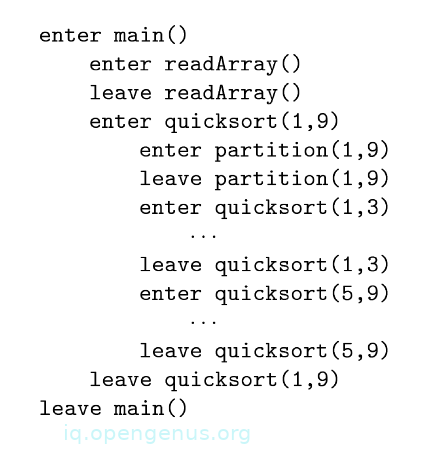 From the above, the call to partition(1, 9) returns 4 therefore a[1] to a[3] store elements that are less than its chosen separator value v, while the larger elements are in a[5] to a[9].

These activations are called from left to right and one child must finish before the right activation begins.

An example:
A possible activation tree that completes the call sequence and returns as can be seen from image 1 is shown in image 2(below). The first letters represent the first letters of functions.
The above tree is only a single possibility, this is because the arguments of subsequent calls and the number of calls along any branch are influenced by the values returned by the partition.

The relationship between the activation tree and the program behavior necessitates the use of a run-time stack.

The control stack is a run-time stack that manages procedure calls and returns. Each live activation has an activation record on this control stack with the root of the tree at the bottom of the stack and the rest of the sequence corresponding to the path in the tree.

We have the following activation tree that represents calls during the execution of quicksort.

The activation tree that represents calls during quicksort execution.
[image 2]

We show the control stack with the bottom of the stack higher than the top and therefore elements in an activation record that are the lowest are closer to the top of the stack.

As can be seen from the image 3, the contents of activation records differ with the language currently being implemented. 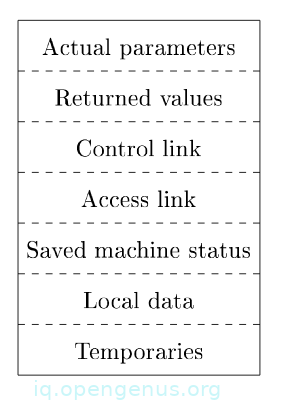 The above image shows the kind of data that might be stored in an activation record, below we explain each;

Storage for local variables is allocated on the run-time stack for languages allowing or that require variables to become inaccessible when their procedure terminate.

And at the top of the stack, we have the activation record of the latter.

Instruction selection involves choosing target-language instructions for each IR statement. In this article we discuss how it can be done by a tree-rewriting process whereby tree patterns that correspond to machine instructions are used to tile a syntax tree.

Dynamic programming not only applies to a broad class of register machines but its application results in the generation of optimal code that runs in linear time.