During the construction of the front end of a compiler, we implement statements using control flow. We translate the statements by inheriting a label next that marks the first instruction after the code for this statement.

In this article, we learn about control flow during the intermediate code generation phase of the compiler.

The use of boolean expressions is determined by the syntactic context, e.g, an expression that follows the keyword if alters the flow of control, while an expression on the right side is used to denote a logical value.

Such syntactic contexts are specified in several ways, we can use two different non-terminals, use inherited attributes, or set a flag during parsing.
We can also build a syntax tree then invoke different procedures for the two different uses of boolean expressions.

Boolean expressions comprise of boolean operators denoted by && - (AND), || - (OR), ! - (NOT).
Relational expressions are in the form of rel where and are arithmetic expressions.
We will consider boolean expressions generated using the following grammar.
B B || B | B && B | !B | (B) | E rel E | true | false

The attribute rel.op is used to indicate the operator represented by rel among the 6 comparison operators <, <=, =, !=, > or >=.
It is conventional to assume that || and && are left-associative and || has the lowest precedence, then && and finally !.

In a short-circuit code, boolean operators such as &&, ||, and ! translate into jumps. Instead, if the operators themselves appear in the code, the value of the boolean expression is represented by a position in the code sequence. An example is shown below;

The statement is translated into the following code segment;

In the above translation, the boolean expression is true if the control reaches label 2. If the expression is false, control goes to L1 skipping L2 and the assignment x = 0.

In this section, we consider the translation of boolean expressions into three-address code in the context of statements generated by the following grammar;

The translation of if(B) consists of B.code followed by .code as can be seen in the image below;
(1). 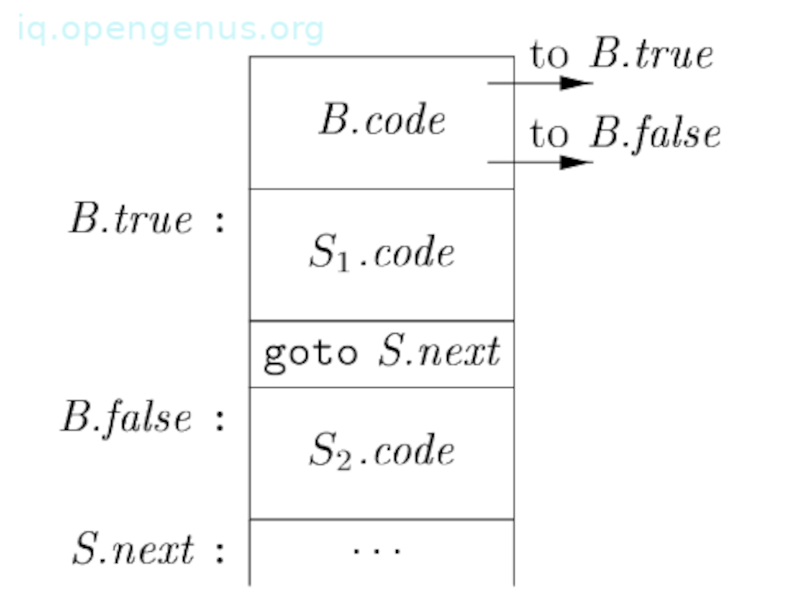 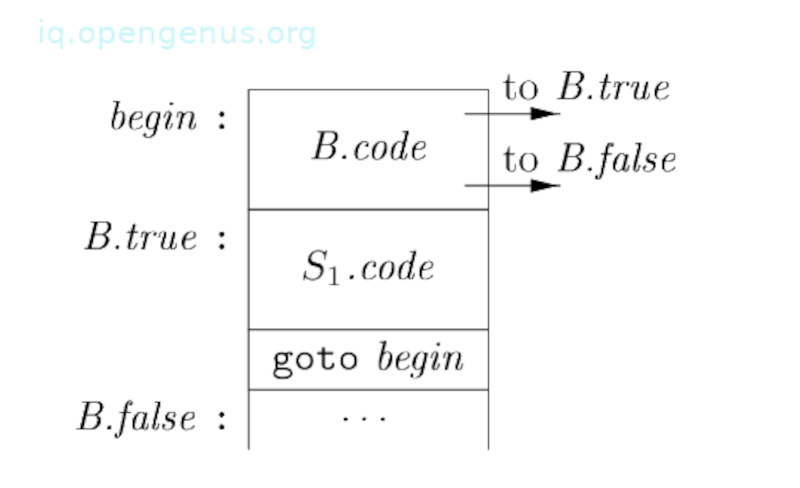 Inherited attributes are used to manage labels for B.code and S.code. With a boolean expression B, two labels B.true and B.false are associated with each other if B is false.
We use statement S to associate the inherited attribute S.next that denotes a label for the instruction immediately following the code for S.
In other cases, the instruction that follows S.code is a jump to another label L.
A jump to L from S.code is avoided using S.next.

We have the following Syntax-directed definition that produces a three-address code for boolean expressions in the context of if, if-else and while statements.
(4). 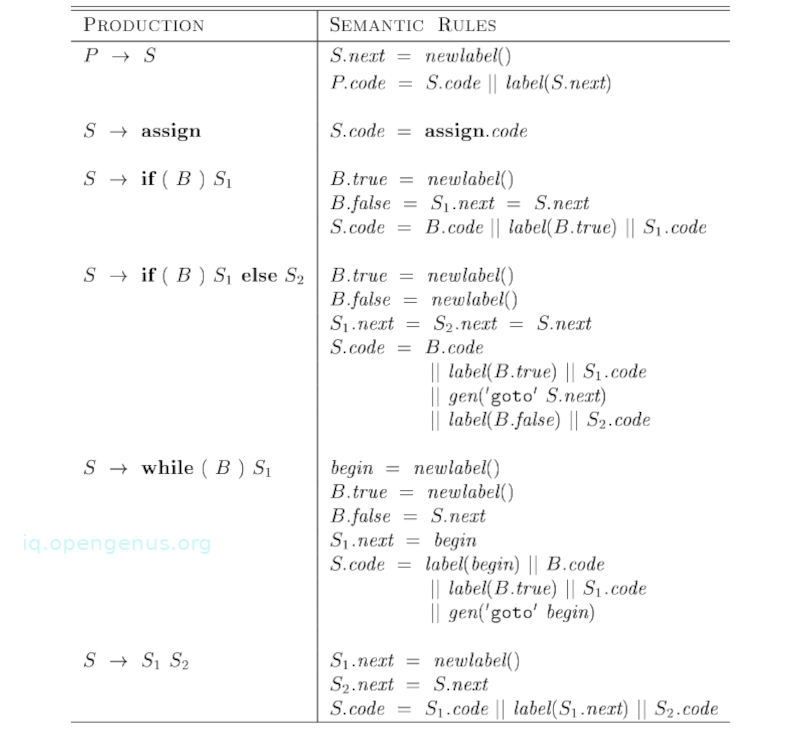 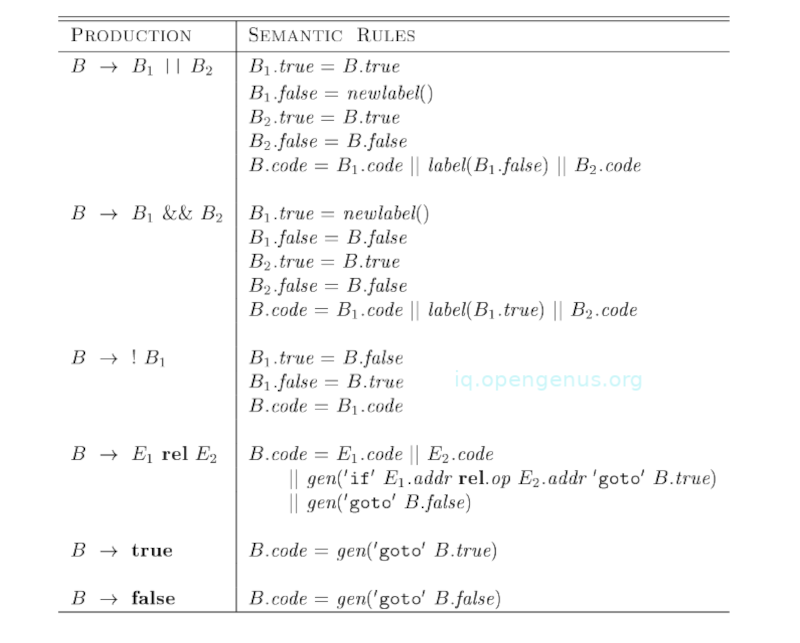 We have a program that consists of a statement that is generated by P → S. Semantic rules associated with this production initialize S.next to a new label.
P.code will consist of S.code which is followed by a new label S.next. assign in the production S → assign. This acts as a placeholder for the assignment statement.

In translating S → if(B) , semantic rules as shown in image (4) create a new label B.true then attach it to the first three-address instruction that is generated for .

By setting B.false to S.next, we make sure that control skips code for if B results in a false.

For translating S → while(B) , we form its code from B.code and .code. This is seen from image (3).
The local variable begin holds a new label that is attached to the first instruction for this while statement, which is also the first instruction for B.
A variable is preferred to an attribute since begin is local to the semantic rules for this production.
Inherited label S.next marks the instruction where control must flow to, that is, when B is false, therefore, B.false is set to S.next. B.true which is a new label is attached to the first instruction for . Code for B generates a jump to this label, that is, if B is true.
Following the code for , we place the instruction goto begin. This causes a jump back to the start of the code for boolean expressions. Keep in mind that .next is currently set to the label begin, therefore, jumps within .code can go directly to begin.

Semantic rules for boolean expressions in image (5) complement semantic rules for image (4). As we can see from the code layout in images (1-3), a boolean B is translated into three-address instructions that evaluate B using conditional and unconditional jumps to one of two labels, these are B.true and B.false, the former is B is true and the latter otherwise.

Now, we have the following 4th production for B → rel , is translated into a comparison three-address instruction with jumps to appropriate locations.
For example, if we have B with the form of a < b. It translates to;

For the other productions, we translate them as follows;

How to avoid redundant gotos.

From the if statement from section 3 (Short-Circuit code), the comparison x > 200 translates into the following;

The above ifFalse instruction takes advantage of the natural flow of instructions from one to the next in sequence and therefore control simply falls through to L4 if x > 200 and thus a jump is avoided.

From the code layouts from images 1, 2 and 3, the statement follows code for the boolean expression B. Using a special label fall which states, 'don't generate any jump', we adapt semantic rules from images 4 and 5 so as to allow control to fall through from the code for B to the code for .
The new rules for S → if(B) from image 4 set B.true to the label fall;

In a similar way, rules for if-else and while statements set B.true to fall.

Now, we adapt semantic rules for boolean expressions which allows control to fall through when possible. Given the following rules for B → rel ;
(6).

We generate two instructions as shown in image 5, if both B.true and B.false are explicit labels, meaning neither equals fall., Otherwise, if B.true is explicit then B.false must be fall and thus they generate an if instruction that lets control fall through if the condition is false.
Conversely, if B.false is explicit, then they generate an ifFalse instruction. In the last case, both B.true and B.false are fall, here no jump is generated.

Also, if evaluates to false, B's truth-value is determined by the value of and therefore rules from image 7 make sure that .false corresponds to control falling through from to the code for .

Also note that the semantic rules for B → && will be similar to those of image 7.

An effective way of handling both these roles of boolean expressions is to construct a syntax tree for expressions using one of the following approaches.

We have the following grammar that has a single nonterminal E for expressions;

We handle the two roles of expressions by using separate code generation functions. We assume that an attribute E.n denotes the syntax tree node for an expression E and that nodes are objects.
We have the method jump that generates the jumping code at an expression node and the method rvalue that generates code for computing the value of the node into a temporary.

When E appears in S → while(E) , the method jump is called at the node E.n. jump is implemented based on the rules for boolean expressions as can be seen from image 5.
By calling E.n.jump(t, f), jumping code is generated, here t represents a label for for the first instruction of .code and f represents the label for S.next.

In short-circuit code, boolean operators such as &&, ||, and ! are translated into jumps.

In this article, we learn about types and the storage layouts for names declared within a procedure or class which are allocated at run time when the procedure is called or an object is created.