In this article, we have explored the ideas in Genetic algorithms (like crossover, Simulated Binary Crossover, mutation, fitness and much more) in depth by going though a Genetic algorithm to reduce overfitting.

Given coefficients of features corresponding to an overfit model the task is to apply genetic algorithms in order to reduce the overfitting.

The overfit vector is as follows:

A genetic algorithm is a search heuristic that is inspired by Charles Darwin’s theory of natural evolution.

The implementation is as follows:

Each population contains multiple individuals where each individual represents a point in search space and possible solution.

The theoretical details of each stage are given here:

The idea is to give preference to the individuals with good fitness scores and allow them to pass there genes to the successive populations.

The idea is to insert random genes in offspring to maintain the diversity in population to avoid the premature convergence.

The first population is created using an initial vector where all genes are initialized to zero. Copies of this vector are made on which I mutate to generate a population of size POPULATION_SIZE.

The fitness of the population is an arithmetic combination of the train error and the validation error.

After the population is initialized, a mating pool is made (of MATING_POOL_SIZE) containing the best fitness parents.

Then parents are uniformly chosen from the mating pool as follows:

A Simulated Binary Crossover is then performed on the parents to generate an offspring.
This is followed by mutation of chromosomes, details of which are given here.

This process is repeated and the values are stored in a JSON file from which I read the next time I commence.

As you can see the code is vectorized and completely modular as separate functions have been written for each significant step. 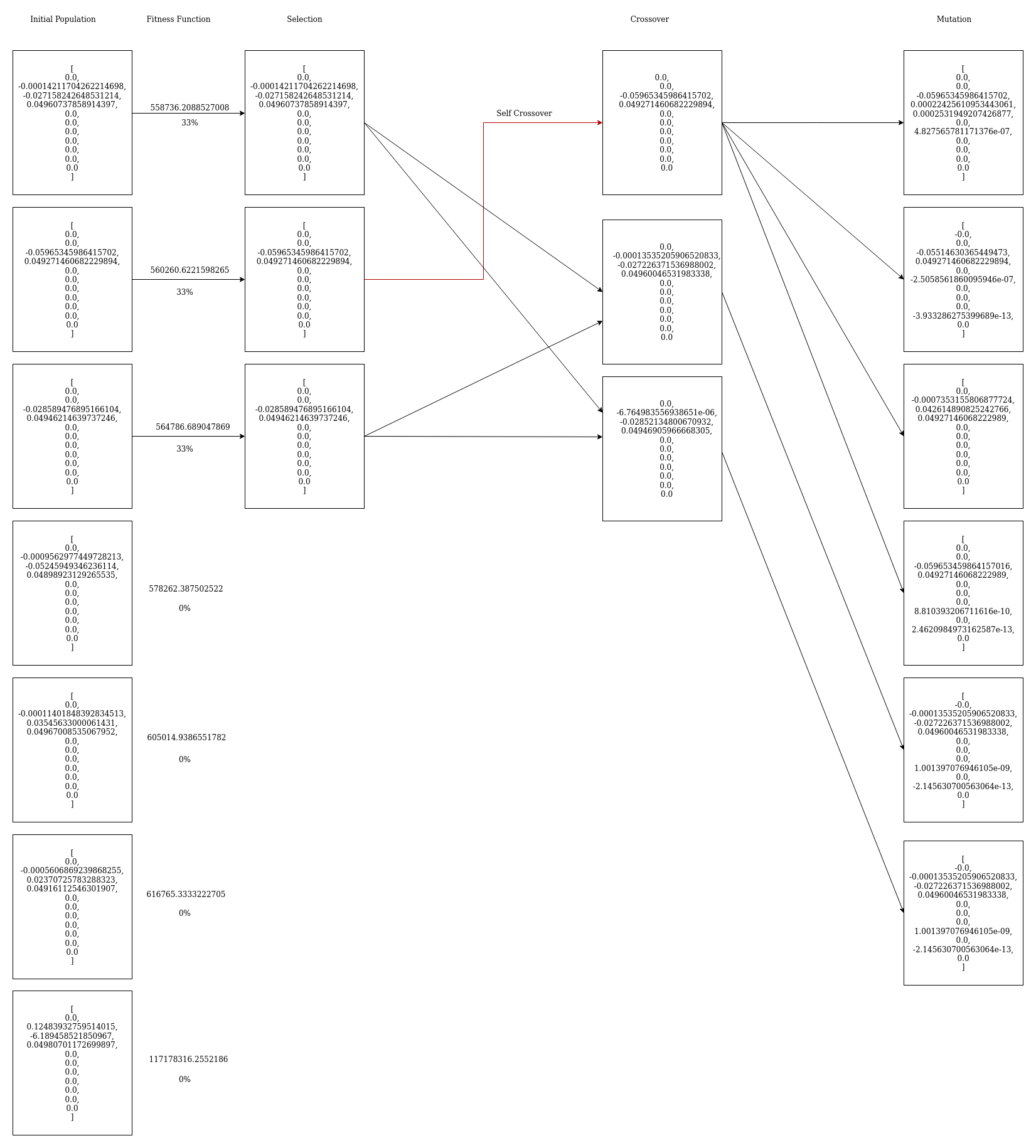 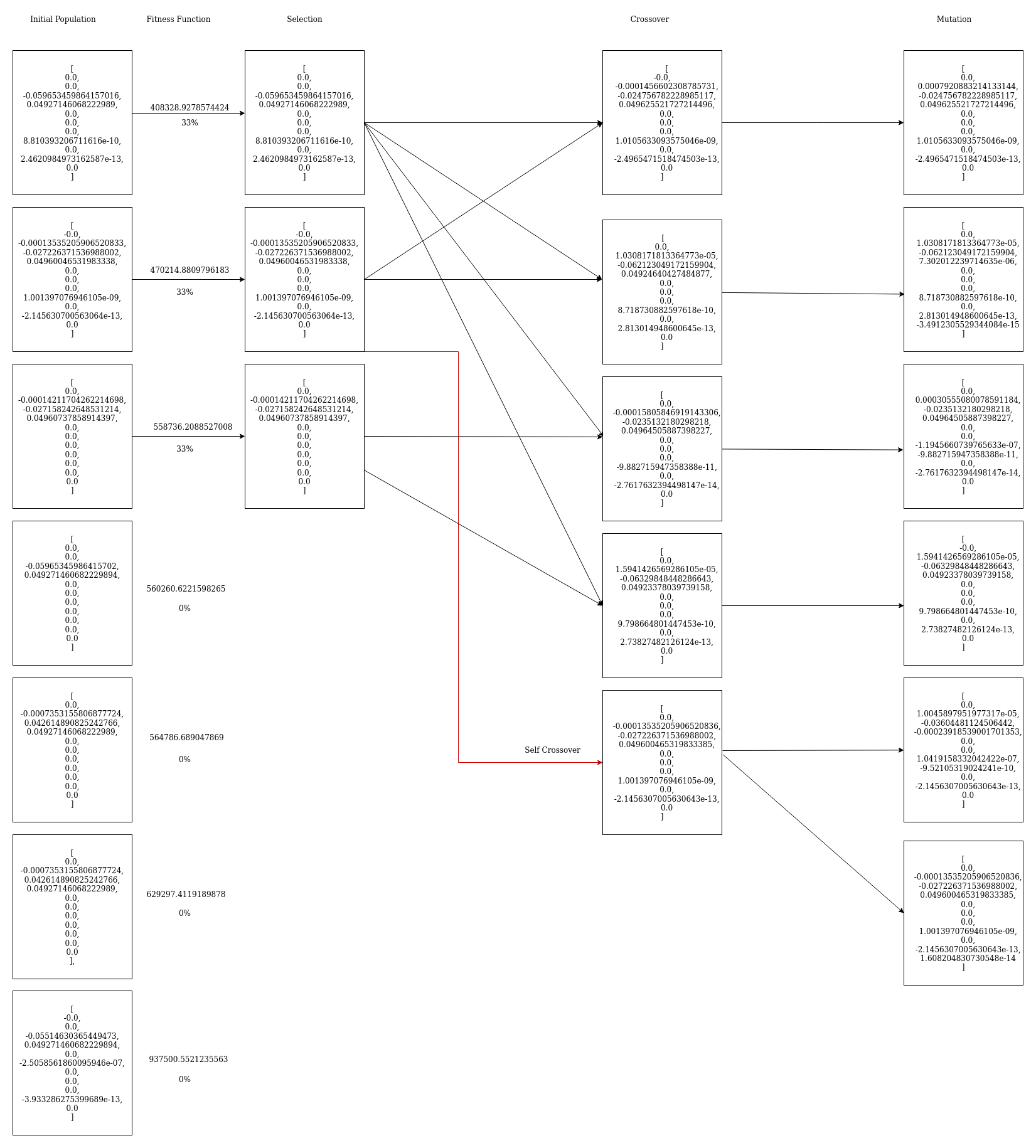 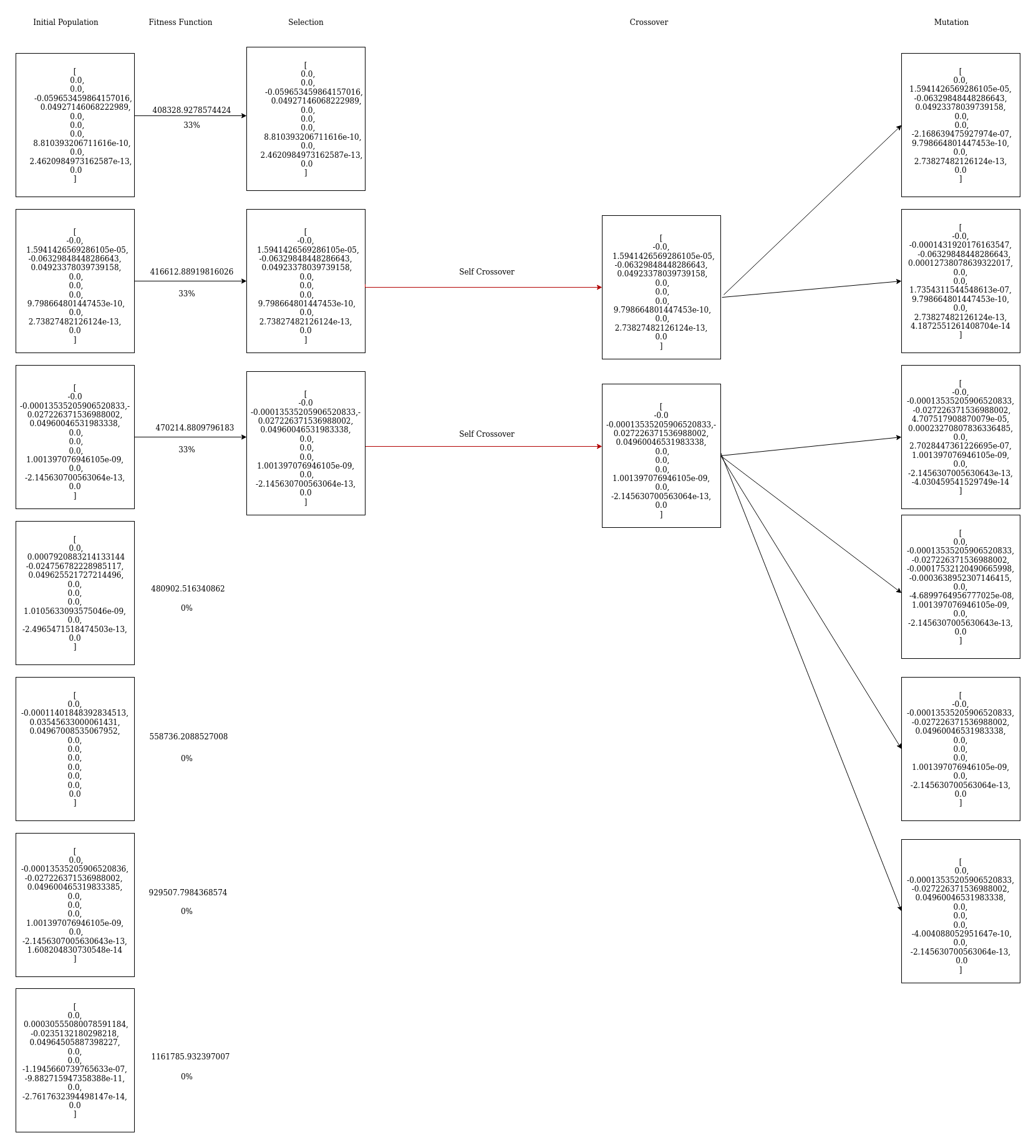 At first, I used the overfit vector as the initial vector to create our initial population. .

However, even after running the GA many times with different variations, I got stuck at a local minima (errors stopped improving).

So I decided to bring in some randomization in our initial vector.

I tried many things and at one point even initialized each gene of the vector with a random number between (-10, 10) . However, I soon realized that this would not work as the search space would become huge and convergence time too large.

I had to apply heuristics for our choice of initial vector

I noticed that many genes were of lower orders such as 1e-6, 1e-7.., 1e-12 and so on. Hence, I initialized all genes of the first vector to 0 during our trial and error process.

I applied mutations to this that were equivalent to some factor multiplied by the overfit vector value at that index. This would increase our probability of reaching a global minima.

Voila!
Our heuristic worked as the fitness dropped to 600K in the very first run! When I started with overfit vector, the least it reached was 1200K.

In the fitness function, get_errors requests are sent to obtain the train error and validation error for every vector in the population.

The fitness corresponding to that vector is calculated as

I changed the value of the train_factor from time to time, depending on what our train and validation errors were for that population. This helped us achieve a balance between the train and validation error which were very skewed in the overfit vector.I kept changing between the following 3 functions according to the requirement of the population (reason for each function mentioned below).

The fitness function now became a simple sum of train and validation error.

This was done when the train error became significantly large. At this point, I wanted to balance both errors and wanted them to reduce simultaneously so I set the fitness function as their simple sum.

Initially, I implemented a simple single point crossover where the first parent was copied till a certain index, and the remaining was copied from the second parent.

However, this offered very little variations as the genes were copied directly from either parent. I read research papers and found out about a better technique (described below) that I finally used.

The entire idea behind simulated binary crossover is to generate two children from two parents, satisfying the following equation. All the while, being able to control the variation between the parents and children using the distribution index value. 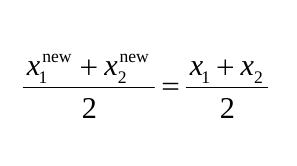 The crossover is done by choosing a random number in the range [0, 1). The distribution index is assigned its value and then $\beta$ is calculated as follows:

Distribution index that determines how far children go from parents. The greater its value the closer the children are to parents.

The distribution index is a value between [2, 5] and the offsprings are calculated as follows:

The code is as shown:

I varied the Distributed Index value depending on the population.

Our mutations are probabilistic in nature. For the vector, at every index a mutation is decided to be performed with a probability of 3/11.

I scale the value at an index by randomly choosing a value between (0.9, 1.1) iff the value after scaling is within the valid (-10, 10) range. The following code does that:

The POPULATION_SIZE parameter is set to 30.
We initially started out with POPULATION_SIZE = 100 as we wanted to have sufficient variations in our code. But, we realized that was slowing down the GA and wasting a lot of requests as most of the vectors in a population went unusued. We applied trial and error and found 30 to be the optimal population size where the diversity of population was still maintained.

The MATING_POOL_SIZE variable is changed between values of 10 and 20.
We sort the parents by the fitness value and choose the top X (where X varies between 10 to 20 as we set it) that are selected for the mating pool.

Number of parents passed down to new generation

We varied this variable from 5 to 15.

This parameter was applied in the Simulated Binary Crossover. It determines how far children go from parents. The greater its value the closer the children are to parents. It varies from 2 to 5.
We changed the Distribution Index value depending on our need. When we felt our vectors were stagnating and needed variation, we changed the value to 2, so that the children would have significant variations from their parents. When we saw the errors decreasing steadily, we kept the index as 5 so that children would be similar to the parent population, and not too far away.

We varied our mutation range drastically throughout the assignment.

Number of iterations to converge

It took 250 generations to converge when we tried with the overfit vector. The error reduced to 1.31 million total. However, we restarted after reinitializing the initial vectors as all 0s because we could not get out of this local minima.

It took 130 generations to converge. Generation 130 has validation error as 225-230K and train error around 245K for most of the vectors.

trace.json contains the trace of the output for 10 generations.

The format is as follows,

As 8 parents are brought down to new generation, the last 8 children (when sorted by fitness) are not included in the new population for the next generation.

I believe this could be the vector on the test server as this is a vector from one of our last populations and has the best validation error I ever saw. It also has a low train error meaning it generalizes well. It is one of the vectors I submitted on the day I got the improved result.

With this article at OpenGenus, you must have a good idea of Genetic Algorithms. Enjoy.

In this article, we have developed an online compiler in Node.JS. We have demonstrate the ideas involved and the steps in developing this application in detail.

Given a string, we are required to find the longest palindromic substring. In this article, we have solved this problem using palindromic tree.