In this article, we discuss the second phase in compiler design where written code is evaluated for correctness.

Parse tree/syntax tree - This is a hierarchical representation of terminals and non-terminals.
Syntax error - This is an incorrect construction of source code.
Sentinel - Given a grammar G with start symbol S, if S -> alpha, where alpha may contain terminals or non-terminals, Alpha is referred to as the sentinel form of G.
Yield/Frontier of a tree - This is the sentinel form in the parse tree..
A parser is a program that takes in an input string and produces a parse tree if the input string is valid or an error message indicating that the input string is invalid.
A derivation is a sequence of production rules useful to get the input string.

This phase will it determine whether the input given is correctly written in the programming language used to write it.
A derivation process will try to produce the input string, if the input can be reproduced then it is valid otherwise an error(syntax error) is reported back to the syntax analyzer.

Actions during this phase.

The parser determines syntactic validity of an input and builds a tree which is used by subsequent phases of the compiler.

This is a set of recursive rules used to generate patterns of a string.
They are used to describe programming languages and to generate parsers automatically in compilers.

To generate context free languages, they take a set of variables which are defined recursively by a set of production rules.

L(G) is the language generated by G which is a set of sentences.
A sentence L(G) is a string of terminal symbols of G.
If S is the start symbol of G then w is a sentence of L(G) iff s => w, where w is a string of terminals of G.
If G is a context free grammar then L(G) is a context free language.
Two grammars G1 and G2 are equivalent if they produce the same grammar.
Given a production S => a
If α contains non-terminals it is referred to as a sentential form of G, otherwise it is called a sentence of G.

Left-most derivation.
The input is scanned and replaced from left to right. A left-sentential form is derived from this derivation.

Right-most derivation.
The input is scanned and replaced from right to left. A right-sentential form is derived from this derivation.

This is a graphical depiction of a derivation.
In a parse tree;

A grammar that produces more than one parse for a sentence is said to be ambiguous grammar.

An example.
Given the ambiguous grammar G: stmt →if expr then stmt | if expr then stmt else stmt | other
Using the string if E1 then if E2 then S1 else S2
We have the following parse trees for the left-most derivation 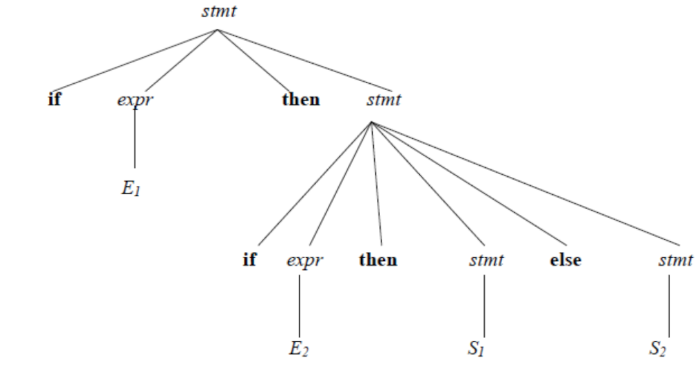 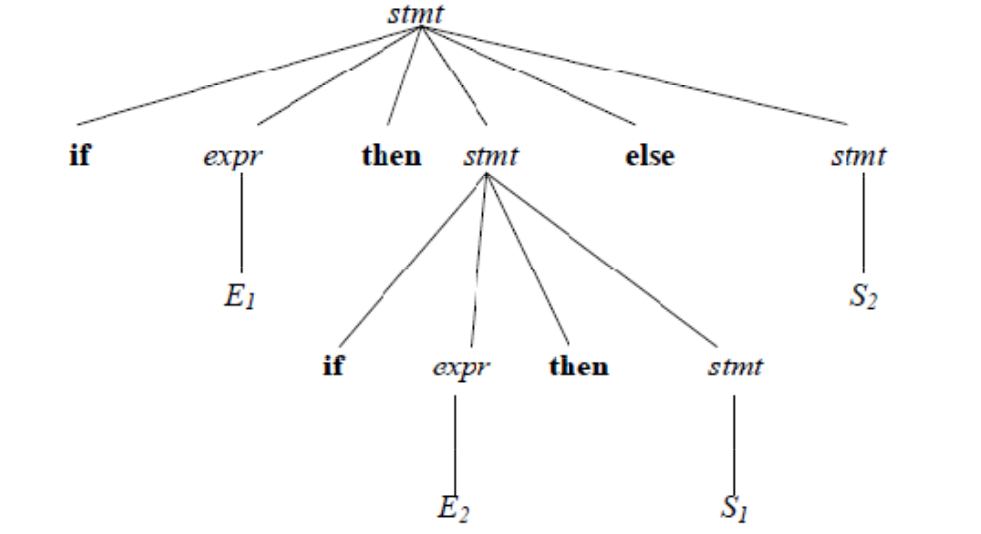 A grammar with a non-terminal A such that there exists a derivation
A => Aα for some string α is said to be left recursive.

Elimination left recusion.
If there is a production A → Aα | β, replace it with a sequence of two productions A → βA’ and A’ → αA’ | ε without changing the set of strings derivable from A.

This is removing common left factors that appear in two productions of the same non-terminal to avoid back-tracking by the parser.
Grammar produced is suitable for predictive parsing.
When it is not clear which alternative productions to use to expand a non terminal A, we rewrite the A-productions to defer the decision until enough of the input has been seen to make the right decision.

Here we try to get the left-most derivation for an input string.
It is categorized into;

and an input string read.

The top-down parser will construct a parse tree in the following steps. 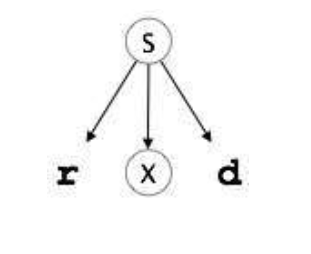 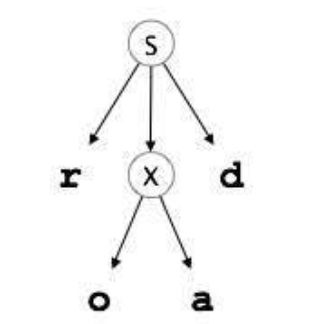 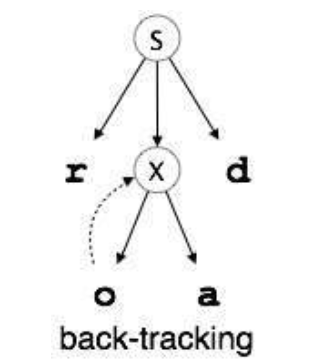 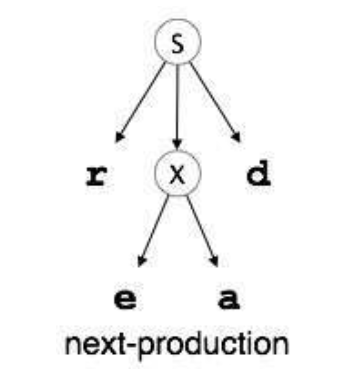 This is a special case of recursive descent parsing where no back-tracking is required.
This is achieved by eliminating left recursion and performing left factoring which will remove the need for backtracking in most cases.
Look ahead pointer is also used to point to the next input symbols.
It faces the problem of trying to determine the production to be applied for a non-terminal in case of multiple alternatives.

The input buffer consists of strings that are to be parsed, The $ is used to denote that the input is consumed.
Stack data structure will contain a sequence of grammar symbols. The $ is used to denote the bottom of the stack.
The parsing table is a 2D array T[A, a] where 'A' is a non-terminal and 'a' is a terminal. It is used as a reference by the parser for making decisions on the input and stack element combination.
The stack and table are used to generate the parse tree.

An Example.
Given a string w and a parsing table M for a grammar G.

The parser will initially have $S on the stack with S, the start symbol of G on top and w$ in the input buffer.
A parse for the input is produced as follows;

set ip to point to the first symbol of w$.

The output is a left-most derivation of w, otherwise an error is produced.

The construction of a parsing table is aided by two functions associated with a grammar G.
These are the first and follow sets.

The first set is created to know the terminal symbol derived in the first position by a non-terminal.

Rules for first set are,

FOLLOW(A), for a non-terminal A is the set if terminals a that can appear immediately to the right of A in a sentinel form.
That is, the set of terminals a such that there exists a derivation of the form S =>xαAaβ for some α and β 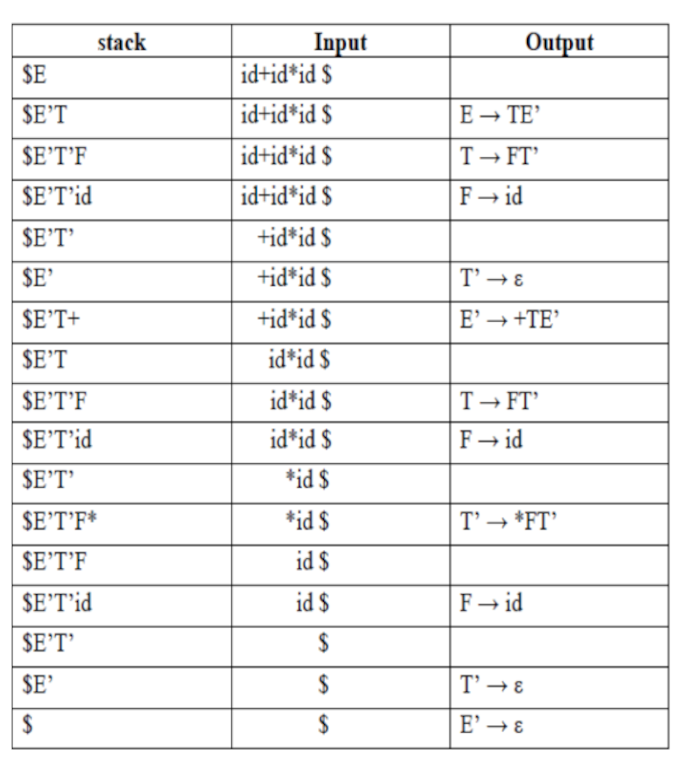 This is grammar is context-free grammar whose parsing table will not have
multiple entries.
L -> scanning input from left to right
L -> the second L is for production of the left-most derivation.
1 -> Use of only one input symbol for lookahead at each step for parsing decision making.

Which of the two productions is feasible for LL(1) parser?

Actions of predictive parser involve;
Shift - next input symbol is shifted to the top of the stack
Reduce - handle within the stack is replaced with a non-terminal
Accept - parsing completes successfully.
Error - a syntax error occurs and error recovery is initiated.

This is the construction of a parse tree for an input string starting from the leaves(bottom) to the root(top).
A shift-reduce parser is a type of a bottom up parser.

Actions of predictive parser involve;
Shift - next input symbol is shifted to the top of the stack
Reduce - handle within the stack is replaced with a non-terminal
Accept - parsing completes successfully.
Error - a syntax error occurs and error recovery is initiated.

This is an efficient way of constructing a shift-reduce parser.
An Operator-grammar is a grammar used to define mathematical operators, they have the property that no production has either an empty right hand side(null productions) or two adjacent non-terminals in its right hand side.
An operator grammar is used for the construction of an operator precedence parser.

The right side has three consecutive non-terminals, that is EAE, therefore the grammar is written as

This parsers implement an efficient bottom-up syntax analysis used to parse a large class of CFGs(LR(k)) parsing.
L -> left to right scanning
R -> construction of the right most derivation in reverse
k -> represent the number of input symbols.

With this article, you must have a strong idea of Syntax Analysis in Compiler Design.

In this article, we discuss two compiler optimizations (Constant Folding and Constant Propagation) which enable the compiler to produce high performance and efficient assembly code.

In this article, we have explained the concept of Xavier Initialization which is a weight initialization technique used in Neural Networks.