In this article, we discuss the different types of Parsing done by compilers such as Top-down parsing, Non-recursive predictive parsing and much more.

Parsing or (syntax analysis) is the process of analyzing text containing a sequence of tokens to determine its grammatical structure with respect to grammar.

We shall be discussing the two commonly used parsing techniques, that is top-down and bottom-up parsing.

The different types of Parsing techniques in Compiler are:

Top-down parsing is divided into the following sub-categories;

It is one of the simplest parsing techniques used in practice. It constructs the parse tree in a top-down manner.
The basic idea is to associate each non-terminal with a procedure that reads a sequence of input characters that can be generated by the corresponding non-terminal and return a pointer to the root of the parse tree for the non-terminal.
These procedures are recursive in nature.
A non-terminal of the current derivation step is expanded using the production rule in the given grammar.
If an expansion doesn't give the desired result the parser will drop the current production and applies another production corresponding to the same non-terminal symbol (backtracking).
The process is repeated until the required result is obtained.

To derive the string cad, 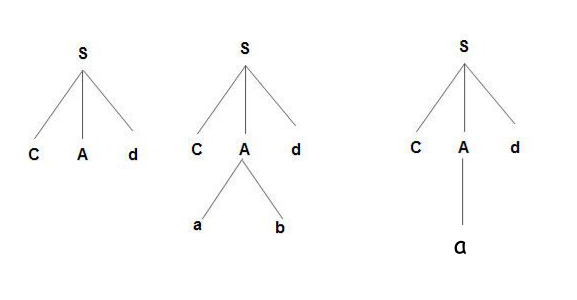 It is an implementation of the predictive parser that solves the problem of determining the production to be applied for a non-terminal by implementing an implicit stack and parsing table.

It looks up the production to be applied in a parsing table constructed from a certain grammar.

Therefore for the construction an predictive parser we must know;

E.g;
Given the productions:
stmt -> if expr than stmt else stmt
| while stmt than stmt
| begin stmt_list end

Then the keywords if, while, begin, tell us which alternative could possible succeed if we are to find a statement.

Input buffer.
Contains strings to be parsed followed by a $ symbol to indicate the end of input string.

Stack.
Contains a sequence of grammar symbols (terminal and non-terminal) with # or $ indicating the bottom of the stack.

Parse Table.
A 2D array M[A, a] where A is a non-terminal and a is terminal of symbol $. 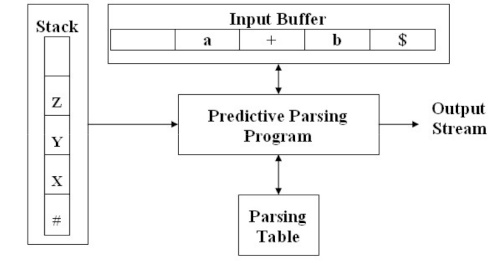 Let X be the symbol at the top of the stack and a the current symbol
If X = a = $, the parser halts and announces the completion of a successful parsing.

POP.
If X = a is not equal to $, X is popped from the stack and the parser advances the input pointer to the next input symbol.

Apply.
If X is non-terminal it is popped from the stack.
The parser consults the parsing table M[A, a].
The entry will either be an X-production of the grammar or an error entry.
If, for example, M[X, a] = {X -> UVW}, the parser will replace X on top of the stack with WVU, with U on top of the stack.

Rejects.
If M[A, a] = error, an error recovery routing will be called.

Construction of a non-recursive predictive parser is aided by the following two functions, FIRST and FOLLOW, which allow filling in entries of a parsing table for grammar G when possible.
We need FIRST and FOLLOW sets for a given grammar so that the parser can properly apply the needed rule at the correct position.

FIRST
If the compiler would have come to know in advance, the "first character of the string produced when a production rule is applied" and compare it to the current character or token in the input string, then it can wisely take decision on which production rule to apply.

FOLLOW
FOllOW can make a non-terminal vanish if needed to generate the string from the parse tree.
Consider the grammar below
A -> aBb
B- > c | ∈
Suppose the input string is "ab".

The parser applies the first rule A -> aBb because the first character in the input is a,
It checks for the second character of the input string which is b and the non-terminal to derive B.
It cant get any string derivable from B that contains b as its first character.
But then the grammar contains a production rule B -> ∈ which when applied, B will vanish and the parser will get the input "ab".
The parser can only apply it when it knows that the following character after B in the production rule is same as the current character in the input.
In RHS of A->aBa, b follows non-terminal B i.e (FOLLOW(B) = {B}) and the current input character read is also b therefore the parser will apply this rule and it will be able to get the string "ab" from the given grammar.

LR -> L stands for left-to-right scanning of the input and R is for right most derivation and only one non-terminal expanded at each step.

This is the process of reducing a string to the start symbol of a grammar.
It uses a stack to hold the grammar and an input tape to hold the string.

Stack.
Used for storage and access of the production rules.

Shift.
The current symbol of the input string is pushed onto the stack.

Accept.
A parsing action is called accept when the start symbol is present in the stack and the input buffer is empty therefore which means successful parsing.
The parser will announces successful completion of parsing.

Error.
Whereby the parser can not perform shift, reduce or accept actions due to a syntax error.
An error recovery routine is called.

Also know as LR(k) parsing where
"L" stands for left-to-right scanning of the input.
"R" stands for the construction of the right most derivation in reverse.
"K" stands for the number of input symbols of the look ahead used to make number of parsing decisions.
This is non-recursive shift-reduce, bottom-up parsing.
It is used to parse a large class of grammars therefore making it the most efficient syntax analysis technique.
The sub categories of LR parsing are;

We shall give in short summaries of the above and links at the reference section for further reading.

It is similar to LR(0) parser but works on a reduced entry.
It has few number of states hence very small table.
It is has simple and fast construction.

It is the Look ahead LR parser.
Works on an intermediate size of grammar.
It can has the same number of states as the SLR(1).

Refers to canonical look ahead.
It uses the canonical collection of LR(1) to construct its parsing table.
It has more states compared to SLR parsing.
In this type of parsing the reduced node is replaced only in the lookahead symbols.

It is a kind of shift-reduce parsing applied to a small class of operator grammars.
A grammar is said to be operator precedence if;

With this article at OpenGenus, you must have the complete idea of Parsing in Compiler Design.