Before we get started, we discuss some prerequisite concepts we have to be familiar with. These are short summaries enough to give a background on Li chao trees, it is advisable to understand these concepts in depth so we have provided references in the references section.

A segment tree is a binary tree used to store intervals or segments, that is, each node in the segment tree represents an interval.

It allows answering range queries over an array effectively while still being flexible to allow modification of the array.

It can solve problems such as finding the sum of consecutive array elements arr[l,...,r] or finding the minimum element in such a range(Range minimum query) in O(logn) time.

We first create/build the structure of the segment tree and initialize it.

This is a technique to efficiently determine which members of a set of linear functions in one variable attains an extremal value for a given value of the independent variable.

In other words, it finds the maximum or minimum value of several convex functions at given points.

It works for the following recurrences

There are n cities.

You want to travel from city 1 to n by car.
You have to buy gasoline.

A liter of gasoline costs in the city.
Your fuel tank is initially empty and you spend 1 liter of gasoline per kilometer.
Cities are located on the same line in ascending order with the city having coordinate .

Additionally you have to pay to enter city.
You are required to make the trip with the minimal possible costs.

As you can see we have an optimal substructure and overlapping subproblems(dynamic programming).

Therefore we have the following recurrence;

The idea is to maintain a lower convex hull of points (k;b) on a plane such that we have to find the point which has the least dot product with a given point (x;1), that is, for this point, kx+b is minimized.
Such a minimum will be on the lower convex envelope of these points as shown below. 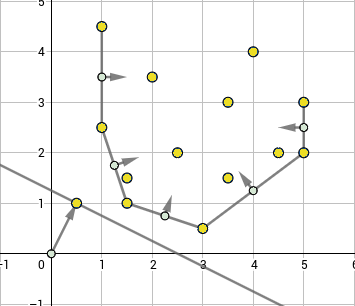 We maintain the following invariant

Note: Li chao trees can be made persistent and are faster compared to the convex hull trick in practice.

Given a set S containing functions with a transcending property of the same type e,g; (lines, y = ax + b).

We need to handle two types of queries;
1: Add a function to set S.
2: Answer the maximum or minimum value at x = t considering all functions in S.

Given a node and coefficients of a line a, b, we want to insert to tree.
We take the following steps;

If node is null, we return a new node with the new line.
We initialize the intervals and the mid values.
We make a comparison between the current line and line in the tree, if current is better we swap the two lines, otherwise we keep it.
We compare the left values for both lines, if greater we go to the left child otherwise we go to the right child.

The time complexity is O(log C) where C is the size of the range being maintained.

Candidates for an answer to a query lie on the path from x to the root.
If x is less than mid, we traverse left otherwise we traverse right.

We recursively perform the above steps until we arrive at an empty node or leaf node.

Query function takes the root and x in the query.
If root is null we terminate and return -Infinity.

We then initialize the current interval from left to right.
We initialize mid.

If x is less than the mid, we get the maximum of the query to the left side of the tree otherwise we do the same for the right subtree.

The time complexity is O(logC) because we pass O(logC) nodes.

Given n functions yi(x) = and q queries. For each query, you are given an integer t and you are required to find out (i ≤ i ≤ n) that minimizes the value of (t).

Given a tree with n nodes (1 to n) rooted at node 1. Each node has two values associated with it. The values for i-th node are and .
One can jump to any node in its subtree. The cost of a jump from node x to node y is the product od and . The total cost of a path formed by one or more jumps is the sum of costs of individual jumps.

For every node caclulate the minimum total cost to reach any leaf from the root node.

Note: root can never be a leaf, even if its degree is 1.

We are finding the maximum value x = among all lines formed by the nodes in its subtree.
Therefore we build a li chao tree for every node and merge it to its parent.

With this article at OpenGenus, you must have the complete idea of Li Chao Tree.

In this article, we discuss the different types of Parsing done by compilers such as Top-down parsing, Non-recursive predictive parsing and much more.

In this article, we have explored Symbol Table in Compiler in depth. We presented 3 different approaches to implement Symbol Table using Linear List, Tree and Hash Table data structures.