In this article, we have explored Symbol Table in Compiler in depth. We presented 3 different approaches to implement Symbol Table using Linear List, Tree and Hash Table data structures.

A symbol table is a data structure employed by a language translator, like a compiler or interpreter, within which each identifier in a program's source code is connected with information about its declaration or presence in the source code, like its type, scope level, and infrequently its position.

A symbol table is a significant data structure used in a compiler that correlates characteristics with program identifiers. The analysis and synthesis stages employ symbol table information to verify that used identifiers have been specified, to validate that expressions and assignments are semantically accurate, and to build intermediate or target code.

There are three data structures used to implement symbol table:

It is the simplest and most straightforward method of implementing data structures. To store names and their accompanying information, we use a single array. New names are added to the list in the order that they appear. To add a new name, we must first check the list to ensure that it does not already exist. If it is not present, it should be added; otherwise, an error notice, such as Multiply declared name, is shown. When the name is identified, the accompanying information may be found in the words that follow. To obtain information about a name, we search from the beginning of the array up to the location indicated by the AVAILABLE pointer, which denotes the start of the array's empty half. If we get to the AVAILABLE pointer without finding NAME, we have a problem — we've used an undefined name. 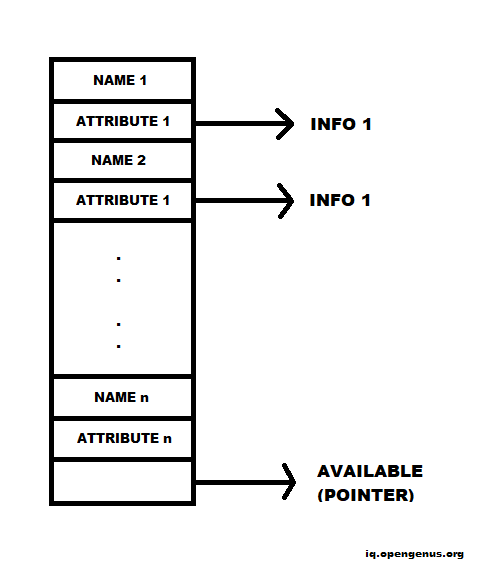 On average, we will search n/2 names to get information on the NAME. As a result, the cost of an inquiry is proportional to n.

One advantage of list organization is that simple compilers use the least amount of space feasible.

It is a more efficient method of organizing symbol tables. Each record now has two link fields, LEFT and RIGHT. The procedure below is used to find NAME in a binary search tree where x is originally a reference to the root.

Hashing table technique is suitable for searching and hence it is implemented in compiler. 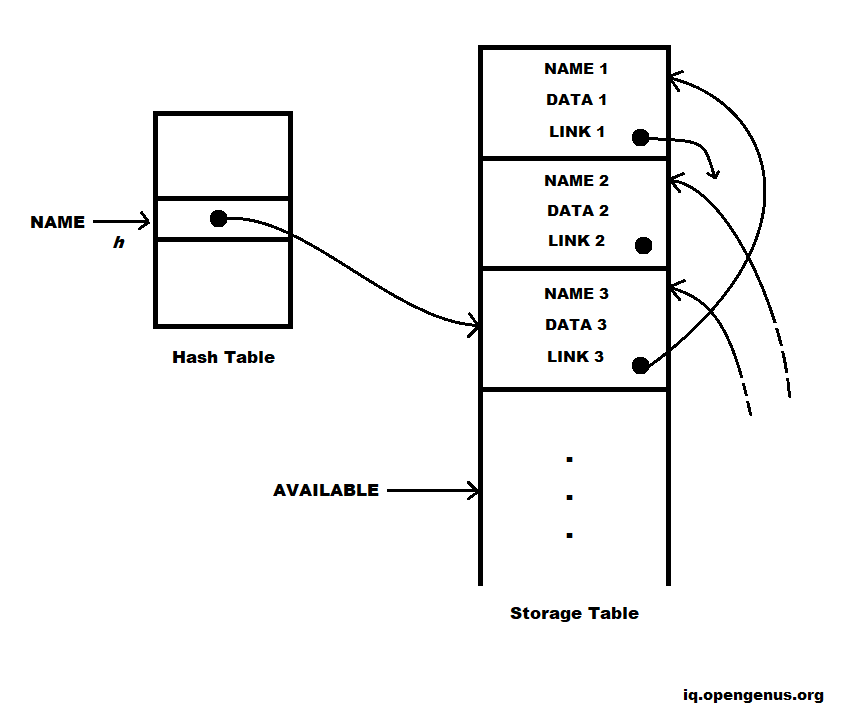 The fundamental hashing schema is depicted in the diagram above. Two tables are used: a hash table and a storage table.

The hash table is made up of k words with numbers 0,1,2,...,k-1.
These words are pointers to the heads of k distinct linked lists in the storage table (some lists may be empty). Each symbol table record appears on one of these lists.

We use NAME as a hash function h such that h(NAME) is an integer between 0 and k-1 to determine if NAME is in the symbol table.

Suppose we want to insert the above elements within the slots by using formula:

When h(name1) = h(name2) and name1 ≠ name2, a collision occurs. Because the name space of identifiers is significantly bigger than the table size, collisions are unavoidable. So, how does one handle collisions?

There are a few disadvantages to open addressing:

Chaining using different lists is an alternative to open addressing.

Symbol tables can be implemented in a variety of ways, but the most key distinction is how scopes are handled. This can be accomplished using either a permanent (or functional) data structure or an imperative (or destructively updated) data structure.
A persistent data structure has the property of not being destroyed by any action on it. In theory, whenever an operation modifies a data structure, a new updated copy is created, leaving the old structure unaltered.

An object file will have a symbol table containing the externally visible identifiers it includes. A linker will utilize these symbol tables to resolve any unresolved references during the linking of distinct object files.

A symbol table may only exist during the translation process, or it may be included in the process' output for later use, for as during an interactive debugging session or as a resource for creating a diagnostic report during or after program execution.

Many tools use the symbol table to examine what addresses have been assigned to global variables and known functions while reverse engineering an executable. Tools will have a tougher time determining addresses or understanding anything about the program if the symbol table has been stripped or cleaned away before being translated into an executable.

A compiler must do various tasks while accessing variables and dynamically allocating memory, which is why the extended stack model requires the symbol table.

The following is the scope nesting mirrored hierarchy of symbol tables: 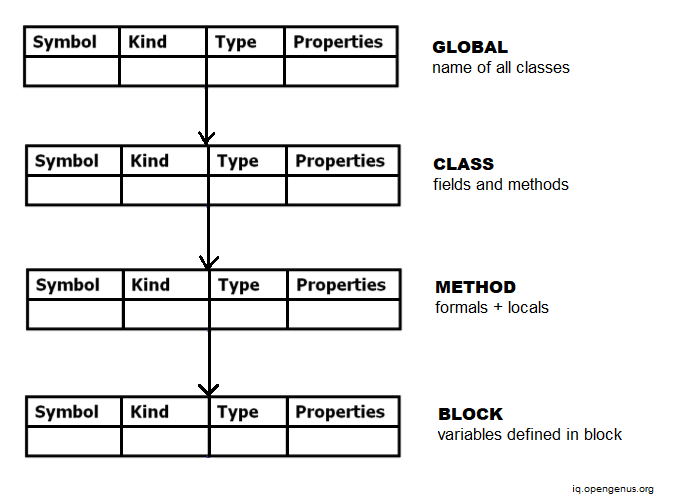 Scope information describes the declaration of identifiers as well as the parts of the program where each identifier is permitted to be used. Variables, functions, objects, and labels are some examples of identifiers.

The following are the main principles for scopes:

When the scope information is presented in a hierarchical fashion, a tree structure representation is formed. This format was created to address the disadvantage of the sequential representation being sluggish in looking for the necessary identifier.

The following is an example of how scope information is represented in a symbol table: 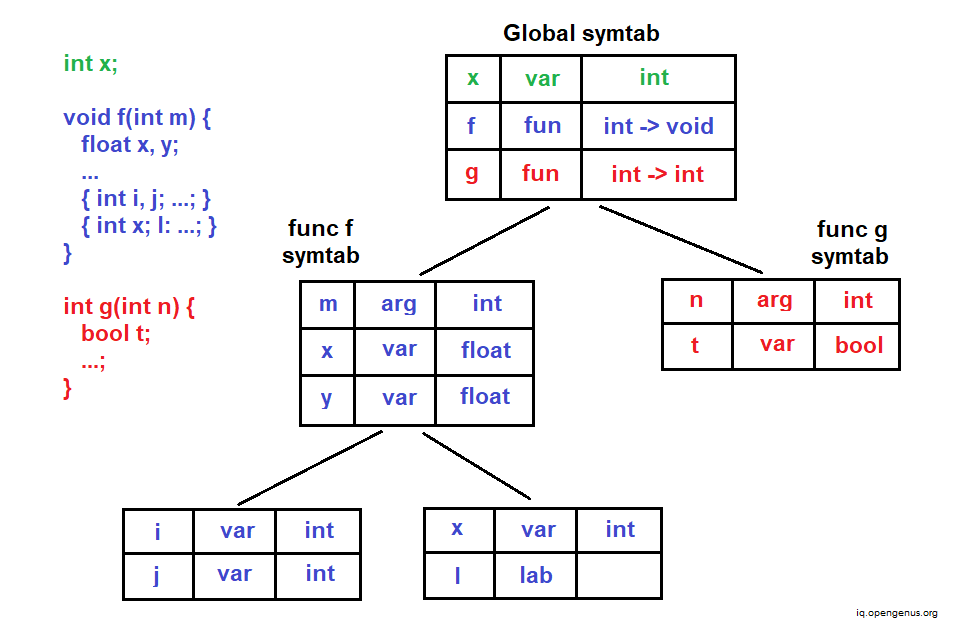 The hierarchical structure of symbol tables addresses the problem of resolving name clashes automatically (identifiers with the same name and overlapping scopes).

Initialize and Clear a Symbol Table

Lookup a name in a Symbol Table

Insert a name into a Symbol Table 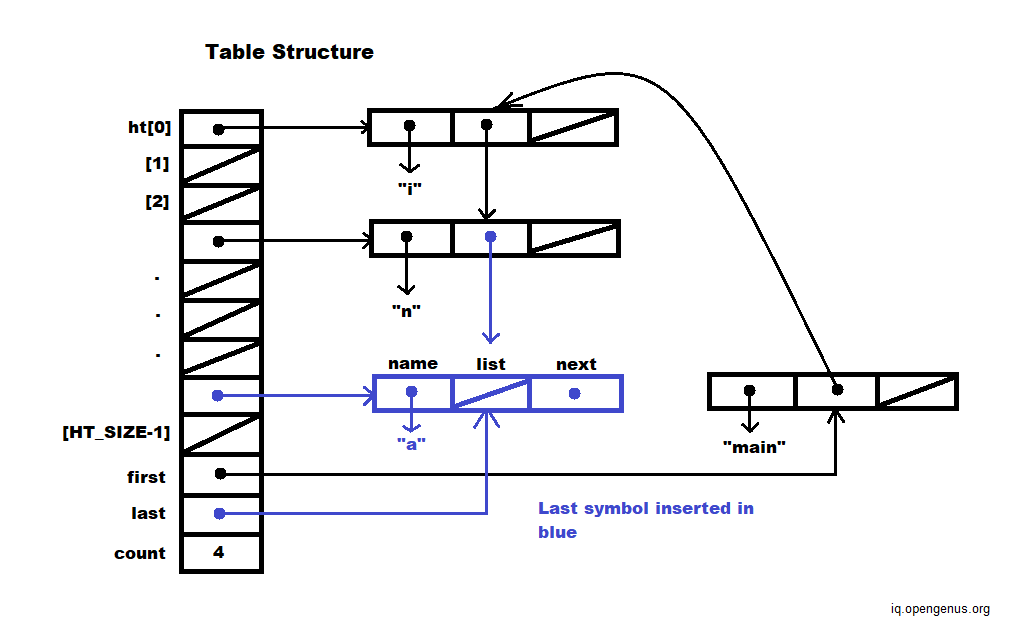 Lookup and then Insert a name

With this article at OpenGenus, you must have the complete idea of Symbol Table in Compiler.

In this article, we will understand the Complexity analysis of various Trie operations. We have covered Time and Space Complexity of Trie for various cases like Best case, Average Case and Worst Case.