In this article, we have explored the idea of Distributed Operating System in depth along with internal working details, different types and examples.

Distributed systems are becoming increasingly prevalent as a result of recent technical breakthroughs and advancements. Many of the world's most successful companies have developed complex distributed systems that can handle large numbers of requirements and upgrade without outage.

An operating system (OS) is a group of software applications that manage computer hardware components and offer common functions to computer applications. It is the fundamental software that enables a computer system to run and execute commands as intended. It is in charge of managing the user interface, hardware, and other software aspects. Operating systems include Windows, Linux, IOS, MacOS, Unix, Symbian, and Android, among others.

The platform would not be able to function without these operating systems, and it would just be a bunch of components emitting energy mindlessly.

A distributed operating system is a concept in which distributed programs operate on several machines that are linked together via communications. It is a new innovation in the technical world of computers; also, they are being accepted/used all over the world, since one of the key advantages of these systems is that they give high speed.

A distributed OS is a system that consists of numerous components situated on various computers that coordinate and communicate operations in order to seem to the user as a single cohesive operating system.

The functions and interface of a distributed operating system are the same as those of a monolithic operating system. That is, the purpose of both systems is to make the computational and storage capacities offered by the hardware accessible to the system's users.

New hardware can be added to a distributed operating system to expand storage or processing power, or to improve the availability of storage and computing facilities. The system interface stays unaltered throughout and after this modification. Transparency of access is an important notion. The upper interface is made up of powerful command interpreters and editors, which are backed up by a high-resolution graphical window system. Workstations are used to execute this software. Workstations are high-performance computer devices that include a CPU, memory, a bitmap display, a keyboard, a pointing device, and a network interface. Furthermore, workstations are frequently outfitted with a disk.The CPU is at least as efficient as those found in conventional computer systems, and the memory capacity is comparable or even more.

A workstation is assigned to a single person. As a result, the workstation sits inactive the majority of the time. As a result, it is tempting to utilize it as the primary computer asset for the user and maybe others as well. It might also be utilized independently of the remainder of the system in the event of a breakdown. We reject these workstation applications because we feel that workstations should only provide the upper interface.

Distributed systems require a network to connect all of its elements (devices, hardware, or software) so that they may exchange messages and interact. An IP address, cables, or even a circuit board might be used to link that network. Databases, objects, and files are among the types of data that are sent between machines in the form of messages. A distributed system's ability to consistently convey messages, whether they're delivered, received, acknowledged, or how a node retries after a failure, is a key aspect. Services and applications required to scale, and additional computers necessary to be added and managed, therefore distributed systems were born. 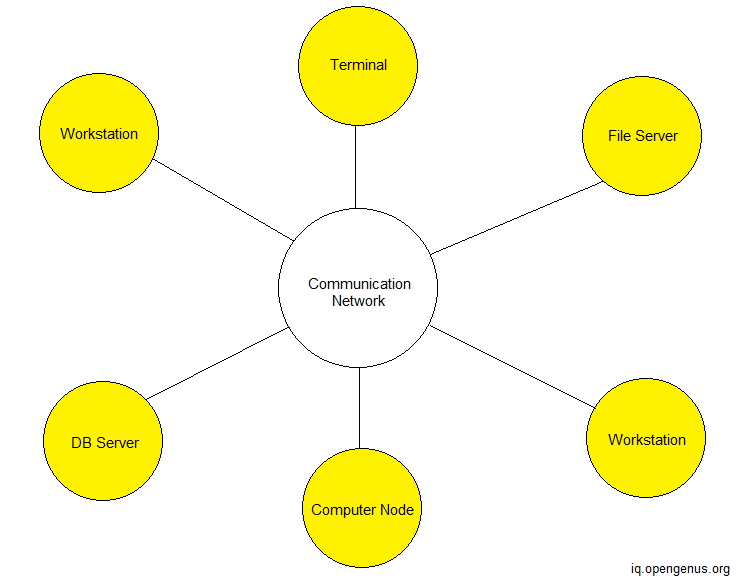 The different Types of Distributed Operating System are:

There are primarily kinds of distributed operating systems which are as follows:

In this approach, the client requests a resource from the server. The server, on the other hand, gives this service to the client. A single client communicates with only one server at a moment. A single server, on the other hand, may handle several clients at the same time. The system's clients and servers communicate over a computer network. It is also referred to as a "Tightly Coupled Operating System." This system is primarily intended for multiprocessors and homogeneous multicomputers. Client-Server Systems function as a centralized server since they approve all requests issued by client systems. Server systems are classified into two types:

The nodes play a crucial function in this system. The task is distributed evenly among the nodes. Further, these nodes can exchange data or assets as needed. They, once again, need a network to interact. It's also referred to as a "Loosely Coupled System." This notion is used in computer network applications since they involve a large number of processors that do not have shared memory or clocks. Each processor has its unique local memory, and these processors communicate with one another via a variety of communication channels such as high-speed buses or telephone lines.

Middleware allows all apps running on different operating systems to communicate with each other. Such applications are capable of transmitting all data amongst each other when they use these services. It provides for transparency in distribution.

Clients do not need to be witty in this architecture since the processing and decision-making is handled by a middle tier. This is where the majority of the initial web apps are found. The middle tier might be described as an agent that accepts stateless requests from clients, processes the data, and then sends it to the servers.

The n-tier application is an expansion of the 3-tier architecture in which your middle layer communicates with another service to obtain information. This is most common when the system has numerous pieces of separate business logic.
Microservices-based architecture is a famous example of an n-tier architecture. Each service is in charge of its own data, and it connects with other services to obtain the information it requires. As a result, a three-tier program usually becomes an n-tier application.

Characteristics of Distributed Operating System are:

In phone and cellular networks, DOS is beneficial. A DOS can be found in networks including the Internet, wireless sensor networks, and routing algorithms. DOS is used by many network applications, including the Web, peer-to-peer networks, multi-player web-based games, and virtual communities. Banking systems and airline reservation booking systems are two examples of such systems.

Differences between Distributed OS and other operating systems

Differences between Distributed OS and other operating systems are:

Advantages of Distributed Operating System are:

Disadvantages of Distributed Operating System are:

Because a system with only one instance of a vital component, such as a CPU, disk, or network interface, will fall down if that component fails, distributed systems are theoretically more dependable than central systems. When there are several instances, the network may be able to keep running even if some of them fail. Software failures might be considered in addition to hardware failures. Both hardware and software failures can be handled in distributed systems.

With this article at OpenGenus, you must have the complete idea of Distributed Operating System.