In this article, we have explained how to solve Fruit into Baskets problem efficiently using the idea of Sliding Window.

This problem is similar to Leetcode problem 904. Fruit Into Baskets.

The fruit into baskets problem is based on the idea of a farm which has a row of trees of various fruit. This row of trees is represented as a list, trees, where trees[i] refers to the type of fruit the i-th tree in the row produces.

The problem here is that you want to pick as many fruit from these trees as possible but the rules of the farm state that you cannot pick more than two total types of fruit. It is also stated that you can only pick one fruit from each tree.

Furthermore, you have to pick a starting tree and move one tree to the right every time, picking one fruit from every new tree tree. Our ultimate goal is to find the ideal starting spot so we can pick the maximum number of fruit possible.

In simpler terms, this long-winded question is essentially asking to find the longest contigous subarray with at most 2 integers.

The naive, brute force solution here would essentially be checking every contingous subarray of the input array and filtering for ones that have at most two elements and finding the largest such array. This approach is very ineffecient as you would be making many redundant checks. The runtime would be in the order of (n^3) as you'd need a nested for loop to collect all the subarrays then scan them for ones with only two unique numbers than ultimately find the max.

As you can probably imagine we can find a much more efficient solution.

This problem lends itself to a sliding window type solution. We essentially need to find the largest contigous subarray with at most 2 types of fruit. To implement this approach, we will create a sliding window that will start at index 0 and grow to the right at every iteration. Each time we add a new element to the sliding window we will count its occurences in an auxillary data structure like a hash map.

At the end of each iteration, we keep track of a running max which we will return in the end. 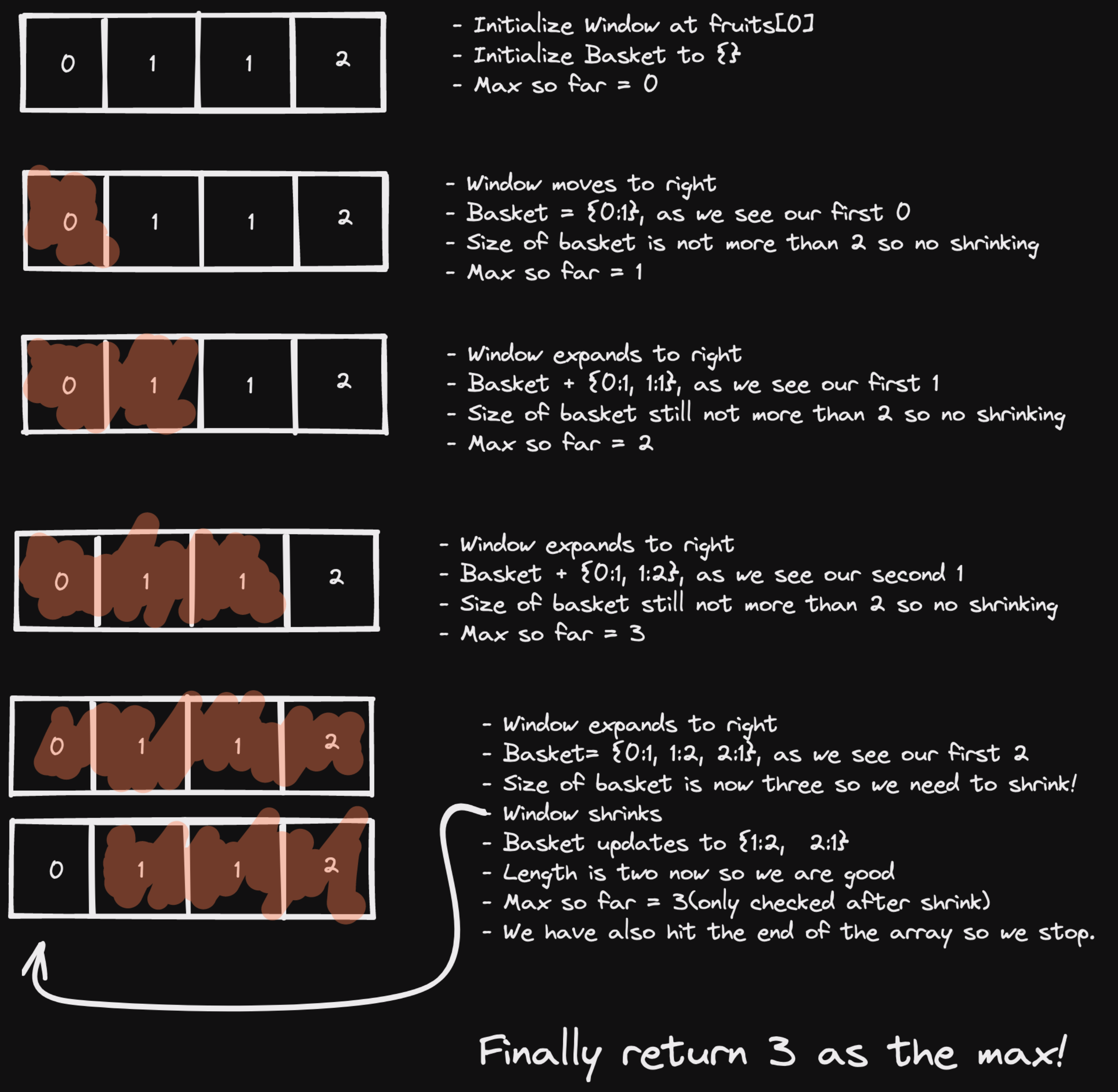 We can see how the window dynamically changes based on the contents of the auxillary data structure. Also, note that the running maximum is only calculated after any possible shrinking is done as it is possible that the window initially covers an invalid subarray but it will fix itself immediately after.

Also, if the question changed where the number of fruit types allowed was some variable K, we can easily change our code to account for that by replacing the check of len(basket)>2 with len(basket)>k.

The time complexity of this algorithm is O(n) were n is the length of the input list. This is the case as it only passes through the list once. And we don't have to iterate through the hash map to access its elements as it has constant time look up.

The space complexity of this algorithm is constant or O(1) as the hash map will only ever be length three at most and will not scale with the length of the input list.

This problem is similar to a few more Leetcode questions that are more general. For example the Longest Substring with At Most Two Distinct Characters and Longest Substirng without repeat characters.

The common theme amongst all of these(and more) is the use of a dynamic sliding window:

With this article at OpenGenus, you must have the complete idea of Fruit into Baskets problem.

Java provides users with certain statements that facilitate them to control the flow of their program. Such statements are called Control Flow Statements.

In this article, we shall be looking into the system design and architecture of Uber, a ride-sharing application that caters to millions of customers worldwide.